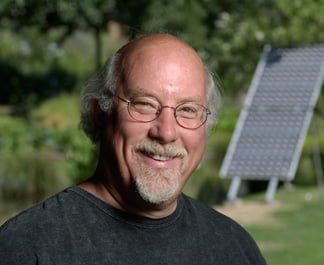 John Schaeffer was fed up. He just couldn’t bear to stand by for another moment and watch his magical environmental paradise and green slice of heaven deteriorate any longer.

So Schaeffer, a legendary pioneer in sustainable-living and solar, repurchased the 12-acre property in Hopland, Calif. for $1 million – 10 times more than what he originally bought it for in 1992 – to save it from extinction.

“Imagining a lock and bolt at the entrance of the property was horrifying to me,” he says.

Especially after how far his green dreamland had come over the decades.

Schaeffer’s Solar Living Center is the world’s first complete oasis of environmental living that showcases the powerful impact and remarkable possibilities for solar and all elements of sustainable living practices with regal sculpture gardens, waterways, ponds, and an vast array of environmental products for people wanting to live off the grid or just ‘green up’ their lives. The breathtaking park draws more than 200,000 visitors annually.

“There are not enough words in any language to convey what an impact John Schaeffer has had on solar, the environment and sustainable living,” says Jeff Swenerton of the Center for Resource Solutions, the non-profit organization behind the Green Power Leadership Award that Schaeffer just captured, one of the many honors he has received over his celebrated career.

“John is the original environmentalist. He saw the promise of solar before it was easy, cheap, or common. Then he taught people how to live lightly off the grid, and he trained an entire generation of environmental doers, not just advocates.”

Swenerton pauses for a moment and says with a laugh, “You know, it took decades, but the world finally caught up to John.” 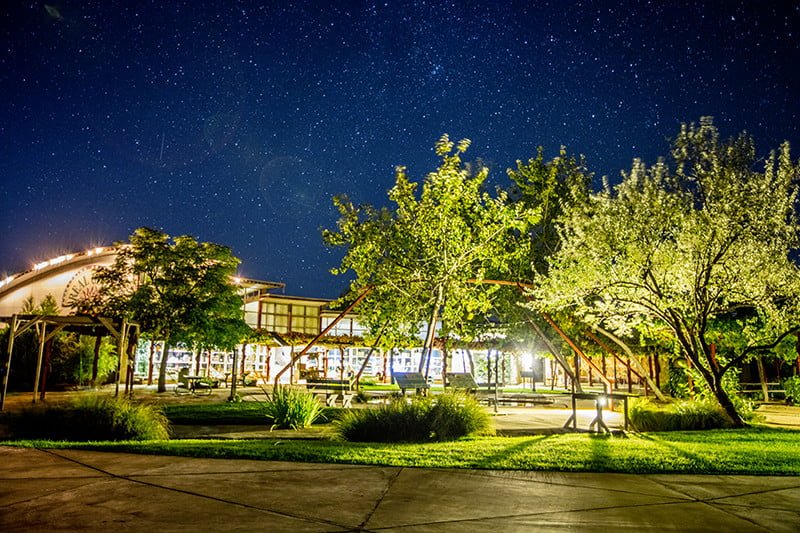 Early in his life, Schaeffer was entranced by the sights, sounds, smell and feel of nature. His home, for all intent and purpose, was the forests of Topanga Canyon, outside Los Angeles, playing with frogs and butterflies, exploring nature and embracing the environment like no other.

While studying at UC Berkeley in the early 1970s, Schaeffer became more and more intrigued with the environment and the most simplistic form of basic living. When he participated in the first Earth Day in 1970, his life’s mission and purpose was solidified – “I knew this is what I was born to do,” he says. “I had a natural affinity for nature. It was my calling.”

Shortly thereafter, he went to a Labor Day weekend retreat on a 300-acre off-the-grid commune in the hills of Mendocino County, Calif. — and remained there for the next seven years. He lived in a teepee, created a garden, grew his own food and mastered all the principals it took to live off the land.

“I learned from the bottom of not having anything,” he says.

It was at that time that Schaeffer sold the first workable solar panel, built the world’s largest environmental products store, Real Goods, and began formulating his strategy for his 12-acre nirvana, the Solar Living Center.

First, the solar panel: While Schaeffer was working at his newly-opened Real Goods store in Willits, Calif., a gentleman from Los Angeles showed up with a nine-watt photovoltaic in the trunk of his Porsche. Schaeffer scratched his head, wondering what it could be and how it works.

“We hooked it up to a battery and to our shock and surprise the battery was charging,” he says. “We couldn’t believe you could turn sunlight into electricity.”

It was a defining, monumental moment in time, not only for Schaeffer but for the world.

He ordered several panels and sold them the same afternoon, marking the first time in history that a solar panel was sold. He continued ordering more and selling them as quickly as they arrived. The cost of the first panel was $900 – nine watts at $100 per watt. Today, it’s less than $1 per watt.

“We were the only store in the world selling solar panels,” Schaeffer says. “When we sold our 1,000th panel, Atlantic Richfield executives flew here in their Lear jets and business suits, walked into this hippie store and said, ‘What’s going on with these photovoltaic panels?’” he adds with a hearty laugh.

At that time, no homes were powered by solar. Now, more than 1 million homes across the country are equipped with solar. 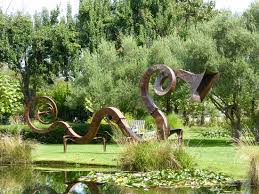 As hippies from New York, Los Angeles and San Francisco flocked to Mendocino County in the mid ‘70s to live off the grid, Real Goods began to thrive as the world’s leading one-stop shop where people could find everything they needed for their remote homesteads from sustainably-made household products, solar ovens, plastic bag dryers and kitchen compost bins to organic clothing and cotton, natural personal care products, children’s toys and hundreds of books on sustainable living.

By 1986, as the environmental movement of solar, conservation and recycling emerged to become a national phenomenon, Real Goods hit $1 million in sales. With his eyes on expanding, Schaeffer engineered a direct public stock offering, generating $3.6 million, paving the way to construct the Solar Living Center and launch a demonstration site for practices of renewable energy and sustainable living.

He found his new site off Highway 101 – a desolate, 12-acre property that was a dumping ground for Caltrans highway rubble. “It had one tree on the entire site,” Schaeffer recalls. He paid $120,000 for the property in 1993 with one dream: transform this wasteland into a lush green oasis. 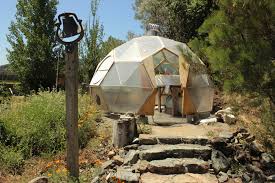 “We wanted to make an environmental paradise to show people what could be done with a brown field and an abandoned site,” Schaeffer says.

He did that – and much more. Yet, as Real Goods and its solar building division thrived in the late 1990s and became too big, Schaeffer was compelled to sell the operation to a bigger environmental company that could take the business to even greater heights. He remained as company President. But it was never the same for him.

Then, in 2014, when the Solar Living Center started to slip because of the owners’ indifference, Schaeffer stepped in, bought it back, injected several million dollars of capital into it and elevated it to where it is today – which is utterly and spectacularly breathtaking.

As the 101 freeway slows from four lanes to two in Hopland, Calif., Schaeffer’s green sanctuary comes into view. With massive ponds on both sides engulfed by spectacular landscape, it is like you’re driving into a different world … which you are.

The Solar Living Center, now in its 21th year, features an observation beehive, pollinator garden, children’s garden and cob playhouse, sculpture garden, permaculture vegetable garden, bamboo pyramid, hops tipi, a lavender labyrinth modeled after a 13th century French cathedral where visitors can mediate and release negative thoughts and worries, a bicycle-generator exhibit, a central Oasis with a water feature, a small lakefront, an intern village, a solar powered playground, a biodiesel fueling station, an organic farm, one of northern California’s largest solar arrays, a straw bale home, a bike station where you can generate electricity, the 5,000-square foot Real Goods store (the only store in the world made of 100% straw bale) packed with renewable energy products and sustainable goods, a garden of vintage cars with trees growing out of them, a Tumbleweed Tiny home, homes made of mud, a solar-powered cannabis dispensary, a rainwater catchment system, and an aquaponics display that shows how to grow produce in water by using fish.

As you grace the environmental shrine in awe, packs of goats follow visitors around like sweet dogs. Even the bathrooms are something to experience. The walls are made of recycled toilet tank lids and the counters and dividers are made from recycled pill bottles.

“It’s everything we want it to be,” Schaeffer says. “And much more.”