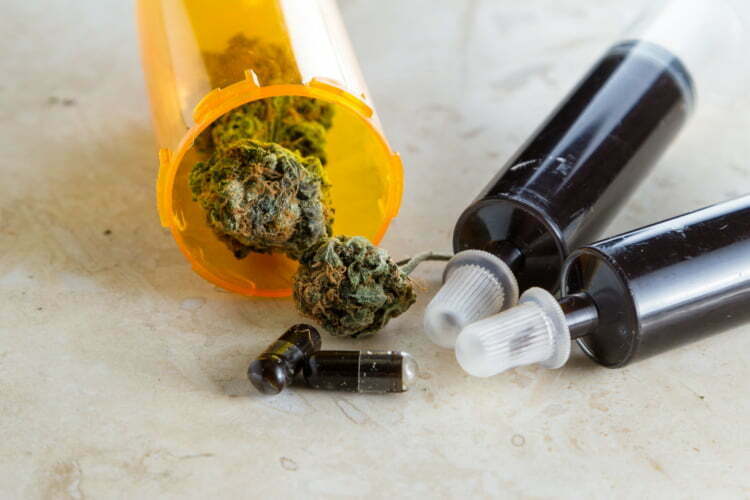 If you're struggling to manage certain medical conditions, delta-8-THC might be worth looking into. Here are the potential benefits you should know about.

Cannabis plants may only grow up to four meters high, but they contain more than 500 compounds. Many of these are phytocannabinoids, terpenes, and flavonoids. They even have omega fatty acids, the same stuff you find in healthy salmon or tuna.

THC is the most common of these compounds, but it exists in more than just one form. One of these is delta-8-THC, which is far less popular than cannabidiol (CBD). However, this particular THC compound has recently been the subject of growing interest.

So, what’s so special about delta-8-THC that it’s growing in popularity? What can it even help with, and what does science has to say about its effects?

We’ll answer all those questions in this comprehensive guide, so be sure to read on!

Tetrahydrocannabinol, or THC for short, is the most abundant of all phytocannabinoids. The most well-known form of THC is delta-9-THC, also known as delta-9, D-9 THC, or simply D-9. This is the compound responsible for making cannabis, specifically marijuana, psychoactive.

D-9 THC is also why marijuana is a Schedule I drug under the Controlled Substances Act (CSA). Substances in this class are those believed to have a high potential for abuse. As D-9 is psychoactive, the Food and Drug Administration placed weed in the Schedule I class.

Despite this “reputation,” though, scientific studies have pointed out Delta-9’s good side.

For starters, it may be helpful for nerve and fibromyalgia pain. Some users also report it helps with their inflammatory conditions, such as arthritis. Others say that THC helped them experienced positive effects on their mood disorders.

More than that, there are actually FDA-approved drugs that contain THC.

Marinol and Syndros (dronabinol) are two perfect examples. These drugs help treat nausea and vomiting in patients undergoing chemotherapy. The FDA also approved them for use in treating anorexia in patients with HIV/AIDs.

In chemistry, analogs are molecules or compounds that are similar to that of another. They share chemical or therapeutic similarities to say, a “parent” compound.” Their key difference lies in one or more of their individual atoms.

In this way, D-8 THC shares some similarities with D-9 THC. However, they’re not exactly the same, as there’s a variation in their carbon chains.

What Then Is the Difference Between Delta-8-THC and Delta-9-THC?

Delta-9-THC has a double bond located on its 9th carbon chain. This is actually the reason for the “9” in its name.

By contrast, delta-8-THC’s double bond appears on its 8th carbon chain. As you might have guessed, this double bond placement is the reason for the “8” in its name.

That may seem like a negligible difference, but it affects their psychoactive properties. According to scientists, the psychotropic prowess of D-8 is just about 50% to 75% of D-9. Meaning, delta-8-THC can be 25% to 50% less “mind-altering” compared to delta-9-THC.

Here are a few other things that set D-8 and D-9 THC apart.

The exact carbon bond placement of D-8 and D-9 also seems to affect how they work. In humans, cannabinoids interact with the endocannabinoid system (ECS) and cannabinoid (CB) receptors. The ECS, in turn, is a regulatory, cell-signaling system found in all mammals.

For example, studies have found that D-9 has a high binding affinity to CB1 receptors. As such, delta-9-THC stimulates the CB1 receptors, which, in turn, results in an altered psyche (AKA a “high”).

Delta-8-THC also seems to bind to CB1 receptors, but not as tightly as D-9 does. Early studies found that its binding affinity to CB1 receptors is three times lower than D-9. This may help explain why D-8 produces less of a psychoactive effect.

By contrast, delta-8-THC exists in much lower concentrations. Some reports say that in most cases, it only accounts for less than 1% of a bud’s total cannabinoid content.

The best way to confirm how much THC is in a cannabis product is to check it out through the maker’s website. Reputable delta-8 and delta-9 product sellers always publish lab test results online. These documents give an in-depth report of what exactly is in every item you buy.

Be sure to look for specifics on the product’s delta-8 content. It should tell you in exact percentage how much D-8 is in that bottle of THC tincture.

Which Conditions Can Delta-8-THC Help With Then?

As delta-9-THC makes up the bulk of THC, it has always been one of the main subjects of scientific studies. That’s why there’s not a lot known about the medical benefits of delta-8-THC. It’s also important to note that most studies done on delta-8-THC uses were on animals.

Despite that, existing scientific findings on D-8 show promising positive effects. Let’s take a look at what science has to say on this THC analog.

May Help With Appetite Loss

A 2004 study looked at the effects of delta-8-THC on mice consumption. The researchers found that the mice given D-8 THC ate more than the control group. They also noted how D-8-treated mice had a higher consumption rate than those treated with D-9.

These findings suggest that delta-8-THC may be helpful for people experiencing appetite loss.

Keep in mind that long-term appetite loss can result in extreme fatigue and rapid weight loss. It can also lead to a faster heart rate, which can disrupt healthy heart functions. Loss of appetite can also induce malaise, which is a general feeling of being ill.

More than that, chronic appetite loss can ultimately result in malnutrition. Insufficient nutrition, in turn, is a leading cause of anemia and vitamin deficiency. In the US, around one-third of people are either at risk of vitamin deficiency or anemia.

May Help Ease Nausea and Vomiting

Cesamet, or nabilone, is another THC-containing, FDA-approved drug. Like Marinol and Syndros, it helps reduce nausea and vomiting in chemotherapy patients.

As a THC analog, delta-8-THC may also be helpful in similar situations.

Going back, the study involved administering D-8 to eight young cancer patients. The kids were between the ages of 3 and 13, and the entire study followed them for a period of 8 months.

According to the researchers, the treatment completely prevented vomiting in the young patients. They further noted the observed side effects to be negligible.

With that said, D-8 may be helpful in conditions that involve nausea and vomiting.

May Be Helpful for Eye Pain and Inflammation

Experts estimate that about 2.4 million eye injuries occur in the US each year. Of these, around 100,000 cases involve accidents with common household products. However, most occur in workplaces; as many as 2,000 each day, or 730,000 injuries a year.

Corneal injuries are among the most common, as the cornea is in the front-most area of the eye. Its location makes it prone to scrapes, scratches, chemical injuries, or even UV damage. Improper use of or ill-fitting contact lenses can also injure the cornea.

This high prevalence rate prompted scientists to test delta-8-THC on corneal injuries. One of the most recent studies (2018) involved mice models with injured corneas. According to the researchers, D-8-THC helped with injury pain and swelling.

May Have a Role in Tumor Treatment

Scientists have also looked into the potential effects of delta-8-THC on tumors. An older study involved using D-8 on mice with lung tumors.

The researchers noted that tumor sizes decreased after 20 days of treatment. Moreover, they reported an increase in the mean survival time of the D-8-treated mice.

Sadly, not a lot of follow-up studies took place after this one, though. There’s definitely a need for more in-depth investigations on D-8’s effects on tumors.

May Be Helpful for Other Pain-Related Conditions

Most sources that cite delta-8-THC as helpful for other pain conditions are anecdotal. There are also very few scientific studies validating D-8 THC’s role in pain relief. However, researchers note that D-8 may have a synergistic relationship with pain medications.

In any case, some delta-8-THC consumers report feeling less pain with the use of the compound. Some also say that they feel less anxious because it has a reduced psychoactive effect. It’s possible that they feel less of either, as pain can make one more anxious, while anxiety can magnify pain.

May Play a Role in Seizure Treatment

Some researchers looked into the potential benefits of delta-8-THC on seizures. In a 1982 study, the scientists noted that D-8-treated rats had fewer seizure incidents. The same was true for the animals administered with delta-9-THC.

A more recent comprehensive analysis found disparities in the results, though. However, most of the reviewed studies used delta-9-THC. This is still significant, given the similarity between D-8 and D-9.

In many of the studies, THC was helpful in seizure-related incidents. In some, though, it either appeared to trigger seizures or not have any beneficial effect at all.

Neurons, or nerve cells, are the brain’s specialized worker cells. They transmit information to other nerve cells, gland cells, and muscle cells. They receive and process sensory inputs and command muscles to move as you want them to.

Neurons are also crucial to cognitive processes, like memory, perception, and understanding. They’re a key component of learning and retaining information.

So, when neurons die, people can lose one, two, or all of these functions. Dementia, such as Alzheimer’s disease (AD), is a perfect example of what can happen due to neuron death.

Researchers found that delta-8-THC may have a role in keeping neurons functional.

One way that it may do so is by increasing acetylcholine (ACh) levels in the brain. ACh is a key neurotransmitter with roles in learning and memory. Lower levels of ACh, in turn, appear to have a link with AD development.

There’s not enough known about AD yet, so these findings require more follow-ups. Hopefully, scientists will keep studying how D-8 may be helpful for dementia.

What Other Potential Delta-8 Effects Should You Be Aware Of?

Even if D-8-THC has a lower potency than D-9-THC, it can still cause psychoactive effects. As such, taking D-8 can propel you up high, so make sure you prepare yourself.

Since D-8 can still alter your state of mind, you may experience anxiety. However, some consumers say they remained clearheaded after taking D-8. They also reported feeling calmer and more relaxed with D-8 than D-9.

One more thing: both delta-8 and delta-9 will show up on drug tests. That’s because most standard drug screening procedures look for THC metabolites. D-8 produces the same metabolites as D-9, so its use can still trigger a positive test result.

Delta-8-Tetrahydrocannabinol May Be the Next Big Thing

There you have it, your ultimate guide to delta-8-THC and all the potential good things it may bring. Now, you know that it may be helpful for nausea, vomiting, appetite loss, or even pain.

However, keep in mind that as a THC analog, it’s still psychoactive. So, if this will be your first time taking it, make sure to start with a low dose and always take it in moderation.

Ready for more health, fitness, and lifestyle guides like this? Feel free to check out our other educational news and blog posts then.