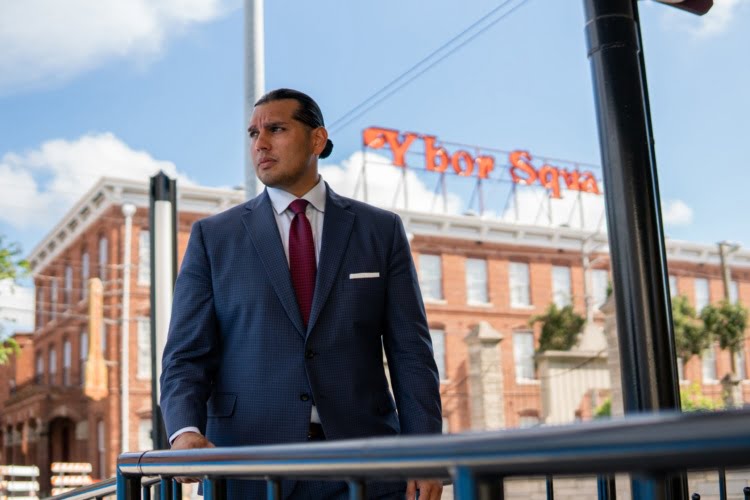 Anyone can strategize. Omni Public helps disruptive new brands team-up with government entities not just for profit, but for the greater good.

Cesar Hernandez, founder of public affairs firm Omni Public, knows what emerging tech companies need to succeed. No, not the obvious things that all startups need, like funding and a clear mission. Disruptive brands, companies with products so new and unusual that people don’t know how to categorize them, need a partner in their state’s capital.

Hernandez says the path to market acceptance goes through an unlikely ally: state and local government. Young startups and career politicians may seem like the oddest of couples, but the pairing benefits all parties when done right.

“If you start with the community in mind,” he says, “and you’re sensitive to the laws, that will allow you to properly engage.”

It was this inspiration, that disruptive tech, when brought in at the community level as lifeline or societal betterment, that persuaded Hernandez to quit his comfy government agency job and found what would later become Omni Public three years ago. Startups typically need some help with elected officials and those with undefined sectors essentially need to create an industry.

“I’m an expert in government procurement and how private companies can interact legally with the government.” — Cesar Hernandez, founder of public affairs firm Omni Public

When startups want to roll out their tech, one of the best ways is to introduce it at the community level, with local leaders already on board.

“That’s very important because if you are brand new and there is not a regulatory framework, if you do it wrong, you could be banned or have to dig yourself out of a hole.”

That’s where Omni comes in, whether to make introductions at city hall or strategize behind the scenes.

“We work to make sure that as new tech becomes more accessible, the government creates the proper framework. We help you bring your tech to fruition and be respectful of the laws and the community receiving the tech.”

As for the governments themselves? They’re already playing catch-up with incoming technology, so a partnership that solves a community problem or makes life better for their constituents is something they want to be a part of.

The first time Hernandez did this was with none other than Tesla, who was producing a rideshare program exclusively for Tesla owners. He connected Tesla with Tampa, Florida public officials. “The project produced the world’s first public private transportation network rideshare program dubbed Hyperlink. The program increased ridership over 400% in the area it was implemented. It was since moved to downtown Tampa and was selected as one of the Urban Planners Choice Award.”

“I got the bug for disruption theory and had a hunch that if companies that were so large, like Tesla, were working on their novel initiatives, then the world was not void of good ideas and good people to bring these ideas to market.” — Cesar Hernandez

The Tesla project snowballed for Hernandez, who now serves as a public affairs and government relations consultant to Hyperloop Transit Technologies group, creators of futuristic transit tubes connecting cities via pressurized capsules designed to move over 100,000 commuters each day. Hyperloop was popularized by Elon Musk who made his Hyperloop white paper public back in 2013.

He also consults with 2019 Startup of the Year, Bird Rides, providers of rentable electric scooters based in Santa Monica. Hernandez helped the upstart bring its scooters to the American southeast.

“We work with emerging startups all over the world, the UK, South Africa, and Latin America,” he says. “We have superior expertise in disruptive technology and new, innovative ideas and concepts, then help bring them to market and engage the media and government”

In fact, if government relations are well-established, Hernandez and his team offer other services, like public relations, helping clients establish notoriety, credibility, and placement in large publications, all excellent bullet points to showcase to investors and government agencies.

But Hernandez’s true motivation in his work is helping new companies promote products that help make the world a better place. Omni Public — a reference to how many of their packages offer public outreach and public involvement strategies — has a powerhouse team of experts, associates, lobbyists, and operations personnel to serve clients large and small.

As for what’s on the horizon, Hernandez says, “We’re ready. We are not laggards. I am inclined to be receptive to projects that move society forward. We are progressive strategically and politically, with projects that focus on transportation, mobility, and tech, plus social equity issues.”

Omni’s 2020 lobbying efforts in Florida have centered on social justice and affordable housing legislation. After a day of work, Hernandez says he wants to be able to sleep at night with the decisions he’s helped solidify. It’s also why he wanted to launch his own firm and never have to sacrifice his ideals.

But why do business with him? “I am the best in the business when it comes to emerging technologies. Nobody else has an advantage when it comes to undefined sectors however, I am also an expert in disruption theory and how markets move.”

And after the kind of year that 2020 has been, with a global pandemic, social justice movement, and chaotic American election, Hernandez’s most valuable asset is his comfort in uncertainty.

He was raised in Brooklyn before it became the gentrified hotspot that it is today.

“By the age of 22, I was arrested six times, shot at twice, survived homelessness in Brooklyn, and have had friends murdered. Being a position where you can bootstrap your life and face that adversity and uncertainty, I think I can handle PR.” — Cesar Hernandez

“In the realm of consulting, everything is going to go wrong. Navigating uncertainty is the norm. I can be absolutely confident, because it was those very same instincts, that I had to rely on to survive on the streets.”

It’s no longer life or death, but he works to ensure a client is successful or legislation is passed.

“My clients respect that I’m calm,” he says. His confidence and demeanor helped Omni when coronavirus first struck in the US in early 2020. The firm’s pipeline of potential clients dried up, but they did not lose a single existing customer.

When he moved to Tampa, he says the city opened him with open arms and he’s motivated to stay there and help it grow. Tampa, he says, is an emerging market and city on its own. Omni also maintains a New York City office and has a presence in Los Angeles.

“My biggest clients have come out of California organically; our partner is there to help those clients. There is so much disruption there, it’s overflowing. We help them grow in a really smart way.” 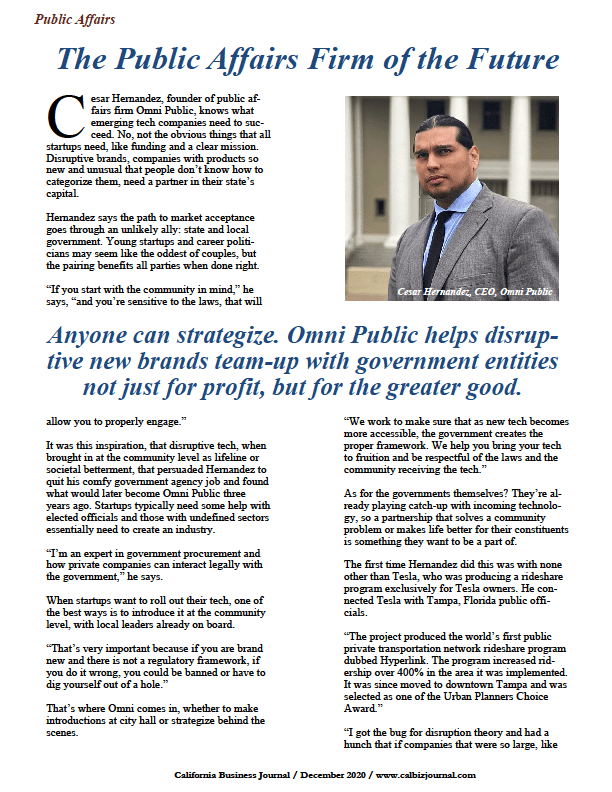 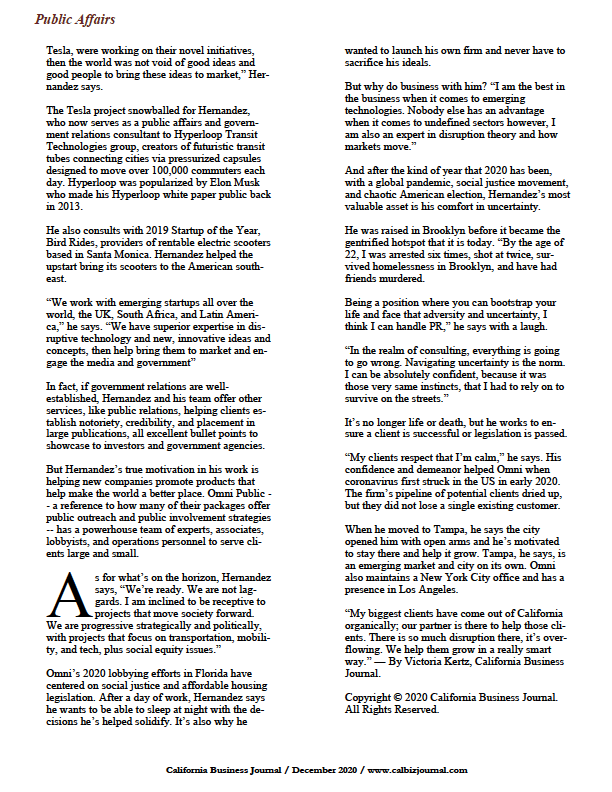 Prop 27 in California: What You Need to Know Ahead of the November Ballot

How To Calculate The Value of Private and Public Procurement Contracts