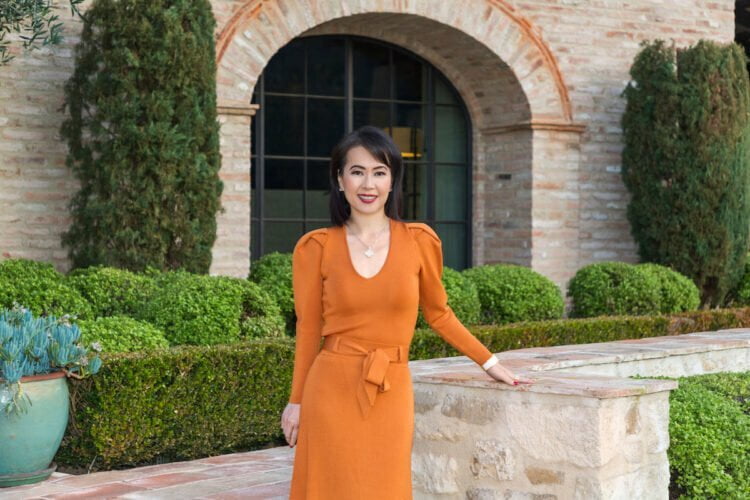 Working her way to the top of the Luxury Residential Real Estate Market in affluent Orange County, Calif., Thompson is now one of the highest producing agents, with $1.75 billion in career sales.

Jacqueline Thompson’s immediate breakaway into the multi-million mansion market may appear seamless from the outside. That is until you consider she is one of 12 first generation siblings in an immigrant household.

“We got by wearing donated hand-me-downs from a local church and buying bruised fruits in bulk,” she says, while also recalling how her family grew their own organic vegetable garden so that her mother could home cook every meal.

From a very early age, “I had an intense desire to work,” she says, “because of the gratification and fulfilment I felt.”

She was determined to attain a worker’s permit as a young teen so she could start contributing. Clearly, her fierce drive paved the way for her remarkable, nearly unparalleled, success.

She emerged as a stellar student and was accepted to the University of Southern California, where she earned a Bachelor’s of Science degree in Business, and wound up working for one of the Big 5 accounting firms.

“I survived on a potato-rich diet to pay off my student loans,” she says.

She also had a $250,000 mortgage for her historic Floral Park home at the time, that she shared with her then-fiancé, now-husband. They borrowed $5,000 for a down payment.

“Working at the accounting firm was great at the time but ultimately I decided it wasn’t for my future.”

She resigned and rested up for her next venture. “I was sitting at home, a little bored, and started flipping through a magazine I had just received,” she says. She came across an ad on luxury real estate that peaked her interest. “It was understated, but impactful.”

“Within a second, I decided to return to school to take real estate classes.”

Shortly thereafter, she called the agent from the ad who happened to be No. 1 realtor for Coldwell Banker in the U.S. at the time. She interviewed with the agent and was offered a position with his real estate team.

Just two years later, in an astonishing feat of accomplishment, Thompson set a price-record sale within Newport Coast’s esteemed Pelican Point community –– which happened to be pictured in the real estate magazine that launched her real estate career.

Working her way to the top of the Luxury Residential Real Estate Market in affluent Orange County, Calif., Thompson is now one of the highest producing agents, with $1.75 billion in career sales, alongside one of the state’s most prestigious firms, Surterre Properties. She has launched her own group within the firm – The Jacqueline Thompson Group.

“Every single individual going into real estate sales in Orange County dreams about one thing – selling the ‘California Riviera,’ which spans portions of Pacific Coast Highway – from Newport Beach and Corona del Mar to Newport Coast to Laguna Beach. Less than 1% make it.”

Thompson accomplished the near impossible.

Thompson wields a selling average of $125 million per year — despite market conditions — with an average selling price around $7 million.

In an unanticipated turn of events, the COVID-19 pandemic resurged the “mega mansion of yesteryear,” she says, as reports show that the 2021 rebound in property market sales from a near market halt the year prior can be directly correlated to a homeowner’s demand for space.

“People’s homes became their havens –– their office, their getaway; they weren’t allowed to leave the house at one point,” she says, noting its global impact given lockdowns and travel bans. “People became motivated to buy their dream home sooner than later.”

Two years later, COVID-19 completely disrupted the corporate real estate market. But now, remote working is here to stay, developing into a non-negotiable option for employees and a competitive factor for companies to retain talent.

From canyon to coast, Thompson has led Orange County’s luxury sector for more than a decade. She has reached $1.75 billion in career sales to date and has been recognized as a top-producing agent nationwide by the Wall Street Journal.

“It’s never been about making the money for me. It’s about being No. 1 and serving my clients well,” she says. “I specifically chose Shady Canyon and Newport Coast as my areas to specialize in because they’re the most exclusive areas in Orange County.”

During the first four months of 2019, the market was slow: there weren’t any sales over $10 million in Newport Coast or Crystal Cove. However, during that same time period, Thompson sold a home in nearby Shady Canyon for $10,275,000. The sale had people talking – including top agents on the coast – who called her and asked, “How did you make that deal happen?”

Now at the height of her career, she realizes that along the way she fell in love with the real estate process. “For 20 years, I’ve helped families find their home. I’ve watched them give birth to their babies,” she says. “Now their babies are about to graduate from high school or from college, and I get to help the next generation, firsthand.”

“With property sales, you must always keep people’s best interest at heart. These are long-term relationships –– the one between you and them, the one between them and their forever home –– that you’re building all at once,” she concludes. “Once people trust you, they will not forget you.”

News Report: Las Vegas Real Estate Has Appreciated by 235. 99% Over The Last Year

Why Work in Real Estate?