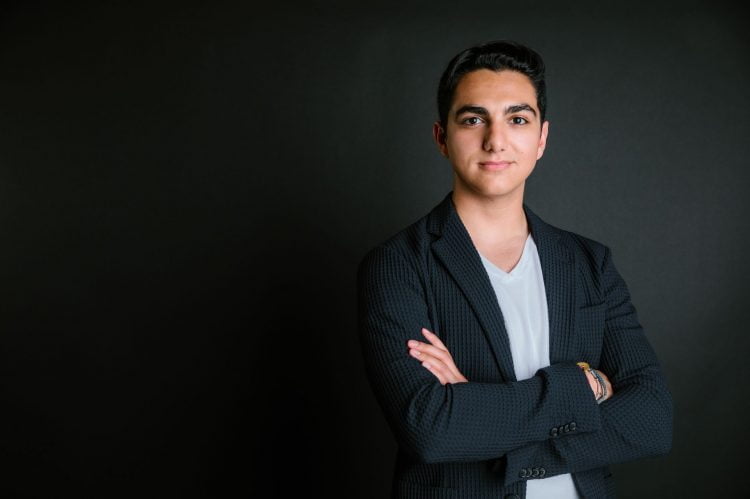 At the age of 13, Milan Kordestani started breeding turtles and selling them to aquariums all over the country. He hasn’t stopped hustling since.

Raised amid the start-up culture of Silicon Valley, Kordestani, now 22-years-old, can already reflect back a decade on his first business venture.

“I grew up around entrepreneurship, and the path to building things; and that desire to build has always when there,” he says. “When I was 13, I got a pet turtle and, as part of Gen-Z, the YouTube generation, I learned all about the buying and selling of rare breeds of turtles, and I started breeding turtles and buying and selling them to people’s aquariums all over the country.”

His matriculating years found Kordestani further coming out of his, well, shell.

Now the founder and CEO of a trio of diverse companies (along with a fourth passion project), the self-described serial entrepreneur has, in short time, established a pattern of belying the status quo.

“There’s definitely an intent to try and do things a different way; and I kind of joke that the start-ups I work on are based on problems that I’ve personally encountered, and then trying to find a solution,” he says. “And it’s not about a distrust of people older than me, but rather observation, noticing that the way things were built and the way things operate isn’t necessarily the way things need to be.

“This is a great era we live in,” he adds, “and I think our generation has so many passionate people who are more interested in finding ways to live their lives and finding career paths which allow them to pursue what they find valuable in the world – more than just trying to pay rent and live a 9-to-5 lifestyle.”

Of his present endeavors, Kordestani’s tune dates back furthest to Guin Records, which he co-founded in 2018. Putting more control in the hands of the artists, the Los Angeles-based boutique label currently works with five curated hip-hop artists around the country.

“It’s pretty amazing how music is such a significant part of college life. In my early college years, I started to realize that the artists I loved were not what the mainstream was supporting,” he says. “Specifically, in the hip-hop genre, there was so much negativity; and that’s not to speak ill of it, because the genre is rooted in a historically dark place and is an expression of a lot of pain. But, by focusing on artist who are true lyricists – even it if does involve that pain or struggles – it’s through a lens of storytelling, and there’s a purpose to that story.”

With artist’s having more control than ever over their ability to distribute their music, Kordestani and his Guin team of six place an enhanced onus on themselves to both support the artist’s vision, and to step up the marketing efforts.

“Labels used to be these gatekeepers,” he says. “But it’s so much easier to put out music now; arguably, there’s never been a better time in history to be an artist, because you can literally make music on your phone, distribute it across all these platforms and start making money within a week.”

The year following Guin’s debut, Kordestani turned the dial toward an evolution of the college freelance marketplace model, debuting Dormzi, a one-stop-shop for students to both access and monetize their talents as gig workers.

“We saw this massive pool of talented people with unique skill-sets who were hungry to work, to earn,” he says of Dormzi. “It was an initial vision of, ‘Let’s turn everybody into a freelance entrepreneur.'”

Initially launched at multiple colleges before the pandemic hit (and emptied campuses), the peer-to-peer marketplace features services ranging from tutoring to fitness to photography, entertainment and design – all at cost-efficient pricing. As the site continues to empower collegiate entrepreneurs, Kordestani and his team are in-process of evolving the tool with further vetting via a quiz-questionnaire to better hone-in on what skills the freelancers should offer.

From music to freelancers to words, Kordestani may have made his biggest imprint to-date with The Doe (thedoe.com). Founded in 2019 as a media company, the online publication produces anonymous content in an effort to humanize its readership through shared experiences.

“It’s a space for the average person with a very compelling idea or experience to share their stories, and to do so without retribution,” Kordestani says. “There needed to be a place for people to do this anonymously. What we realized pretty quickly was that this isn’t a space for a bunch of journalists; in fact, it’s one of the only spaces specifically not designed for the average journalist. It’s designed for the average person, who doesn’t want their name on things, doesn’t want to be famous and doesn’t want credit – they have an amazing story that they want people to read and think about.”

As an example, recent Doe story titles include: “The Car Accident that Changed My Life, and Killed My Best Friend,” “Billy Joel Sucks (and it only took me 30 years to realize it),” and “I Regret Having a Baby I Never Wanted.”
Kordestani’s aims with The Doe are to create empathy through the safety of anonymity.

“Sometimes the things we publish are controversial, and we’ll get some push-back,” he says. “Not everybody is going to support every article, but that’s what happens when giving voice to marginalized voices, people who have important perspectives that may not necessarily be the most popular view or easiest story to share. Maybe, for example, it’s somebody going through a mental health crisis, but they don’t want their whole family to know that they published the piece or want somebody involved in the story to be sensitive about it.”

For the young founder, Kordestani doesn’t see his diverse entrepreneurship as a juggle, but rather an opportunity to keep building with the bricks of a new generation.

“I come from a unique background that has enabled me to do all of this,” he concludes. “I have the resources to do these things, so, for me, it’s a mindset of, ‘If I can do these things, why wouldn’t I?’ Every day, I wake up feeling grateful for being able to build things.”