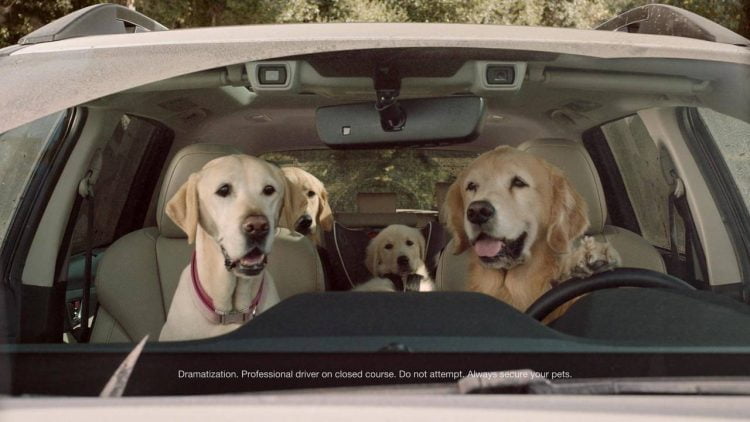 Business is Going to the Dogs — Literally

The presence of dogs in commercials and digital ads stimulates the production of happiness hormones and produces trust.

Dogs are appearing with increasing frequency in commercials, advertising everything from avocados to beer to cereal to ketchup to cars … and the list goes on.

Dog photographer Michael Puck says that the mere presence of dogs not only immediately engenders trust but also stimulates the production of the “happiness hormone” (oxytocin) making people feel warm and fuzzy.

That’s the reason that when dogs are used in ads, customers are 56% more inclined to make a purchase.

As a child, Puck suffered a serious burn that put him in an isolation unit where he saw no one but doctors and nurses. Not even his parents could visit him. He was pumped full of pain killers and couldn’t comprehend his predicament. He withdrew, curled into himself, and developed a distrust of people, even after he was old enough to understand what had happened.

He became a loner until his family got a black lab named Cora.

“I instantly bonded with her. We spent hours walking through the woods, along the rivers, and built a relationship that was unmatched to any relationship I had with human beings at that point,” Puck says. “She was the one who re-introduced me to my environment. She was so social and cute, and everyone came running when they saw us out and about. I reconnected with people. I don’t know where I would be if I had stayed on the trajectory I was on — she saved my life.”

Puck is returning the favor to the canine world with his nonprofit, K9Photo, which has the goal of saving 1 million dogs by 2030. Partnering with the best dog photographers around the world, Puck is also launching the Global Dog Art Gallery to curate breathtaking dog wall art collections for relationship-focused businesses.

Puck is an HR professional and refers to himself as a people scientist who studies the way people interact with each other. He has researched the science behind human–canine interactions and phototherapy, a practice of using photography to elicit positive emotions. He says that especially in the time of Covid, people have a strong need for connection, and dogs are natural catalysts for bringing people together.

Gorgeous photos from the Global Dog Art Gallery hang in the showroom of Friendship Enterprises, a Ford dealership in Bristol, Tenn. Says President Mitch Walters, “The dog art photography displayed in our dealership is awesome. The fact that we strongly support animals in our region — and a popular Goldendoodle is our mascot that is featured in all of our marketing — makes this display more powerful. Dogs always provide people with comfort and happiness. The photos are so unique. They really make our customers feel at home.”

Puck is working to develop partnerships with more car dealerships, medical offices, and financial buildings to feature dog art. All of the profits earned from this business venture are going to prevent animal suffering and protect their lives.

“Businesses have indeed gone to the dogs,” Puck concludes with a laugh. “But for very compelling reasons — to instantly build connections and foster trusting relationships.”

What You Should Be On The Lookout For If Your Dog Is Prone To Hip Dysplasia
Tags: advertisingArtAutobeerbestBusinessbusinessescarcarsdoctorsdogsfinancialhomehormonesHRmakingmarketingmedicalnaturalrelationshipsSCsciencetrust
ADVERTISEMENT