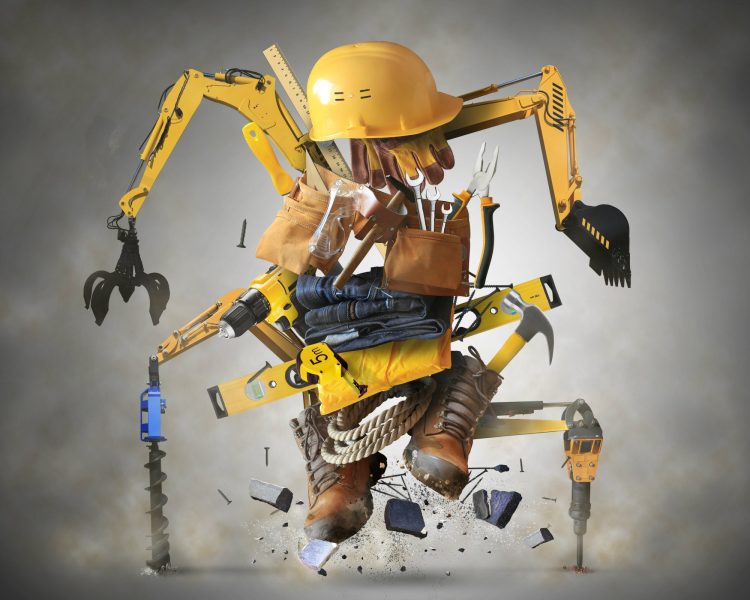 The historic portrait of the post-work-day construction laborer is receiving a touch-up. Long-imaged as arriving back at home with bad back, cramped hands and wrecked neck, today’s construction crews have a few new innovative tools to aid with what ails.

The automated tandem are the brainchildren of Construction Robotics (CR). Since the company’s founding in 2008, CR has paired engineering smarts with on-site construction and manufacturing savvy, positioning the firm’s unique grasp of real-life situations on job sites.

“Our vision is developing products that can increase productivity and help with ergonomics, both of which are massive needs in the construction industry,” says Scott Peters, president and co-founder of New York-based Construction Robotics. “We have the fortunate timing of being one of the first robotic construction companies out there. The future is bright for the solutions we bring to the table which, at the end of the day, is really all about augmenting and protecting the worker.”

The benefits of its dual robotic creations are myriad, including increased building productivity; increased worker safety, and, as a key byproduct of the latter, vastly reducing insurance costs with fewer employee injuries.

“When you think broadly about worker safety, construction remains one of the highest occupations out there from an injury standpoint and from an insurance claims standpoint,” Peters says. “A shoulder injury alone can cost $70,000 or more.  And contractors are very aware of that; it’s a very real part of their daily life.” 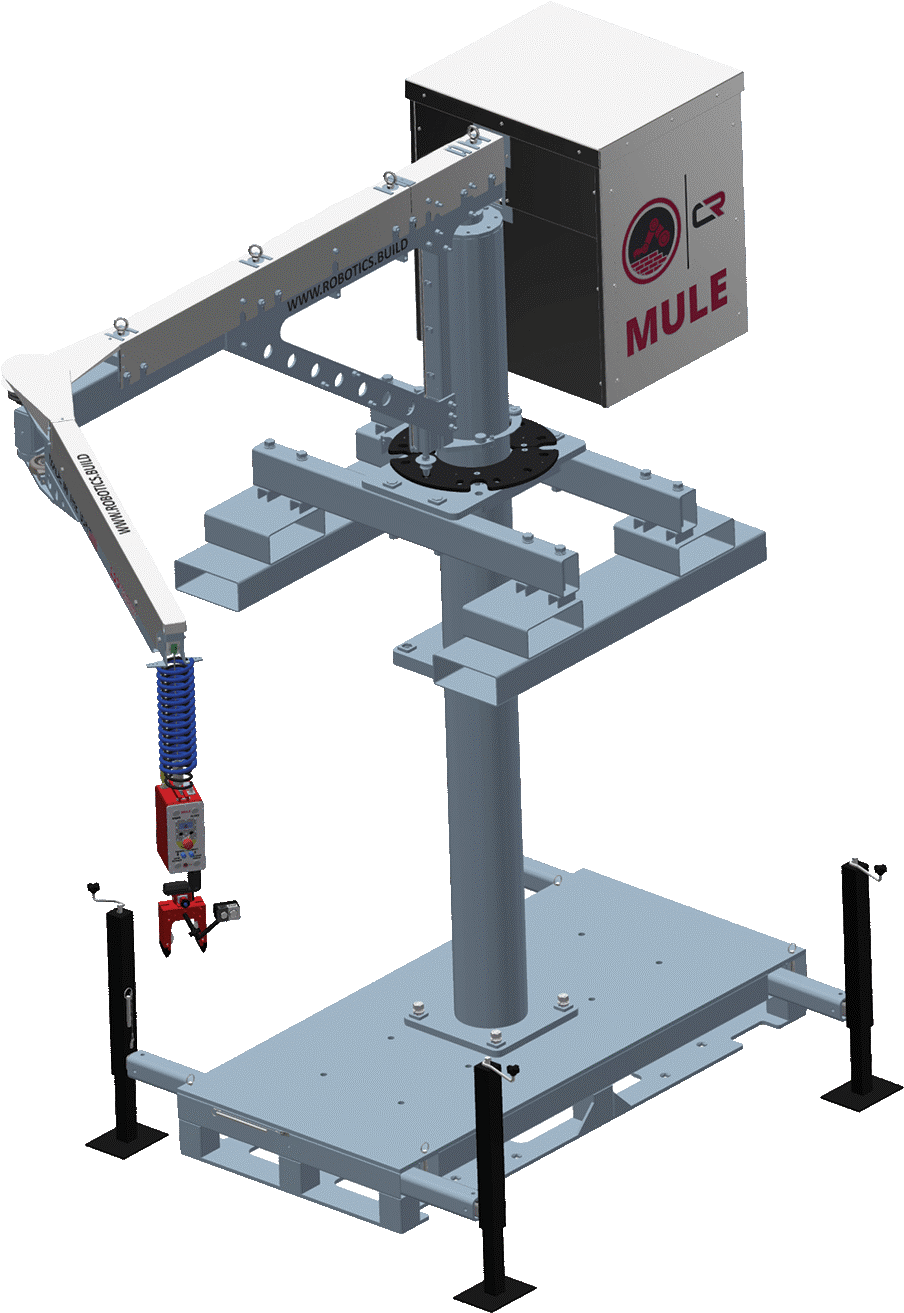 Assuaging the pains, CR (construction-robotics.com) has seen burgeoning use of SAM and MULE on job sites. MULE (Material Unit Lift Enhancer) is a lift-assist robot, capable of handling and placing material up to 135-lbs. The robot’s specially-designed gripper and versatile arm has become a lifting hit with contractors and workers alike.

“There’s still this forgotten space in the industry, in that so much of the construction and assembly of a building still requires individual pieces, whether it’s a 10-pound brick or a 50-pound block or a 100-pound panel to set in place,” Peters continues.  “And that’s where we think we can fundamentally change the game, while make it safer for workers and also leveling the playing field, where you don’t have to be the traditional big-strong construction guy to be on a job site.”

The robot has also helped bosses work with a more diverse hiring pool amid a time when crew rosters can be harder to fill.

“It also starts to level this playing field too. During these months of the coronavirus, we’ve been told by some contractors that they’re struggling to get people to come back to work. There have been labor shortages, and these contracts are on the clock. The MULEs are a big benefit.  Along with helping the workers they do have, it results in bringing on people who may not have traditionally worked construction, people who may not have, historically, been hired to work with big block projects.  Working with the MULE, those people of smaller stature can produce at the same rate as the mason next to them.  It opens up a lot of opportunity and flexibility.”  — Scott Peters

MULE not only provides fresh hiring flexibility but can also bring former workers back into the fold.

“We were recently on a job site in Indiana, and the foreman was showing us how they were using the MULEs. He pointed out a guy in the corner, a mason, whom they’d asked to come out of retirement because they couldn’t find union masons in the area; the guy had retired because he blew-out his shoulder and retired fairly young.  When they told him they had the MULE on the job site, he was willing to come back.  He came up to us and thanked us, told us that the MULE allowed him to work.  Hearing a story like that, it’s very impactful.”

As for SAM (Semi-Automated Mason), the brick-laying robot sports a robotic arm, conveyor belt, mortar mixer/pump and laser-guided systems for laying bricks in-a-row; an evolving machine with near-countless iterations of upgraded sensors and software, SAM can lay at an impressive rate of about 350 bricks-per-hour.

Workers are fast to warm to MULE, an initial skepticism for SAM isn’t uncommon among time-tested tradespeople. “It’s an industry that can be slow to accept change, where people are very proud of their work,” CR’s president says.  “And, change with people in the trades, it does take some time for them to get comfortable with it.”

Augmenting – not replacing – the worker, is at the nexus of CR’s mission.

“When we show up on a job site with SAM, a lot of these workers are really excited because they know this is the future and they love technology,” Peters says.  “And then there are people do have some skepticism, thinking they’re being replaced in their trade. It takes some time, some training, education to show that the robot is there to work with them, and not to replace them.”

Amid the days and concurrent restrictions of the novel coronavirus pandemic, CR’s tools have kept job sites churning.

“We had a recent project in Oregon with Skanska where they were shut down because of COVID-19 restrictions back in March or April,” Peters says.  “Because they were working with 12-inch block, the union rules in the market require a two-man lift; well, with a two-man lift, with that block, the workers are standing a foot apart.  So they couldn’t function on the job site because they weren’t socially-distanced.”

The alternate solution of CR tools saw the sight through the hurdles.

“They brought in the MULEs, and were able to properly distance and start the job.  Not only did the union masons love working with it, the contractor loved it and they saw a huge boost in productivity.  They ended up having nine MULEs on the project. From the vantage of social-distancing for workers, you don’t need to have two people working on top of each other. They can work within their own space with the MULE, and have high levels of productivity.”

Enthused and engaged by CR’s global growth, the most satisfying moment for Peters would seem to come when the work bell rings the day to a close.

“At the end of the day, the worker is going to physically feel better,” he concludes.  “They can go home and lift up their kid, help the family at the grocery without having to sit down to rest.  A lot of these guys may not think about that, every day, they’re trading their body, their health, for a paycheck.  When they get a chance to work with our equipment, it changes the quality of their life.”

To read the magazine version of this article, click here.