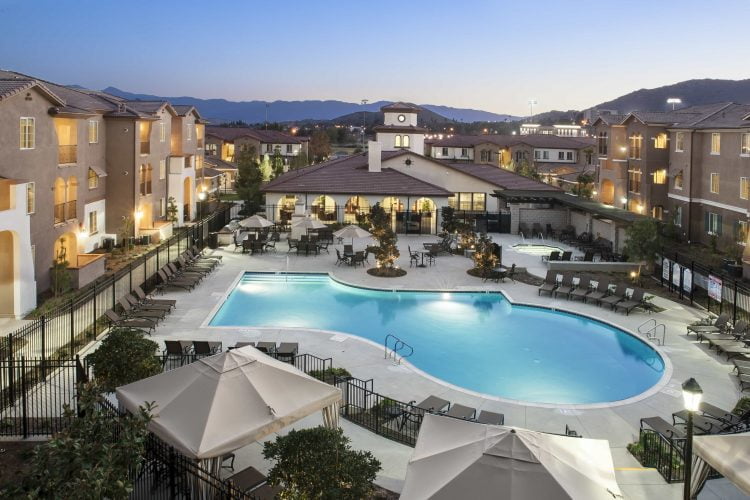 “When I think of what seniors are looking for, I think about my parents,” Griffin says. “Do you really want to send them someplace that feels like a nursing home? I knew we could do better than most of the experiences out there and fill a very specific niche.”

Though the Griffin Living team has decades of experience in all types of development, including master-planned communities, the approach wasn’t exactly what Griffin envisioned for this residential model. He wanted something different, something better. So he patterned it after a resort dynamic. The company’s developments integrate with the surrounding area with walkable access to retail, restaurants and services – medical and dental ­– plus indoor/outdoor amenities and activities, such as regular barbecues, Sunday brunch and restaurant dining.

Griffin’s senior-living philosophy is so intriguing that it captured a Gold Award from the National Association of Home Builders in its Best of 55+ Housing category. Its latest project, Varenita of Simi Valley, opens in Q4, right next to a thriving retail center with essential senior services.

“We scout our locations the same way the hotels do,” Griffin says. “We want to be where the action is. Varenita, for instance, is in the center of Simi Valley – or in the ‘urban core,’ if you will. You can see the lifestyles, restaurant, activities, the access to about anything a senior might need and is still minutes from the suburbs, which is ideal when our residents’ grown children and grandkids live that close.”

Griffin Living’s approach is using the demographic model of a 50-something daughter, who is often a key decision influencer for her parents. In theory, she has her own family at home still and she wants her aging parents nearby.

“No one wants to feel like they’re ‘warehousing’ their parents,” Griffin says. “They want a place for them to live, not warehousing them to die. Real estate is really about who is using it and what are they getting out of it.”

To meet the needs of this demographic, “we always have an eye on comfort, quality of life, and accessibility for the residents and their families,” he adds.

In the demographic model, the theoretical daughter, who presumably lives nearby, can drop by after work to have dinner with her parent or parents, bringing her spouse and kids.

Griffin integrates his senior-living properties with parklike atmospheres with gazebos, flowerbeds, and fountains that flow into the centers. “This way, both residents and visitors of the shopping center relish the environment,” he says. “Even if they aren’t shopping, residents can sit outside and be ‘in’ their surroundings – in touch with the activity and energy all around them.”

Griffin says that shopping centers are now “more of an experience – someplace you can walk, go to the eye doctor, the dentist or the hair salon – things you can’t do on Amazon,” he adds with a laugh. “It becomes like the old-fashioned town center where individuals interact.”

He pauses for a moment and says: “Perhaps the daughter drops the children off to see grandma while she runs to the grocery or drug store? The kids love exploring the walking paths, turtle pools and fountains. The residents love the energy of children around and the synergy creates more activity for everyone.”

The interior of the facilities equal the idyllic exterior atmosphere. The facilities have physical therapy and the gym equipment is computerized and calibrated for the needs of older people, providing just enough resistance on muscle groups to get the benefit without risking injury. Caregivers check on every resident every day, often a few times. “Our saying is, ‘We fail if someone is sitting there in a wheelchair,’” Griffin says.

New protocols for COVID-19 are taken extremely seriously, with temperature and symptom checks. If a caregiver has reason for concern, she will have a nurse check on a resident. Full-time, visiting staff and guests are also screened daily for COVID symptoms. Casual guests are not allowed.

“Fortunately, we were already putting top-of-the-line systems for air circulation in Simi Valley,” Griffin says, “We have a variable refrigerant that filters all the air to make it equivalent to an N95 mask. We recirculate the air four times an hour for every room. That was an extra $2 million, but we wanted ‘perfect’ heating and air. It increases the value of the building in the long run and it’s cheaper to run.”

The soap at hand-washing stations is surgical-center quality and touchless and-sanitizer stations are scattered through all the buildings. “There are things we can do to help each other,” Griffin says. “Trying to keep ahead of all the COVID-19 protocols is a challenge but the assisted-living industry as a whole has been up to the task. It’s the nursing homes that are facing such difficult times.”

Griffin’s immediate projects in California include Temecula, Laguna Niguel, San Juan Capistrano, and Rancho Mirage, which is next to two hotels, making it a destination if parents want to live in the desert. Investors and lenders are climbing over each other to get into business with Griffin “because the demand will only grow,” he says. “In the next 10 years, another million people will be entering the senior market.”

This article is in memory of PAUL E. GRIFFIN, JR., who passed away in April 2021.

“Paul E. Griffin, Jr. was a devoted husband, father, grandfather, and great grandfather who led his family with his example of faith, provided for his family through his real estate development business, demonstrated great charity for others, and was loved by many.

A native Californian, Paul was born on June 7, 1930 to Paul Sr. and Thelma. He is survived by his brothers, Dale and Steve, with whom he maintained a close relationship. Paul grew up riding his horse, Silver, around the citrus orchards in the San Fernando Valley. He spoke often of these memories in recent years. He played football at Van Nuys High School. There he met Gloria, the love of his life, and found lifelong friends in her brothers, John, Denis, and Gary.

He attended UCLA, where he graduated in 1953 as an engineering major. He married Gloria on her 18th birthday, December 16, 1950. They celebrated their 70th wedding anniversary this last December. Together they had eight children (Kathleen, Kristene, Paul, David, Gregory, Diane, John, and Matthew). They have 22 grandchildren and 12 grandchildren.

Paul began his career in 1954 after returning home from Korea, where he served as a Communications Officer in the U.S. Air Force. He was the fourth generation of the Griffin family to be involved in the home building industry in Southern California since 1903. He became President of Griffin Homes in 1966. Under his leadership, the company grew into one of the largest and most prestigious home building organizations in California because of superior architectural innovation, quality assurance, and customer service. In his career, Paul oversaw the building of over 30,000 homes.

Paul’s success was anchored by a firm commitment to his values, which could be seen at every level of the business, from the way he treated the thousands of people who worked on his projects, to the way he designed his developments for future residents, to the charitable ways he deployed the fruits of his business. Long before environmental issues became a public concern, Paul worked to develop new neighborhoods that conserved and complemented the area’s natural resources. More than anything, however, people mattered to Paul. Despite his great accomplishments, Paul had a graciousness that drove him to recognize others before himself. Those who worked with him held him in high regard, personally and professionally.

One of the ways Paul gave back was through committed service to his alma mater, UCLA. Paul was a member of the UCLA Board of Visitors and a major donor to the UCLA Medical Center. He and Gloria endowed a chair in Moral Philosophy at UCLA, made a major gift for the construction of the Newman Center, and were the primary benefactors in building the UCLA Athletic Hall of Fame. He was instrumental in getting the UCLA football program moved from the Colosseum to the Rose Bowl in Pasadena. He endowed a scholarship for rising real estate entrepreneurs at the UCLA Anderson School of Management and remained active with the Provost’s office there. He received the UCLA University Service Award in 1984, was UCLA Alumnus of the Year Award in 1988, and Chairman of the UCLA Foundation’s Board of Trustees from 1988 to 1990.

Paul retired from homebuilding in 1992. He and Gloria moved to Padaro Lane in 1997, where they enjoyed making new friends in the Santa Barbara area and continued their involvement with several religious and charitable organizations. These include Legatus, their local parishes (Our Lady of Mount Carmel and Our Lady of Sorrows), and the Archdiocese of Los Angeles. He was a Knight of Malta and a Knight of Saint Gregory, one of the highest honors the Catholic Church can bestow on a layman.

Paul is succeeded in his business by Paul E. Griffin III, CEO of Griffin Living, and Matthew Griffin, SVP of the Eastern States Division. His son, John Griffin, owns and operates a home building company in Northern California. Griffin Living builds and operates luxury senior living projects throughout America under its Varenita brand.
Paul loved traveling with Gloria, spending time with his children, his brothers Dale and Steve, his grandchildren, and his great grandchildren. He enjoyed hiking, golfing, fishing, sailing and scuba diving.

Paul had a love for God that guided him throughout his life. He spoke of wanting to be at home with his heavenly Father, setting an example of faith and trust for his whole family. He passed surrounded by his wife, children, and many of his grandchildren, who miss him, cherish his memory, and pray for him.”

What He Learned From His Grandmother About Guarding ‘The Family Gold’

What He Learned From His Grandmother About Guarding ‘The Family Gold’