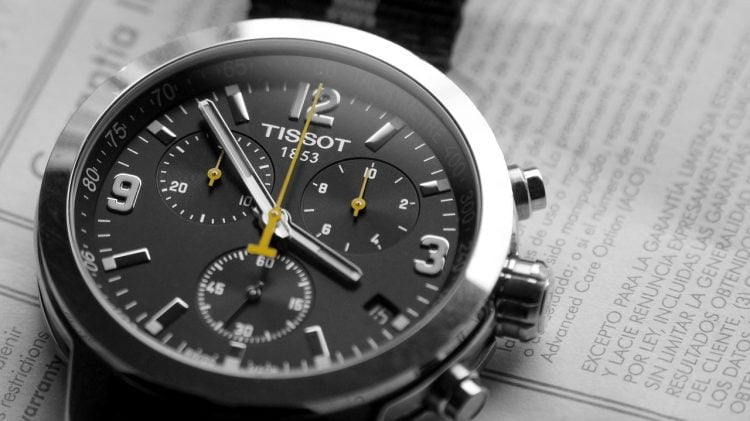 5 Most Affordable Tissot Watches Under $1,000

Many trends are in today, but only a few are iconic. It’s square case contain one of the world's first automatic chronographs.

The term iconic has been loosely used and gets thrown around without much weight. But what does iconic mean? Think of Jennifer Grey as Baby leaping towards Johnny, played by Patrick Swayze, and creating that scene of liberation and self-expression through dance, in the movie Dirty Dancing. Or the Queen singing Bohemian Rhapsody. Being iconic is about being different. It’s about going against the norm and leaving a mark that is immortalized.

In terms of wristwatches, there is one watch that remains so cemented in history. The mere mention of its name takes people back to days of extreme heat sports car racing, and one of the triumphs of the Swiss watch industry. We are talking about none other than the Tag Heuer Monaco.

From John Glen orbiting the earth with a Heuer 29514 to Timothy Dalton wearing a 1000 divers watch as 007, there is no shortage of historical events for Tag Heuer. But the most famous and noteworthy connection in groundbreaking history is the Monaco worn by Steve Mcqueen in the film, Le Mans. However, what most would not know about this perfect pairing of a famous actor and the first automatic chronograph in the square case is how it came to be the timepiece of choice worn in the movie.

History and the Race

Almost everyone who has an interest in watches knows about the quartz crisis and how Jack Heuer, along with other watch brands like Breitling, Hamilton, Zenith and others formed an underground mission to counter the Japanese quartz by creating the first automatic chronograph movement known as the caliber 11. But even as these companies joined forces to protect the swiss making industry, they were at the end of the day still competitors to one another in the market. They were also racing against each other to be the first to release their versions of the movement and have the bragging rights to be the brand that released the first automatic chronograph watch.

And as history would note, Heuer was the first to release their model and was even congratulated by Zenith’s president at the time who was looking forward to releasing their model to the Japanese market. However, before Jack released Heuer’s Caliber 11, he also had to find a way to make his timepiece distinct from the rest who will soon be releasing the same movement. The very chance presented itself when Ervin Piquerez offered Jack a square case design that came with a highly functional water-resistant system, known as the supercompressor function that tightens the watch’s case seal via water pressure. With this perfect combination, Jack was sure that the Monaco would be an instant hit. A chronograph with water resistance was unheard of, let alone a square-shaped case. But as a few would only know, Jack wasn’t able to sell one Monaco after the release like most successful watches we have today, it was not an immediate click to the masses. But as if conspired by destiny, a friend of Jack and a property master reached out to ask for potential timepieces for a movie about racing, starring McQueen. The instant pick for this opportunity was 1 Octavia model, 1 Carrera Model, which had scarce supply due to demand, and 6 Monacos to be sent and considered.

Among the choices, McQueen has his eye on the Monaco because of its unconventional case size. The wristwatch seemed the perfect timepiece for him to wear as he wore his striped suit with the Heuer logo and appeared on the race tracks. That moment in itself became iconic to all sports car racing and watchmakers and imprinted itself in the career of Mcqueen and Cinema history. The fast-paced 24 hours Le Man’s race, with one of the most famous stars of his time Mcqueen, and a watch that won the race in its field, the Monaco Caliber 11. Everything was aligned.

Monaco And Its Design

So what’s in a Monaco design that captivated the world of sports car racing? Is it the square case that was ahead of its time and provided racers optimum legibility? Or the interesting curvature of the sapphire crystal? Maybe it’s how the geometric forms in the dial play in tandem and how the color scheme perfectly gives the dash and splash of sports car racing? The answer is quite clear by now, it’s all these elements together that make the watch something outside of the ordinary. Both its mechanical and aesthetic features contribute to it being an avant-garde timepiece. Making it an icon in its own right.

Presently the Monaco had more variations. At the 50th anniversary of this timepiece, different dials were released to pay homage to different timelines. They released a dark green dial with mustard yellow and burnt orange tones, which were typical colors of 1969. For the 1980’s they made a deep red strap and dial. The ’90s was celebrated through a grey dial with red and blue tones and for the 2000s a black and white dial tone.

To get a closer at this timepiece, we like to see how the classic dial and design have developed through the years. The best reiteration of Monaco is the Tag Heuer Monaco Caliber 02. Modern Monaco has retained its automatic racing design with its striking blue sunburst dial, its central and subdial hands painted red, and applied silver-tone indexes. The watch has a 39- millimeter case size, thickness of 15- millimeters and a lug to lug of 47-millimeter and paired with an excellent alligator strap signed with a dependent buckle. The case has alternative brushing and polishing through faceted surfaces. At 3 o’clock, there is a non- screw sign crown and rectangular pushers. The movement inside it is the caliber 02, which is visible through the case back. It has a vertical clutch and chronograph caliber featuring a solid and on-brand deco, sporty dimensions, and geneva waves. Across the bridges a visible column wheel executed in bright vibrant red and black coated rotor that rotates unidirectionally through very freely with enough mass. It beats 28,000 vibrations per hour /4hz, an 80-hour power reserve, and 100 meters water resistance. Though in all honesty the square-shaped case is not for everyone and gets a little getting used to, many revere this timepiece design as the best example of avant-garde fashion in watches and the first automatic chronograph.

Takeaway: If you like to see more Monaco design variations visit WatchShopping and shop for your potential out-of-the-ordinary Tag Heuer timepieces. WatchShopping is a dedicated licensed Luxury watch dealer committed to providing quality and authentic watches and swift, easy customer transactions. If you feel like going against the tide of circular case-shaped watches, be sure to check out Monaco models at WatchShopping.

Why Shopping Online is the Best Option for Most Buyers
Tags: 1969anniversarybestcarcasecloserDancefilmFirstgreenITJohnleavingLittleluxurymakingOrangepowersilvertagwater
ADVERTISEMENT

Why Shopping Online is the Best Option for Most Buyers