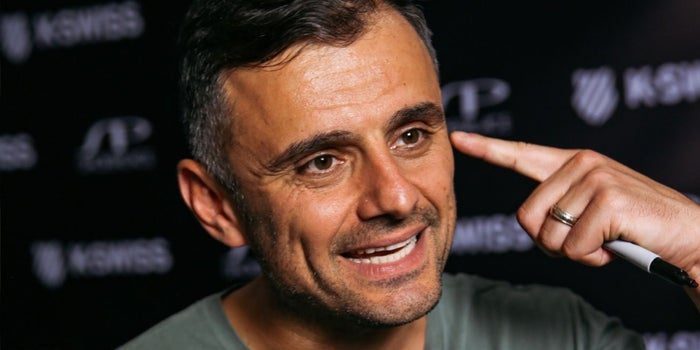 No matter what you think about his in-your-face YouTube videos or his ‘out there’ advice, at the core he knows what he’s doing.

Why Working for Free Gives You Authority | Surprising a Fan From Twitterhttps://t.co/nCicKGj6np pic.twitter.com/4VqcAWffyN

Gary Vaynerchuk sparks controversy. The 45-year old entrepreneur, known for his media empire, digital marketing presence, and brash YouTube videos, has millions of fans. But there are many others who label him a snake-oil salesman, an internet celebrity getting rich by selling dreams full of hot air, and by being loud and abrasive.

But there’s one thing nobody can deny: his net worth. He’s sitting at around the $200 million mark. So no matter what you think about his in-your-face YouTube videos or his ‘out there’ advice, at the core he knows what he’s doing. After all, he’s been the one to predict Twitter going IPO, Facebook buying Instagram, the popularity of Vine and TikTok, the rise of popularity of online gambling, and the list goes on.

Some will equate his ways to gambling his luck, but he himself has said that he lives by the “no risk, no gain” mantra, and by that he means thought out, rather than impulsive risk-taking. The truth is that his advice works, as long as you actually put it into practice.

“Get Dirt Underneath Your Fingernails”

That’s a direct quote from GaryVee himself. It’s from an interview that he did on Shopify, and it has two layers. On the surface, he’s telling entrepreneurs to try selling an item on the e-commerce platform, even if you don’t really have anything to sell.

The point is no matter what your niche is, you’ll probably end up selling online. It’s the nature of the beast in 2020 (especially in the Covid-era).

Vaynerchuk advises you to spend a week or two learning the dynamics of running ads on Facebook, Instagram, and other platforms. Learn how a consumer lands on a sales page, and what converts (Google Analytics is your friend). You’ll then be able to rinse and repeat.

But the real bit of advice comes in the quote nestled in the midst of his Shopify advice: get dirt underneath your fingernails. Don’t stick to the theory, but get out in the field. Figure out what works by trying it, not simply reading what other people tell you.

Vaynerchuk is one of the greatest proponents of offering stuff for free. And not just to save money, but to get more business through the door.

The reason is this: you’re building value. It’s the idea that if you give stuff to others without asking anything in return, you’ll build a reputation in the industry. Trust is worth more than any monetary figure. On a deeper psychological level, people are often almost guilted into doing something in return.

Vaynerchuk’s strategy reminds me of something I read on a casino blog called VegasSlotsOnline, where they’ve taken to Vaynerchuk’s “Jab, Jab, Right Hook” philosophy with regards to the offers they have. Bonuses (jab!) and free spins for slots (jab!) that many of the casinos pride themselves on, help land customers (right hook!). These games can be played for free, while offering real prizes but the opportunities for players to make a profit by relying solely on this mechanism are usually very low. This is how so many people end up depositing real cash at some point.

This is pretty much exactly how Vaynerchuk’s strategy works – giving away services for free to get more money in return. How? It’s all about being strategic with the free value you give away, not doing it mindlessly. There should be a clear plan to get more customers, not simply providing a free-for-all. It should be a win-win situation, where the consumer gets massive value for nada, and you eventually get a paying customer in return.

And Remember: Just Do It

I’m going to sign off with the risk of getting slapped with a lawsuit from Nike: just do it. Here’s a bet I’m willing to make: this is not the first ‘business tips’ article you’ve read online. But you’ve probably only implemented a tiny fraction of what you’ve consumed.

The message? Get out there and try things out. The reason most people fail is that they don’t follow through.

How to Make Launching an Online Business a Breeze