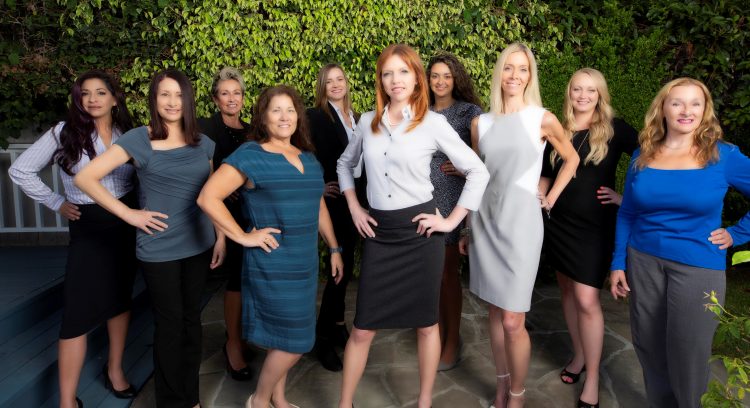 The company’s gender balance sends a message both in and outside its walls: “It says that our company is looking for the best talent in the workforce.”

AseptiScope isn’t just changing the medical device industry with its new stethoscope technology. Behind the product launch of its DiskCover Dispenser System™, the company is also changing the heartbeat of corporate gender culture.

Founded in 2016, AseptiScope’s leadership includes a distinct female presence through all levels of management. Across its full staff, more than half of the company’s roster is female.

“It’s definitely different from my experience,” says Kelly Powers, Founder and COO of AseptiScope.  “Particularly from my early years as a professional, where most of the companies I worked at – in the oil and gas industries – were predominantly male.  These companies were terrific to work with, but there was truly a need for more diversity; particularly a need to see more women in leadership roles.”

With two decades in corporate culture, Powers, who developed a Women’s Initiative Network with one previous employer, says the company’s gender balance sends a message both in, and outside AseptiScope’s walls.

“It says that our company is looking for the best talent in the workforce,” adds the COO. “At AseptiScope, what we all recognize is that blending gender in leadership roles is providing more diversity in perspective and planning.  And we celebrate that.”

Purviews of both past and prologue are shared across the company’s leadership ranks. Across a corporate career dating back to the mid-90s’, AseptiScope’s CFO, Kathleen Winer, has seen gender equality find slow, but steady modernity.

“I can still remember back to the days when women were principally unwelcome in executive positions of any kind,” she says.  “And then we went through the era of ‘malicious compliance,’ where they said they wanted women in these positions, but did everything they could think of to keep us from getting there.”

Innovative and forward-thinking companies such as AseptiScope (aseptiscope.com) are leading examples of needed change. “More recently, we’ve seen more women in HR or finance roles, but still, you never saw women in positions of authority in, say, the areas of engineering or operations,” Winer says.  “But that’s now starting to change, and, from my perspective, it’s very satisfying to see this. It’s vastly different today than when I came up, and I feel like the momentum will keep this shifting in the right way.”

AseptiScope’s female leaders aren’t simply eager to champion the actuality of corporate gender balance – they’re fast to evidence the vast importance of why diversity is crucial to success.

“There’s no question that men and women think differently, see the world differently,” Powers says.  “Enhancing diversity is a great way to expand the way a company thinks, and to offer more possibilities than an organization would have with a more dated approach.”

Gender equality in a company is recognized by employees across the ranks.

“When you’re in a work environment which is top-heavy with male executives, that echoes down to the lower ranks, to where everybody in the company starts to view the women differently,” Winer says. “But by demonstrating that you have a diverse, dynamic, respectful and interactive team – that takes gender standard out of the equation, for everybody, from the top on down.”

In the recent past, uniform (i.e., male-dominated) teams atop the corporate totem commonly led to muffled voices across the work chain.

“For any team – the more diversity you have, the more solutions and approaches you have to problem-solving. And one of the things I really like, is that the amount of diversity we have really encourages everybody to speak up more; looking back at the early stages of my own career, everybody was pegged in roles, which forced people to stay in their own perspective.  Our approach allows people to be more honest and forthcoming with their opinions.  A lot of this is making sure people feel comfortable having their voice heard, and that’s not easy to do if people are intimidated by the work environment.” — AseptiScope CFO Kathleen Winer

In the centric world of medical devices, such gender balance moves from the board room to the examination room.

“There’s no question that women bring something different than men to the medical device industry,” Powers says.  “The qualitative nature of information is, of course, gender neutral and important in the strategic process.  But half of our total audience and users for the stethoscopes are female; and men can only imagine how a medical visit goes for a woman.”

In the late summer of 2020, AseptiScope’s debut of its flagship DiskCover Dispenser System aims to revolutionize what is recognized as the most utilized medical tool in the world.  Used over 5.5 billion times a year in the U.S. alone, the age-old stethoscope has long been ready for a sanitized make over; the wall-mounted DiskCover Dispenser System affixes a touch-free, aseptic disk to the tool for each new usage, doing so without any loss or hinder in acoustics.

“As a trained E.M.T., I love that we are bringing rapid, state-of-the-art technology to reduce risk of infection in the midst of a true pandemic,” says Soukaina Mohareb, Head of Customer Experience for AseptiScope.  “This is my first medical device launch and it’s amazing to see how care givers react to a true solution that takes only a second to implement as they care for patients.”

“Half of our end-users are female nurses and doctors, and, looking further, half of their patients are women,” Powers says.  “And we work with a lot of nurses and nurse’s focus groups; and as many of these nurses are women, they see our company’s gender diversity, they’ve commented to us on it, they appreciate it and they recognize our female leadership roles.”

Adds Winer: “With this diversity, it really opens the door for us to invite women who are epidemiologists or women who are experts in this industry or women who are working as administrators in hospitals – it presents them a variety, allowing them to interact with us in a different way.”

“We, as women, know intimately how the process goes; there are some medical appointments, which only women would know and understand. We can understand, sympathize and empathize with their concerns, knowing how doctors and nurses interact with patients in female-specific appointments.  With our new product, there is a lot of interaction with women-specific end-users.” 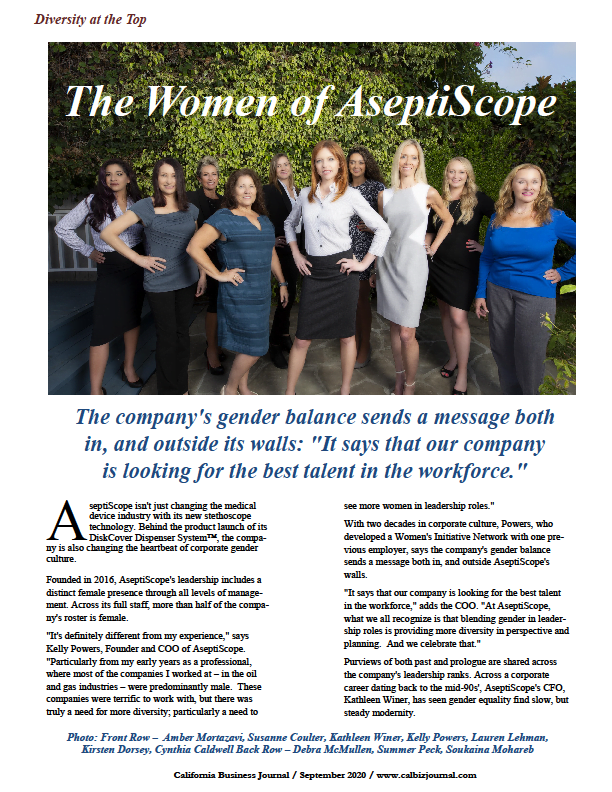 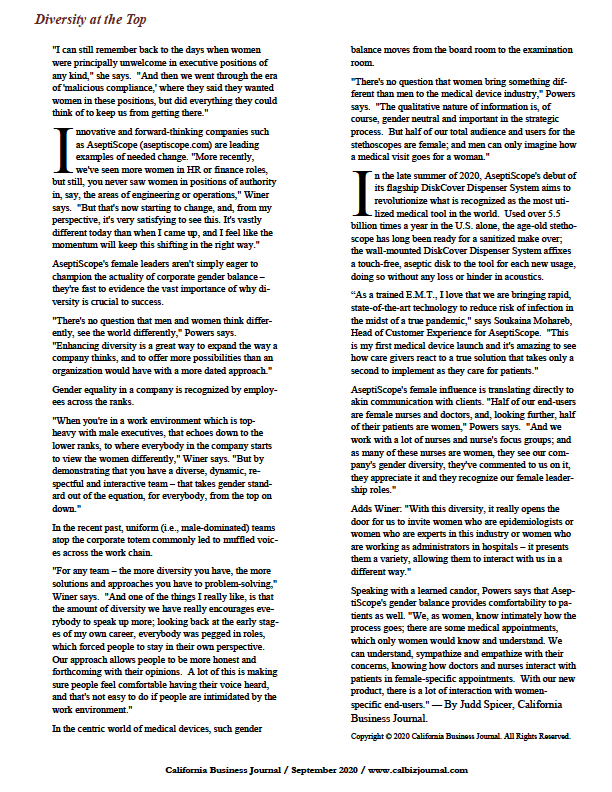