The digital rush paused the out-of-home visual billboard space – initially … but now advertisers are rediscovering the value of its influence.

Look up, look out and look around.

Preceded by fascinating careers the world of interior design to the stars of Hollywood, Swing’s 1998 unveiling of his firm came one year after he built a newsstand on West Hollywood’s famed Sunset Strip. He was doing iconic ads for the newsstand, the marquee and the awning with such clients as Coca Cola, The New York Times and The Hollywood Reporter.

The stand’s premier perch and bustling nighttime club business served in concert to Swing’s celeb design and music connections, paving a path for his company’s debut. In time, the founder compacted his swing. “Throughout the years, it became tailored toward, ‘Let’s be great at one thing,'” he says.

Such significance put the onus and focus on dazzling outdoor billboards. Today, with a list of 80 clients, and one of the largest boutique agency in annual revenue, the agency works with a host of top-line products, including Armani, Guess, Max Mara, John Varvatos, Hudson Jeans, Dior, Wynn, Sam Edelman, Joe’s Jeans and Diesel.

“Compared to TV and print media, you look at the charts measuring impact and influence, they go up-and-down,” Swing says. “Out-of-home has never taken a dip in over 100 years.”

With Swing’s head on a swivel, client ad dollars further devoted to electronic mediums found the CEO closely assessing the marketing landscape in recent years. Acknowledging that the digital rush gave the out-of-home business some pause, Swing says the vast majority of clients have fast rediscovered the value of out-of-home’s visual awareness influence.

“In the last two years, it’s crazy; everybody is coming back,” he says. “They decided to budget differently and we’re seeing clients ask for much more out-of-home. Which client doesn’t want to couple print and digital with the sight of a big billboard?  Everything complements each other.”

Part of the pitch, he says, is brand consistency and public perception. “It’s hard to argue with the clients when they’re right, and, look, it’s important for them to have a digital presence; I’m a fan of these other mediums,” he says.  “But, especially with brands that have been on billboards for a long, long time – they become a staple on a corner.  And if those get taken down, then people wonder what happened to the brand.”

A landmark presence simply can’t be found online. “Take the Gucci billboard on Sunset Strip [now Netflix]. For two decades, people would say, ‘Make a left at the Gucci ‘board.’  It’s a landmark,” Swing says. “And that’s our strength. That’s the discussion we have with clients – don’t do a flash-in-the-pan billboard for two months. When they’re ready to do a billboard campaign for a length of time, let’s do it. Whether it’s a campaign to yield high ROI or a statement one, we want them to be a landmark and for people to get excited about the new creative changes throughout the duration of the campaign.” 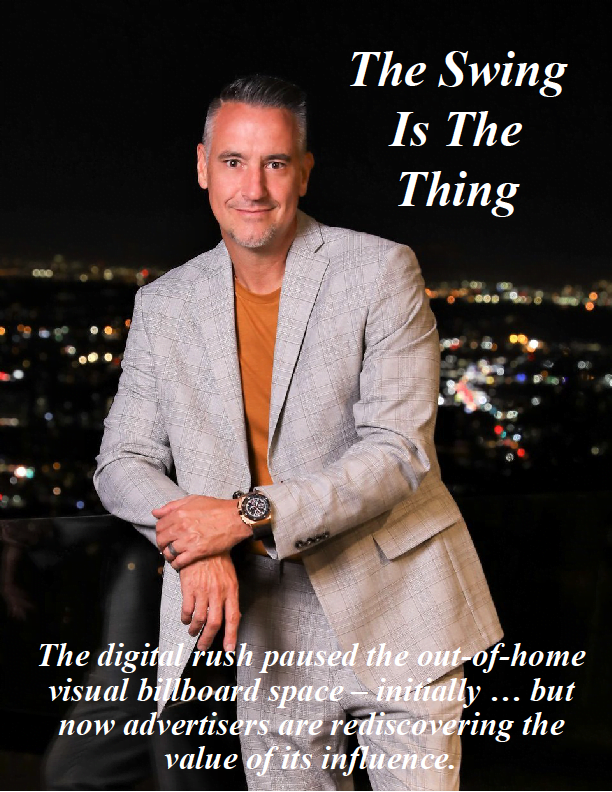 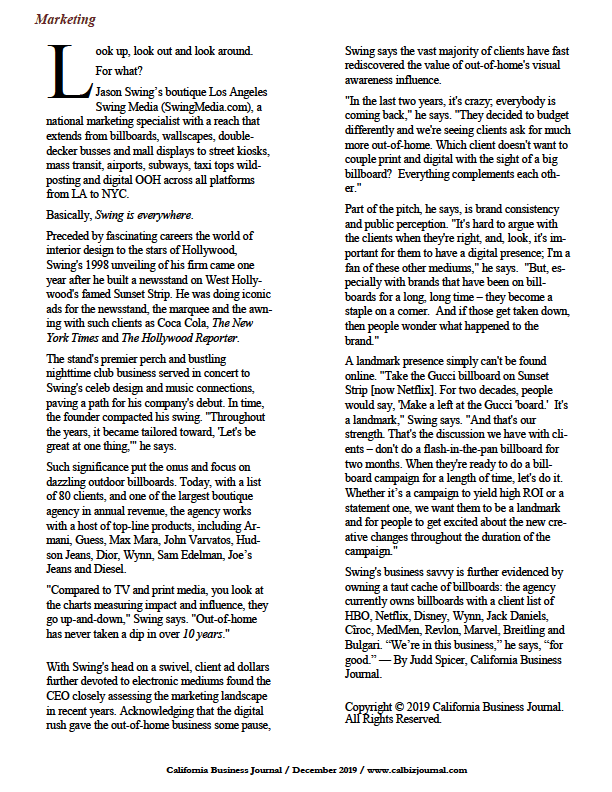