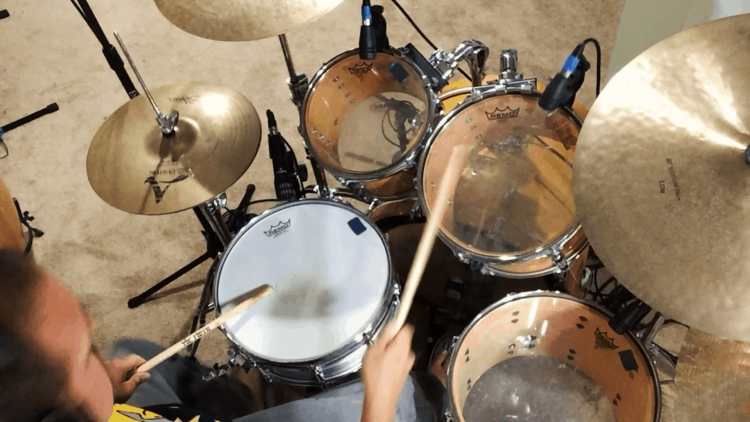 As anyone who has pursued a career in the arts can tell you, part of your education – even a highly prestigious one – comes with cautionary advice from relatives, “Make sure you have a fallback plan.”

David Libman came into his law practice after a musical career, when fatherhood compelled him to take a more conventional approach. For more than 20 years, he’s found a solid cadence of practicing law while continuing to do periodic gigs.

He grew up in a musical family. His father was a classical pianist who toured Europe before his parents married. When Libman was a child, his parents owned music stores in Chicago and he was surrounded by instruments including pianos and guitars. He started piano very young but wasn’t very interested and then began with the drums at age 6. He’s played ever since.

His talent took him to study at Julliard and after, he worked as a professional musician for several years playing in renowned locations such as Carnegie Hall, Lincoln Center and Universal Amphitheater.

“I wasn’t really a classical musician,” he told California Business Journal. “I was mainly a drum set player doing a lot of jazz and rock and other stuff in Southern California. I did some studio work but I mostly did live performances. I played at the Baked Potato a lot – it’s a famous L.A. jazz club. I did some minimal touring and worked for Suzanne Somers from ‘Three’s Company.’ She used to do live shows at casinos and other venues. I was in her band. She also did a daytime TV talk show and I played for her there too.”

Libman married another professional drummer and after he and his wife had their first son, they realized being touring musicians and raising kids was not an easy mix.

“If you’re famous, being a professional drummer can be a great career but if you’re like we were – working in the trenches – it’s not the best job to have with a kid,” he says. “So, we decided one of us needed to go back to school. My uncle and grandfather in Illinois were both attorneys and my wife had some attorneys in the family so we decided I should go to law school.”

He and his wife continued to play gigs on weekends while he was attending Chapman University School of Law in Orange, California. While he was still in school, they had another son. Libman graduated in 2001 and he’s been in practice ever since, specializing in civil litigation, real estate, business, tax, contracts and some estate planning, to name a few areas of his expertise.

“I practiced for the first seven to eight years out of law school in firms, but I went back to UCLA and I earned a Master’s in law. That was in business and tax,” he says. “After that, I worked at a San Francisco boutique tax firm then came back to Orange County to work for a firm here for four or five years and then I realized I wanted to work for myself. So, I bit the bullet and opened my own practice in in Santa Ana.”

He’s been a solo act ever since. In June, it will be eight years and he wouldn’t have it any other way. His practice is 60 to 70 percent litigation, depending on the month.

“I don’t have a cookie-cutter practice,” he says. “If I try to imagine how my musical background has informed my style of practicing law, it goes back to being a jazz musician. You need to know how to improvise and go with the flow and change direction quickly so you can adapt to what’s happening. When I was a ‘younger lawyer,’ there wasn’t a lot of opportunity to do that but now there is. Also, just listening is the best skill you can have, which I refined as a musician. When working with my clients, I try to do a lot of listening so I really understand what it is they want and need. My clients often say I’m different from other lawyers they’ve dealt with. I’d like to think it’s because I truly listen to them.”

Libman specializes in what he calls the “gray zones.” The areas where people are at an impasse. Everyone has a different side to the story and those sides are in conflict.

“The thing that people don’t realize with law is that, if there’s an easy answer on a legal issue, most people don’t even call a lawyer because they can find a rock-solid answer on the Internet or through research. So, by the time you come to a lawyer – especially a trial lawyer – there are a lot of gray zones and people are uncomfortable there but that’s when you most need the help.” — Attorney David Libman

Once he’s worked with a client in one capacity, they tend to call him in the future as needs arise. From business formation to dissolution, purchase agreement issues, commercial lease agreements, disputes over who is the proper owner of a business or property, disputes with trust beneficiaries that are going to inherit property and what to do with it.

Another way Lipman channeled his creativity was combining his fascination of common-sense advice about things people say and often believe are true, but really aren’t. This took the form of a book called, “100 Reality Checks,” published in 2018.

According to the Amazon description, “’100 Reality Checks’ includes a set of alternatives to many popular assumptions and sayings, including maxims, axioms, proverbs, quotes, prevailing theories and the like. The point of its reality checks is that you need not pretend anything said or assumed is true just because it sounds or feels good. If you develop the habit of funding your own reality checks, your mental wealth will flourish.”

“People continually say things like, ‘Do what you love and the money will follow,’” he says. “Well, that’s not really true. We’d like to think it’s true, but it’s not. Maybe if we said, ‘Do what you’re good at,’ it would be more accurate. The goal is to get the reader in touch with their ‘internal compass,’ which helps them discern what is true and what isn’t. Once we’re in the habit of questioning the truth of those things we’re invested in, life can become simpler.”

The book is constructed with a horizontal layout to look like an actual checkbook with each lesson in the form of a “check” and covers areas from careers and business to love and relationships, parenting and children. It’s designed for the reader to open it up to any page and find a nugget of wisdom. But because it was published about a year before COVID-19 hit, Lipman says he may need to revisit it.

“The pandemic turned everything upside-down,” he concludes. “Now, maybe what was not true then, has become true. I might have to give it another look.”