Richard and Steve Oshins are the only father and son team ever inducted into the Estate Planning Hall of Fame, the highest honor in the industry.

But the Estate-Planning Hall of Fame?

Who would have thought?

Well, as surprising as that is, there is an Estate-Planning Hall of Fame. There are approximately 100 members – advisors, estate-planning attorneys, CPAs, law professors, financial advisors and trust officers who’ve had the biggest impact in the history of the industry.

Yet there is only one father and son team in the Hall: Richard and Steve Oshins.

Another law Steve authored allows estate planners to reduce a wealthy client’s taxable estate using special types of limited liability companies or limited partnerships by discounting the values more than any other state allows. To date, no other state has passed legislation to compete with the laws Steve authored.

“I came up with the concept about 20 years ago, but only after I gave it the branding and really started writing and speaking about it did it pick up steam,” he says. “Now almost all the top asset-protection planners use it.”

Another element Oshins is known for are the charts that rank different states for their Dynasty Trust laws, their Domestic Asset Protection Trust laws and Trust Decanting laws. He created a fourth chart with all states’ statutes to explain what it takes for a particular state to tax a trust. He updates each chart once a year and rotates them on a quarterly basis.

“The charts are used throughout the industry with the state income tax chart the most prevalent,” he says. “Before I created the state-ranking charts, Delaware was dominating the trust industry. But I knew Nevada and South Dakota were the top two trust states. I thought if I put the material differences on one page, it would change the industry. Sure enough, Nevada has since taken a lot of the multi-billion dollar ultra-competitive trust market from Delaware.”

Oshins is now known by nearly every estate planner in the U.S. – and his firm is considered one of the most highly-regarded in the industry.

On a monthly basis, Oshins lectures at large national estate-planning conferences and shares his industry knowledge through national webinars, teleseminars, interviews and published articles. “Getting in front of as many people as possible to bring them estate-planning and creditor-protection ideas and techniques can’t be replicated any other way,” he says.

On this day, the day of the interview for this article, Oshins had just completed a speaking engagement in Newport Beach, Calif.

“This type of marketing has been a big key to the growth of my law firm,” he says.

He also credits the other employees at Oshins & Associates for much of the growth and success of the firm. “Attorneys Heidi Freeman, Kristen Simmons, Jeremy Spackman and Courtney McCandless from our office are all as good as any attorneys in the industry and our non-attorney staff is spectacular as well,” Oshins adds.

The acknowledgment that blew Oshins away was Wealth Advisor named him Top Estate Planning Attorney of 2018. In the article announcing the award, Wealth Advisor said: “As far as we’re concerned, he’s the Top Estate Planning Attorney in the country right now. He’s got the profile, the expertise and the drive to lead the industry into what can sometimes look like an unsettled regulatory future.”

Not surprisingly, Oshins says his unparalleled success begins and ends with his father. “My father trained me when I was 24 and just out of law school,” Oshins says. “He showed me what it takes to be at the top of this industry and how to think outside the box. He let me run the firm when I was in my mid-20s, so I was able to grow it to where it is today.

“Having the last name ‘Oshins’ helped me get recognized when I was just starting out,” he continues. “People were familiar with the name because of my father’s accomplishments. The recognition definitely helped speed my success.” 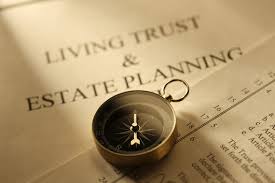 Though Oshins’ practice, the Law Offices of Oshins & Associates, is based in Nevada, 80% of the firm’s clients are from outside the state. He has more than 500 clients with a net worth of $100 million or more and upwards of 20 billionaire clients, “so a lot of our work is in advanced estate-tax planning,” he says.

His clients from other states set up Nevada trusts in order to maximize the tax and asset-protection advantages available in the state.

Asset-protection planning must be done well before any problem occurs. “Otherwise it doesn’t work,” Oshins says. “This is important because there are so many people wanting to sue the wealthy as a short-cut to gaining their own wealth. As the estate tax exemption has increased, we’ve shifted more of our practice to asset protection planning and state income tax planning.”

Yet trusts still dominate his practice. “A lot of clients from other states set up Nevada trusts in order to take advantage of the tax advantages and asset protection advantages that can be obtained,” he says.

Oshins has authored or helped write many of the most important trust and asset protection laws in Nevada. This has helped make Nevada one of the leading states for different types of trusts and business entities. To this date, arguably no other state has passed laws to compete with the laws that Oshins wrote, a resounding statement and one of the primary reasons he is in the Estate-Planning Hall of Fame. 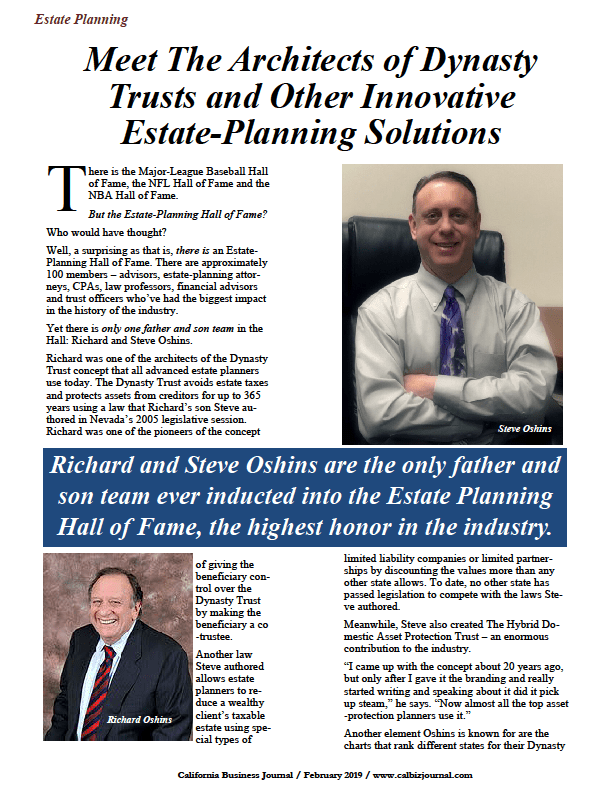 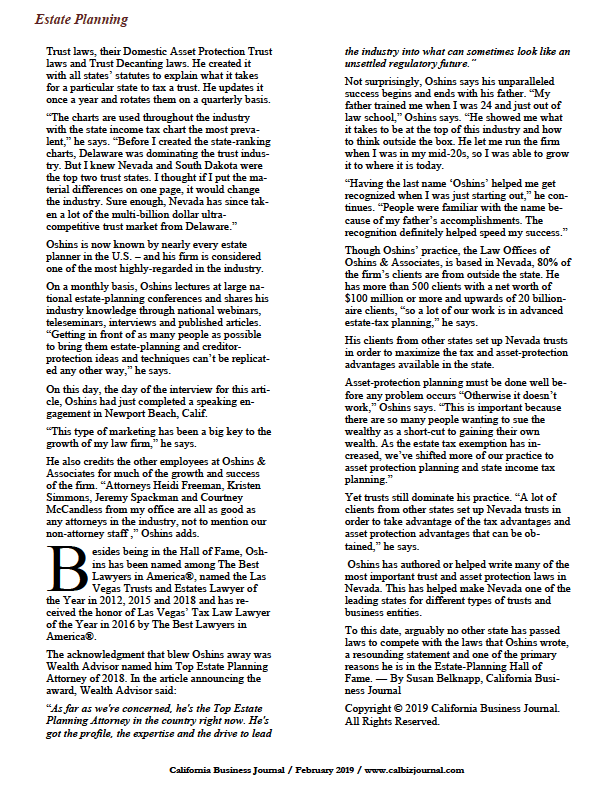 Living Will vs. DNR: What’s the Difference?