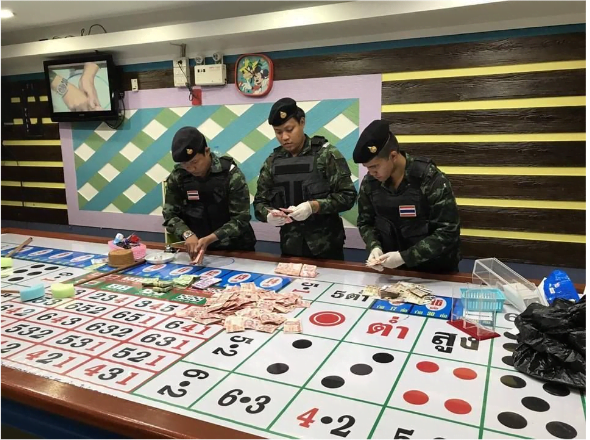 Despite official efforts to crack down on the industry, instances of unlawful gambling are more common than ever in Thailand.

The Thai police recently found themselves with their trousers down, so to speak, which is both hilarious and telling. The news report describes how a robbery occurred in an illegal casino that was only 650 meters from a police station. The thief, who was known to have connections to the Thai mob, was able to flee with the equivalent of about $8,000 in cash. Perhaps the most significant aspect of the tale is the police’s assertion that they were not even aware the establishment existed.

In Thailand, illegal gambling is so widespread that law enforcement is unable to keep up with the offenders. On top of all the money the government could potentially make from tax revenue by legalizing gambling and providing the public with safe spaces to engage in their favorite past-time, the government is spending money on specialized task forces and committees to assist in putting an end to the illegal rackets as they arise.

Unfortunately, the scenario is not brand-new. Since the 1930s, gambling of any type has been frowned upon in Thailand. In contrast to its neighbors and other Asian nations like Singapore, which have legalized gambling and developed sizable casino resorts to boost the local economy, Thailand has remained steadfast to its 1935 Gambling Act, which prohibits all forms of cash wagering aside from the national lottery and horse racing at racetracks that have received government approval.

Getting A Foot in The Door

Thaicasinocenter has predicted that after the COVID pandemic is over, new gaming regulations will be implemented. Thaicasinocenter, one of the few Thai affiliate sites available, serves as a to-go Casino News website for many Thai gamblers. Instead of any casinos in Thailand, they concentrate on offshore gaming sites that have obtained gambling licenses in countries like Malta, Gibraltar, or the United Kingdom. This is another example of how foreign businesses benefit from this sector of the Thai economy more so than the Thai government.

However, the legal environment in Thailand appears to have been relaxing recently. Pichet Chuamuangphan is the second vice chairman of a parliamentary committee pushing to amend the 1935 Gambling Act. He has lately made it clear that increasing tourism from outside of the country is a top priority. This will enable the government to collect large taxes for economic security and reduce the outflow of money from Thai gamblers.

The committee proposes that the government issued a decree allowing the development of recreational centers with lawfully functioning casinos in key places around the country. Five casino resorts appear to be feasible at this time. Potential locations included the heart of Bangkok, the north of Chiang Rai or Chiang Mai, the east of Pattaya City, the south of Phuket, Phang-nga, or Krabi, the east of Udon Thani or Eastern Khon Kaen, and the north of Ubon Ratchathani.

If the proposal is successful, it might bring billions of dollars to Thailand from tourists, gamblers, and other visitors who would otherwise go elsewhere.

The Neighbors Are Already in The Game

As a result of Macau’s zero-Covid policy, several Asian nations are vying for the lucrative Chinese tourist market. With only two integrated resorts—the business-focused Marina Bay Sands and the tourist-focused Resorts World Sentosa—Singapore is still often held up as a model for the industry.

Countries including Cambodia, Vietnam, the Philippines, South Korea, and Malaysia all have integrated resorts providing a wide variety of amenities, including lodging, gambling, meeting spaces, restaurants, shows, boutiques, and even attractions.

In addition to the substantial increase in tax revenue that Thailand would see if it permitted its own citizens to participate in legal gambling, this measure would also prevent Thai citizens from squandering their money in illegal casinos that are unsafe, lack proper licensing, and operated by people of questionable moral standing. Thailand’s tourism industry has been on a downward trend in recent years, and offering these services to foreign tourists could also help turn that around.

At this time, Thai individuals are required to either fly to a country that hosts legal gambling, such as the neighboring nation of Cambodia, or play at offshore internet casinos, which do not necessarily provide a customized gaming experience, neither of which brings any money into Thailand. These are variables that the Thai government would have to be wilfully neglecting in order to not realize the potential to not just keep its populace safer and happier but also to grow its economy.

Playing Online Slots in Asian Casinos: Is it Safe or Not?

The Future of Online Gambling

The Future of Online Gambling

Playing Online Slots in Asian Casinos: Is it Safe or Not?