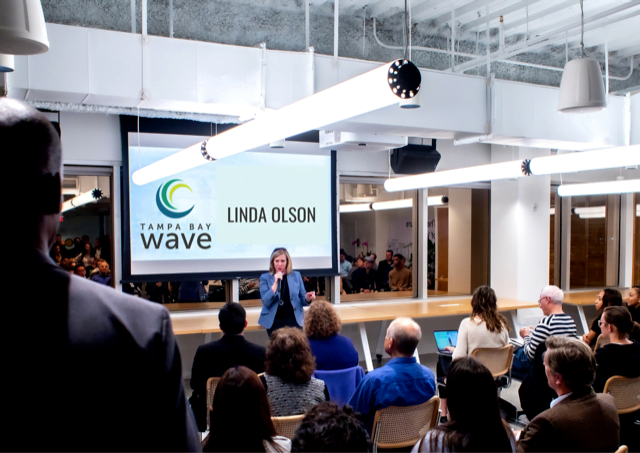 For both sides of the gender line, the timing is ripe for entrepreneurial intrepidity.

A growing bastion for fueling minority-led opportunities in the still too-uniform tech world, the Tampa Bay Wave is cresting for further equality.

And the nation is watching its model closely.

Debuted in 2008, the original mission of the organization (tampabaywave.org) was to serve as a helping nexus for regional tech companies to achieve their company visions. In the years’ since its debut, the budding nonprofit has both expanded its reach and empowered entrepreneurs far beyond the founding framework.

Fueled by a new grant and initial two-year commitment from JPMorgan Chase, the Wave has launched its TechWomen Rising Accelerator program. Working in concert and splitting the funds with fellow nonprofit, Embarc Collective, the dual tech startup accelerators are teaming for an initiative to turn inequality into opportunity.

Since 2013, the Wave has supported more than 300 startups and raised over $300 million in funding. Along the way, it helped to create 2,000+ jobs and, provincially, seen a dozen startups relocate to Tampa Bay.

Criteria for TechWomen Rising recognizes companies owned, operated or controlled by a female majority, though men may also be a part of an applying firm.

“We want these women to be true founders of these companies, and not just a member of the management team.” Linda Olson, president and CEO of Tampa Bay Wave.

After an application deadline in late July, the Wave will select from 10-15 companies, choosing from well over TechWomen Rising Accelerator 300 applicants, the majority of which derived from outside of Florida; the debut program will begin virtually at the close of summer or onset of autumn.

An inequality in tech market share bears out the need for the program. “For women-led startups, they continue to not get equal share of venture capital.  There’s still a lag behind male-dominated startups and the capital activity,” Olson says.  “That’s something on a global basis, across the U.S. and here in Florida.

“For women-led startups, they get about 16% of the capital.  But when you factor in companies exclusively led by women, that figure goes down to around 2%.  I’m not saying that women need a crutch or a handicap, but we want to do something intentional that will hopefully shine a light on that fact that this issue continues to exist.”

Working with its proven “Build, Launch, Grow” core philosophy, the Wave’s new initiative is borrowing from its successful TechDiversity Accelerator program, which launched in 2018. Akin to the diversity endeavor, TechWomen Rising takes selected companies through a 90-day program of workshops, coaching, mentorship and exposure to the Wave’s extensive mentor network.  Slightly contrasting from TechDiversity Accelerator, the new program will include content geared specifically for women, such as prepping a presentation for a group of all-male investors.

“When we find truly exciting and innovative companies – wherever they may come from – they become part of our program, plugged into our resources and our community and they see the value of the program and the tech talent we’re surrounded by.” — Linda Olson

While women make up about half the national work force and approximately 30% of the tech employee population, change need come from the money men for gender and opportunity equality within the industry.

“A lot of it has to do with the venture capitalists themselves,” Olson adds.  “When you look at who the limited partners are in most of these firms, it’s male-dominated, and that can influence which companies get funded and for how much.”

Ideally, the 2020 world should already present gender equality.  Sometimes, if not often, change requires an accelerant. “If we do nothing, and just wait for this to change organically, I just don’t know if the change will happen fast enough,” she says.  “We’re hoping this program will be a catalyst in trying to really push us to that point of equality.  And I always try to be sensitive to not be ‘anti-white male,’ because this program, like our TechDiversity Accelerator, is about giving people more pathways, more options, so that everybody can have better opportunity to participate in our economy.”

Along with continued onus on growing opportunity in and around the Orange State, Olson aims to see the Wave’s efforts tide across the country.

“We may not be Silicon Valley, and that’s okay.  But I like to think that we’re the next Bay Area that people talk about, when they talk about technology,” says the CEO.  “If we can help areas like Florida grow a better, bigger and stronger start-up ecosystem, that should not only help grow the economy here – it can have a ripple effect everywhere.”

With the country still well within the grip of the novel coronavirus pandemic, Olson isn’t one to offer a pejorative purview; rather, the Wave frontwoman sees the COVID months as a time for proactivity.

“As we build this economy back up, we have an important opportunity to do so in a way that has more equality baked in from the very beginning. There’s so much room for innovation right now.  And we need all the brains working to solve these problems; we don’t want the next woman out there sitting on a billion-dollar idea to not pursue that because she sees too many obstacles in the way.”

For both sides of the gender line, the timing may well be ripe for entrepreneurial intrepidity, a spirit echoing the Wave’s core mission.

“Many people are, of course, thinking a lot right now about how they’re putting food on the table, with many wondering how they be more in control of their destiny,” Olson concludes.  “You’ve got people who are either unemployed or under-employed right now, and maybe it’s less risky for them pursue their entrepreneurial dream today than it was six months ago.” 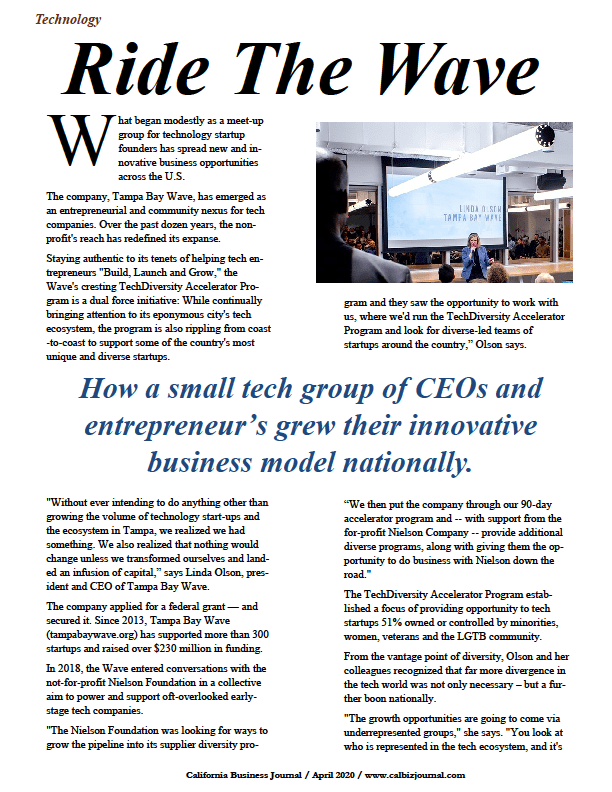 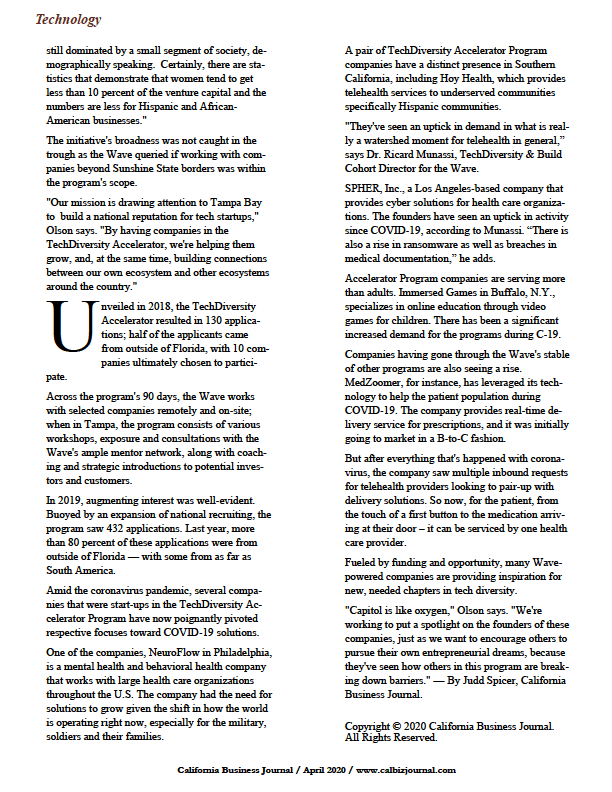