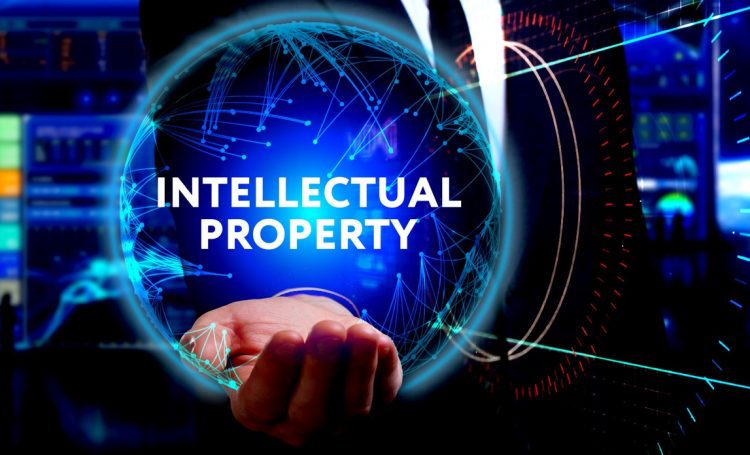 David Berstein, the attorney who helped settle the famous “Voice of the East” painting scandal case, is now off on his own, successfully handling more IP issues for clients.

The woman was strolling through a Southern California Costco store one day, checking off items on her grocery list when something caught her eye.

Several paintings were being shown in a display inside the store. One painting however, was very familiar to her. It looked very much like one her brother, renowned Chinese artist Cao Yong, had created.

Something wasn’t quite right though.

Upon closer inspection, the frame and canvas were not what her brother would use. She then noticed the signature and certificate of authenticity were completely fake. She immediately approached the vendor working the display and explained that the painting was a forgery, when much to her surprise, he picked up the piece and began running out of the store.

With the assistance of store management, she obtained the painting from the vendor and purchased it, later going to more Costco stores in the region to buy other fraudulent copies of her brother’s work. When she brought the paintings and the concern to the law firm of Burkhalter, Kessler, Goodman & George, that’s when David Berstein got involved.

Working as a litigator on the case, Berstein fought the big-box giant and the vendor, Day-O Graphics, until they settled. While the parties did not make the terms of the settlement public, Yong was so pleased with Berstein’s work that he gave him a limited edition of “Voice of the East,” a work of art commissioned by the Beijing Organizing Committee for the Olympic Games in 2008. It is proudly displayed in Berstein’s Newport Beach, Calif. office.

A decade later, he is still taking on giants.

In September of 2017, Berstein broke out on his own, establishing Berstein Law, a firm he runs himself with one associate, J.R. Dimuzio, handling corporate matters and IP disputes. It’s quickly becoming a standout in the growing realm of IP law, and yet if he hadn’t watched a certain movie in the 1990’s, it may have never happened.

Like many young adults out of college, Berstein hadn’t decided what he wanted to do with his life and found himself working in the loan division of a bank.

“This is not what I want to do,” he thought to himself one day. Recalling that he had enjoyed both law and biology courses at California State University, Northridge, where he earned a B.A. in psychology, he pondered whether he should try law school or medical school?

The answer would come straight from Hollywood. He happened to watch “My Cousin Vinny.” In the film, two wrongly-accused young men hire a lawyer, the fish-out-of-water cousin Vinny, played by Joe Pesci, who after many hilarious missteps and encounters with local characters, gets the criminal charges dropped against his clients. The process proved so captivating to Berstein that he chose law school.

“I found it fascinating,” he says. “It was a sign, as far as I was concerned.”

Today, Berstein is known for his high-quality legal services, minus the high fees that typically come with a large, name-brand firm.

“I’ve gone up against the big firms and while there are fine attorneys out there, their work product isn’t any better than what I pride myself on here,” he says, noting that his fees are often nearly half of what larger firms ask. Berstein personally works on every single case that requires his expertise – something that doesn’t necessarily happen at the bigger firms.

“Some clients are brought into a firm by a partner,” he says, “and that’s the last they see of them. They only get to deal with an associate. Not here.”

The road to obtaining federal IP marks, which is processed through the United States Patent and Trademark Office, can be a very long one. A basic copyright can be obtained within six months, but a trademark can take up to a year, since the applications are published for 30 days. This process, managed by the USPTO, allows other companies to file an opposition if they feel the new trademark would harm them. He says how often this becomes a hindrance depends on the circumstances.

Take Monster Energy as an example.  “Monster is very aggressive in opposing any trademarks that contain the word ‘Monster,” and that can in any way be associated with their business,” Berstein says. But what if a new business owner absolutely must have the word ‘Monster’ in the company name?

“You can have a fight on your hands,” Berstein says.

Litigating an IP matter in court can take between 18 months and three years and the cost can be ruinous to a small business.

“One of my absolute main goals is, if a dispute can be worked out sooner rather than later, let’s do it. And I engage opposing counsel in that manner,” he says.

“Minimizing risk is something that new companies don’t want to spend money on, but they should. Do things right at the beginning.”

If someone is infringing a copyright or trademark, Berstein attempts to get it worked out with a cease and desist letter. If that doesn’t work, it’s on to a federal lawsuit. “It’s always in our clients’ best interest to try and get things resolved sooner rather than later, and that’s our goal: not to drag our clients through endless ligation.

“That is what distinguishes us from large firms,” he adds. “I’ve seen a trend where large firms take their clients on this wild litigation ride and bill them out a substantial amount of money, when the case could have been resolved to where everyone was happy. My absolute main goal is, if a dispute can be worked out sooner rather than later, let’s do it. And I engage opposing counsel in that manner.”

Most of his clients’ success stories come from being able to put litigation behind them and to just get back to running their business. “To let them do what they do best,” he says.

It’s common sense advice like that which has proved rewarding to Berstein in many ways. With clients and ongoing cases up and down the coast, he is looking to add another associate or a well-qualified paralegal in the coming months.

The small setting has worked well for Berstein, allowing the firm to focus solely on its clients and take down some big fish. He is proof positive that motivation and concentration can launch a successful practice, even in a sea of competition. 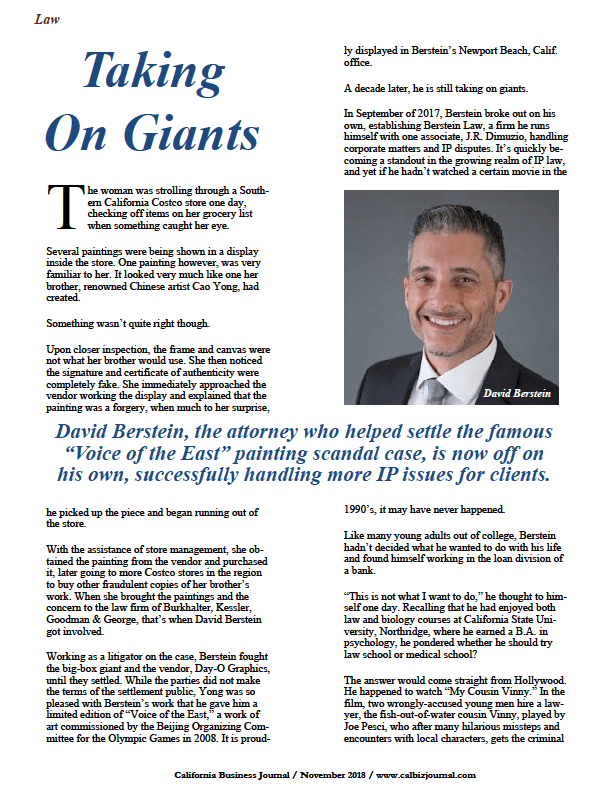 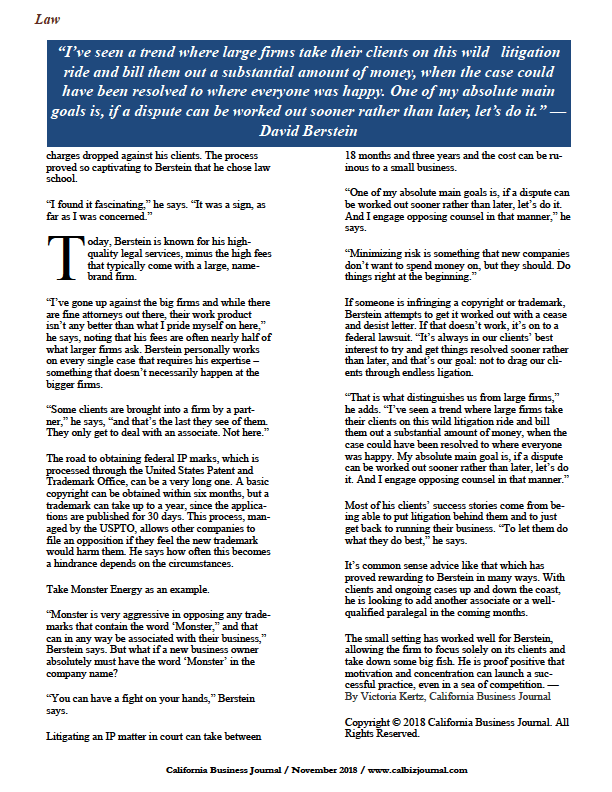