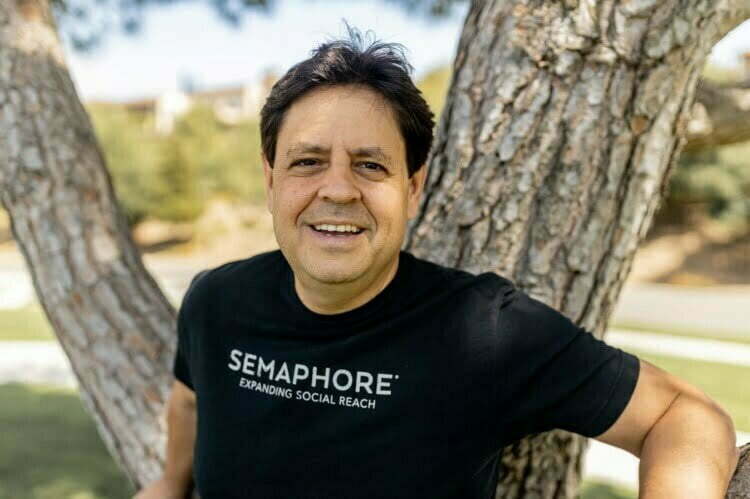 The power of influencers is on the rise as more companies shift their marketing budgets away from other media platforms. The industry is expected to grow to $13.8 billion this year.

Mike Bienstock, CEO of Irvine, Calif.-based licensing company Semaphore, has been at the forefront of the evolution of the wildly successful YouTubers’ era since the early days when making videos turned from a hobby into a viable career option.

“Now, we’re 11 years later and people act surprised about new media stars and how they have significant businesses and real businesses and they’re like ‘oh, it’s all such a new world,’ and I just laugh. I’m like, it’s been growing for 10 years,” he says. “That’s something that today has differentiated our company because we’re one of the few that really took a very big focus on supporting small business creators tied to the new media economy.”

Bienstock comes from the world of finance where he kept hearing customers complain that they have a hard time finding people to support their growing businesses. That eventually led him — and Semaphore co-founder Nate Higgins — to create a family of companies to address that need.

Semaphore features a suite of services, specifically financial and media services, for small business owners. It started with financial services in 2002, followed by Semaphore tax and business in 2004, new media in 2010 and licensing in 2019.

These days, Bienstock and his team help influencers connect with major brands and the fans who embrace them. The process is a mix of data and art, resulting in a pairing of a creator, manufacturer and distributor with the potential of making millions of dollars for each side.

The latest licensing deal – Selfless by Hyram – is a skincare line from beauty mogul and mega influencer Hyram Yarbro. The five-product line is available exclusively in 663 Sephora stores worldwide as well as on Sephora.com.

Crowds flocked en mass to Sephora’s New York City studio on June 24 for the launch of Yarbro’s line — and to see the creator who is taking fans along his enlightening and exciting journey for months with social media activity. The 25-year-old Hawaii-based influencer is renowned for talking about beauty and skincare with the focus on ingredients and transparency. He has 4.59 million followers on YouTube, 1.2 million followers on Instagram and 6.8. million followers on TikTok.

It’s not all about the numbers. “The magic in any licensing deal is in the creator’s connection to his fans,” Bienstock says.

“The audience of our creators have this tremendous emotional connection,” he adds. “Influencers are seen as a friend and a trusted contact. That’s the big story with why there’s such a big opportunity here and why our launches have been so popular. Audiences are enamored with influencers because he or she becomes like a friend who did something new and exciting, so you want to support it and be part of it.”

Yarbro’s connection is clearly extraordinary. When he recommended CeraVe, fans rushed to the stores, leaving shelves empty. “Everyone Hyram has worked with in the industry on the brand side gushes over his connection to his audience and from their perspective, they saw it through elevated sales,” Bienstock says.

Semaphore started working with Yarbro on Selfless by Hyram in 2020. He had strict requirements that his new line needs to be sustainable and have a rock-solid social impact. After interviewing many firms, Bienstock and his team met all the requirements by connecting Yarbro with The Inkey List, a U.K. – based skincare brand sold at Sephora since 2019, founded by Mark Curry and Colette Laxton.

During the creation of the brand, Yarbro stood shoulder to shoulder with the chemists and dermatologists. “He truly helped create this product. It’s the representation of him and that drives the fans and that drives the excitement for his product,” Bienstock says. “The natural turn of events is to drive sales.”


One of the pivot points for Semaphore was the introduction of Google AdSense, strategically incorporated before it became mainstream. Suddenly, at that time, monetizing videos became easier. It did, however, present challenges for influencers who started seeing significant amounts of money in their bank accounts but didn’t know how to handle the business side of the product.

Enter Bienstock, who says: “For us, it was a very exciting time because we had experience with traditional media and these new media stars started coming onto the scene and nobody understood what really was going on. Being familiar with creators’ accounting and taxes got us inside the door. We saw firsthand that there is a real business there. It just needed to be nurtured and grown.”

The pandemic caused many brands to hit pause on licensing as customers were not coming to the stores, but creators saw increased engagement at the same time. Yet the world of influencer marketing skyrocketed – and continues to daily.

Another shift Bienstock sees is brands pulling away from TV advertising in favor of new media – great news for Semaphore. “It’s already happening,” he concludes. “We’re seeing more and more opportunities for influencers going forward, and some of the fairly high-profile deals that our company has completed over the past year are opening eyes with respect to what is possible.”

3 Benefits of Tradelines for Your Business

How to Spend Less Without Missing Out

New to Skincare? What You Need to Know

Why Is Sunscreen So Important?

How to Spend Less Without Missing Out

3 Benefits of Tradelines for Your Business

Why Is Sunscreen So Important?

New to Skincare? What You Need to Know