With his vast business experience and his calm persona, Mark Thomas has emerged as a master in helping CEOs weave through the delicate and challenging issues they face on a daily basis.

When Mark Thomas was in negotiations for the sale of his Southern California technology business last year, there was a defining moment when he wondered, “So what am I going to do next?”

Initially, he simply figured that he would just launch another business or become CEO of an existing company. But as the sale moved steadily along, he thought about the risk of starting a new business, the unknown obstacles he would most definitely encounter, the overall stress and pressure, and the 16-hour work days.

“I wanted to do something where the focus wasn’t on me and building for my own personal gain and/or the gain of shareholders,” he says. “I want to pay it forward. I wanted to make a difference for other people.”

Soon thereafter, Vistage, the renowned CEO peer advisory and executive coaching company, approached him about joining its organization, which helps CEOs weave through the delicate and complex issues they face on a daily basis in a dynamic and confidential group environment.

“That really resonated with me,” Thomas says.

Earlier in his career, Thomas was a member of Young Presidents Association (YPO), which is similar to Vistage but “structurally different,” he says. Yet he was reminded of the great experience it was and how much it benefited him professionally and personally.

It was at that very moment that Thomas crossed the proverbial line and made the decision to completely shift his life and profession.

“I felt this would be a perfect transition for me,” he says.

Perfect is the operative word. With his experience and personality, Thomas is perfect for the position. He fits the Vistage mold so ideally, it’s downright scary.

“When Mark did our behavior profile, his scores were astonishingly high,” says Vistage’s Jackie Kibler, Regional Director-Pacific. “We knew immediately he was a perfect fit for us.”

Thomas is one of those individuals whose sincerity, honesty and trustworthiness are immediately recognizable – in seconds – through his face, eyes and calm temperament. He is soft-spoken, polite and respectful of everything and everyone around him.

“He defines what it is to be likable,” Kibler says.

Thomas’ combination of deep business experience and his affable persona are among the reasons he is already a rousing success at Vistage and with his CEO peer advisory group. Thomas interviewed more than 40 CEOs before settling on the final candidates to form his group.

“We feel like it’s a very exclusive club,” says Cris Bennett, the owner of four Good Stuff Restaurants in Southern California. “We feel honored to have been selected and it’s amazing how effectively Mark runs the group. He’s created a perfect environment.”

Recently, a guest speaker lecturing on “The Organized Executive” pulled Thomas aside halfway through the event and whispered, “Your group is one of the highest functioning collection of CEOs I’ve ever encountered.”

That’s a reflection of Thomas, his demeanor, preparation and his talent.

Thomas is a gifted business leader and entrepreneur with more than 25 years of experience leading world-class companies in the technology and manufacturing industries.

After graduating from USC with a Bachelor’s degree in business finance, Thomas earned his MBA from Pepperdine University and then launched his career at his father’s technology business.

Following his father’s retirement, Thomas took over as CEO and grew the business from $34 million to over $70 million in seven years.

He then went on to serve as EVP and CEO of two venture capital startups. He engineered two lucrative corporate turnarounds then went on to own and operate two businesses: a power electronics company and a Mergers & Acquisition advisory firm.

“I have a diverse background,” he says. “I’ve run privately held companies and publicly-traded companies in technology, manufacturing, distribution and service. That experience resonates with the CEOs I interview and eventually selected to form my group.”

He targets CEOs running businesses that are similar in size to the ones he ran – $5M to $250M in revenues and 25-600 employees.

His criteria to select his CEOs start from the finance side, where he searches for growing, financially-viable companies.

“We’re not about fixing distressed businesses or saving companies that aren’t financially viable,” he says.

The CEOs he chooses need to be “growth-oriented and open-minded,” he says. “Generally, CEOs are smart, ambitious and accomplished people who might have an ego that can get in the way of being contributive in a group setting. I look for people who can set their egos aside and are willing to be vulnerable and willing to be held accountable to themselves and the group.”

What Thomas has created is a safe, non-judgmental space where his CEOs are comfortable disclosing sensitive issues and problems that they’re dealing with in their professional and personal lives in a way that engenders trust and elicits non-judgmental feedback.

“I maintain an atmosphere to where we can speak openly and not feel embarrassed or afraid to bring anything up,” he says. “I don’t want anyone feeling defensive, apologetic or guarded. I want them to be honest with themselves. When we have that, a lot gets done.”

Thomas makes one thing clear: he does not solve a CEOs problem alone; it’s a collaborative process that enables the group to find solutions and help each other make better decisions than they could do on their own.

“It’s not about me,” Thomas says. “I don’t have all the answers. What I do have is an ability to ask questions and to help the CEOs formulate and articulate their thoughts in a way that leads to better solutions and better decisions.”

It’s not always about problem solving either; it’s sometimes about new opportunities or deciding among different strategies as to what would be the best way forward.

“Whatever it is,” he says, “I’m dedicated in helping my CEOs succeed and achieve their most ambitious definition of success in both their professional and personal lives.”

[Editor’s note: Click below to see the PDF version of the article]. 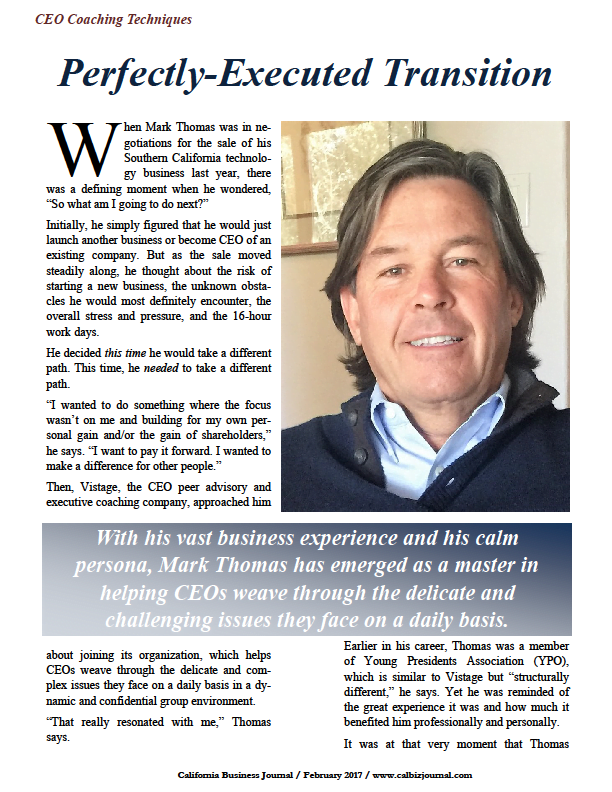