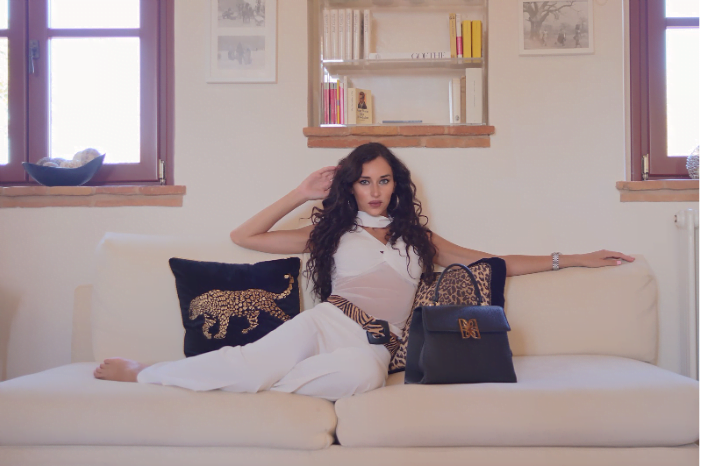 This week at a villa in the village of Morro d’ Alba in the Marche region of Italy, which is right below Tuscany, DEIJI model, Rashida Aboufaris, met with DEIJI Creative Director Mark Schwartz and DEIJI photographer Toni Pierdome for a session to capture the unique elegance behind the line for DEIJI.com.

Hand curated in Italy with love, as Schwartz says, Aboufaris modeled various DEIJI products, including luxury belts such as The Victoria, which is an all-black leather belt with DEIJI’s emblem etched into a golden brass belt, and the black version of The Elizabeth I, which is designed from an all leather signature tote bag that Schwartz breathed into existence a few weeks ago. Originally based on a personal oil-based painting on canvas patterned in black squares with pumpkin, beige, and red accents, The Elizabeth I is available for pre-order in black, brown, and Schwartz’s original canvas design. The Elizabeth I is officially for sale on September 1st, 2022.

Furthermore, Aboufaris also posed with the first of DEIJI’s beautiful heels, The Le Belle, meaning ‘the beautiful ones’ in Italian, an all-black and pink platform sandal with a twist of gunmetal in silver, and The Cleopatra, which is another signature tote bag designed from one of Schwartz’s oil-based canvases in a black circle pattern with beige, pumpkin, and black tones. The Le Belle is available for order now at DEIJI.com, and The Cleopatra is available for pre-order and officially for sale on September 1st, 2022. Additionally, Aboufaris posed with various DEIJI belts, such as Tuhe Jaguar and The Lioness, which are all leather and DEIJI’s ode to the beautiful “big cat” queens of the jungle.

“It was actually rather difficult to book Rashida,” Schwartz says. “She was booked out for the next two to three months,” he further explains. Yet, given Aboufaris’s exotic nature, as she is both Italian and Moroccan, which is an ethnicity from the country Morocco in Northern Africa, it became apparent she was the ideal woman for this DEIJI photo shoot. “She had this very natural but ethnically aesthetic aura,” Schwartz clarifies.

“The photo shoot really fell into place, even the way the products looked on her,” Schwartz details of the villa. “Outside, all you could hear was the wind and nature…cicadas buzzing in the summer heat,” he further expresses. “Positive vibrations from both Rashida and the surrounding environment aided in creating a breathtaking photo shoot,” Schwartz explains.

This is the focus of DEIJI: to utilize the natural wonders of the world to delineate that human beings are a beautiful canvas in which DEIJI is the pop of color that aids in the exuberance of a beautiful masterpiece between women and DEIJI magic. “Rashida was able to capture DEIJI’s essence in such a way that it was clear to see that our elegance in beauty brings out the best in women,” Schwartz says.

Highlighting this beloved belief, DEIJI is a worldwide brand that envisions inclusiveness for all racial and ethnic backgrounds. Accessories such as the luxurious The Cleopatra, The Octavia, and The Mona Lisa, all of which are part of DEIJI’s signature collection, aim to celebrate the diversified, poised, and elegant nature of all women. This is especially true, given that the signature collection’s namesakes derive from an array of historical women from various ethnical backgrounds that altered the course of history for the better.

“We design accessories that are culturally inclusive for all,” Schwartz solidifies. “Essentially, DEIJI is in the business of capturing the essence of elegance,” he further expresses. Therefore, DEIJI chooses its models based on the powerful annotations behind what makes the line unique: the celebration of the beautiful and powerful ‘woman’ globally.

When shooting, Pierdome manipulates models in what might be considered uncomfortable positions, such as athletic or yoga poses, to bring out the best in [the models]. “The positioning at first might be very uncomfortable, but as Pierdome works with a model, this energy is created through his kind and gentle nature,” Schwartz explains. “Poses that might have been considered uncomfortable relax into comfortability through Pierdome’s direction and vision,” Schwartz concludes.

Mark Schwartz is intimately involved with the production of DEIJI, which is made at the same facilities as the most luxurious Italian-made brands with the same skill and quality level. Deemed a certified genius, he graduated from Julliard in the late 1970s and studied under greats like Robert Vivier and Andy Warhol. Schwartz soon became an icon in his own right. Over Schwartz’s 40-year career, he has collaborated with fashion houses such as Gucci, Chanel, Balenciaga, and Marc Jacobs. He has also created footwear per personal request for many celebrities, including Jackie Kennedy Onassis, Madonna, Oprah, Sharon Stone, Julia Roberts, Lady Gaga, Katy Perry, JLo, and Hillary Clinton.

DEIJI was inspired by Asian Pop Culture, Italian Moxy, and American Ingenuity. Combining all of these elements, Schwartz and Wilkins want people to find the simplicity in life while being devoted to their ambitions and creative endeavors. Fashion comes and goes, yet DEIJI was created in its own amiable, elegant, and luxurious style. Its uniqueness has evolved from the synergy of its chic design and electrifying elements of the natural world. DEIJI is the evolution of style.

DEIJI’s philosophy is defined by the notion that human beings are a canvas, and they are the pop of color that allows consumers to express themselves. Memories will always be made, but with DEIJI, people can keep a piece of them through every life event. DEIJI’s objective is to capture the essence of the innovative spirit through wearable art.

Hand-made in Italy, DEIJI follows a strict ethics code surrounding product creation with sustainability. DEIJI is not only hoping to impact the world of fashion but the physical world as well. They want to design, produce, and implement their fashion lines in a way that helps the environment and doesn’t hurt or take away from it.

Schwartz explains, “Our goal is to create products that pollute our world less to inspire you and those around you.”

All their dyes are vegan, and their leather is naturally produced with no harmful pollutants put into water sources. “We respect the environment in the way that we dye and treat our leather,” says Schwartz. Furthermore, any resources that are considered waste are collected and recycled.

Finally, combatting harmful trends the fashion industry is notorious for, DEIJI pays fair wages and practices the ethics of no child labor while implementing safe working conditions for workers. This includes hands-on engagement with the communities they source from, so they can continue to give back.

About the Author: Miah Shepperson is a brand and marketing developer for Fairmarkbrands. Graduating from Millersville University, she has a Communication’s degree with a minor in Journalism. She is currently pursing her masters in Strategic Communications at Liberty University. Shepperson is the lead content writer for DEIJI.

What to Wear with Your Short-Sleeved Dress this Summer
Tags: AmericanbestbookbrandcertifiedconsumersdeveloperenergyfocusJaguarluxurymarketingnaturalNew DEIJI Photo Shoot in Morro d' Alba Region in ItalyNorthernPopwaterwriteryoga
ADVERTISEMENT

What to Wear with Your Short-Sleeved Dress this Summer