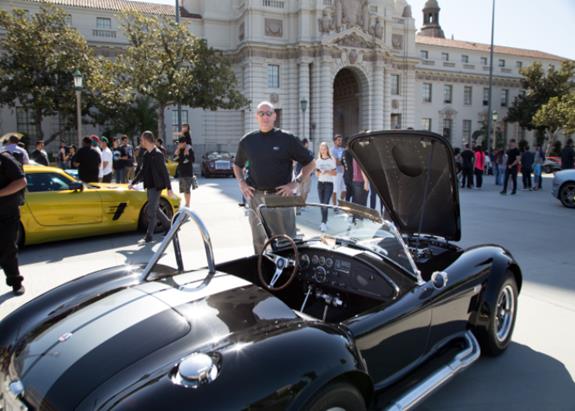 DURING A CASUAL BREAKFAST EARLY ONE MORNING AT THE TERRACE BISTRO AT THE POSH LANGHAM HOTEL IN PASADENA, CALIFORNIA, Andrew Arizmendi of the Rusnak Auto Group turned to his friend, David Lee, one of Southern California’s most famous Ferrari collectors, and said, “You know, let’s create a community car event where people can go on a Saturday morning, drink some coffee, and showcase their super-luxury cars.”

That conversation gave birth to Morning Octane, an event sponsored by Rusnak Auto Group and Lee’s company, Hing Wa Lee Jewelers, that is now in its third year – and growing massively in popularity. This past Saturday morning at the historic Pasadena City Hall, hundreds of people showed up with their stunning cars from Lee’s $3 million Ferrari Enzo and Bill Gilmore’s exquisite 1965 Shelby Cobra to Arizmendi’s breathtaking lineup of Rusnak vehicles including Maserati, Bentley, Rolls-Royce, Mercedes, BMW and Audi.

As Arizmendi looks at the mass of people enjoying themselves on this wonderfully warm and clear Saturday morning in the shadow of the San Gabriel Mountains, he smiles and says, “We all have one thing in common here. We love cool cars.

“There is no other automobile event like this in the San Gabriel Valley,” says Lee, whose collection of Ferraris is legendary – among his 11 cars is a 1987 Ferrari 288 GTO Evolve with a value of $10 million. Only five exist in the world today.

Everywhere you look on this magnificent morning, all you see is a sea of pristine and glamorous luxury vehicles. One of the most spectacular is Rusnak’s 2015 Rolls-Royce Wraith, featuring a V12 with 633 horses.

“The whole idea behind this new model is that is has a mysterious, cloak and dagger feel to it,” Arizmendi says, gently touching the magnificent white machine. “It’s a rocket with complete luxury.”

Just like Arizmendi’s Maserati GTC convertible, which is all “power and elegance,” he says. “It’s pure sport, like a Ferrari.”

Another vehicle that captures the crowd’s attention is Rusnak’s 2015 Mercedes S65 Coupe with 629 horses.

“This is sick,” one participant says, marveling at the slick vehicle.

“This is a performance car that is also a daily driver,” Arizmendi says. “It’s a brute. It has all of Mercedes’ racing technology but is the very definition of luxury. It wears two hats.”

As Arizmendi watches a stunningly rare 1967 Datsun Fairlady 1600 – in turquoise pass by, his says, “This is the place to be if you’re a car enthusiast. The cars here represent the passion you have for the vehicles. It’s also an expression of your success.

“Plus – it’s a rush driving cars like these,” he adds with a laugh. 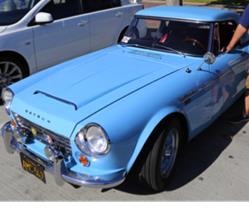 These sexy vehicles offer a sense of exhilaration with their speed, power, style and incredible engineering.

“You can only appreciate all of that when you go out and drive cars like this,” Arizmendi says. “It’s an amazing feeling.” 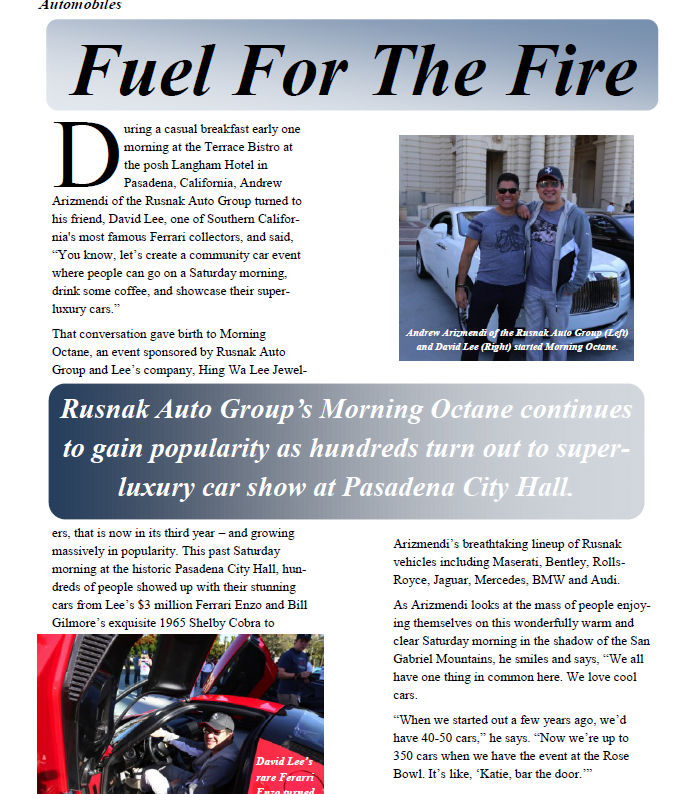