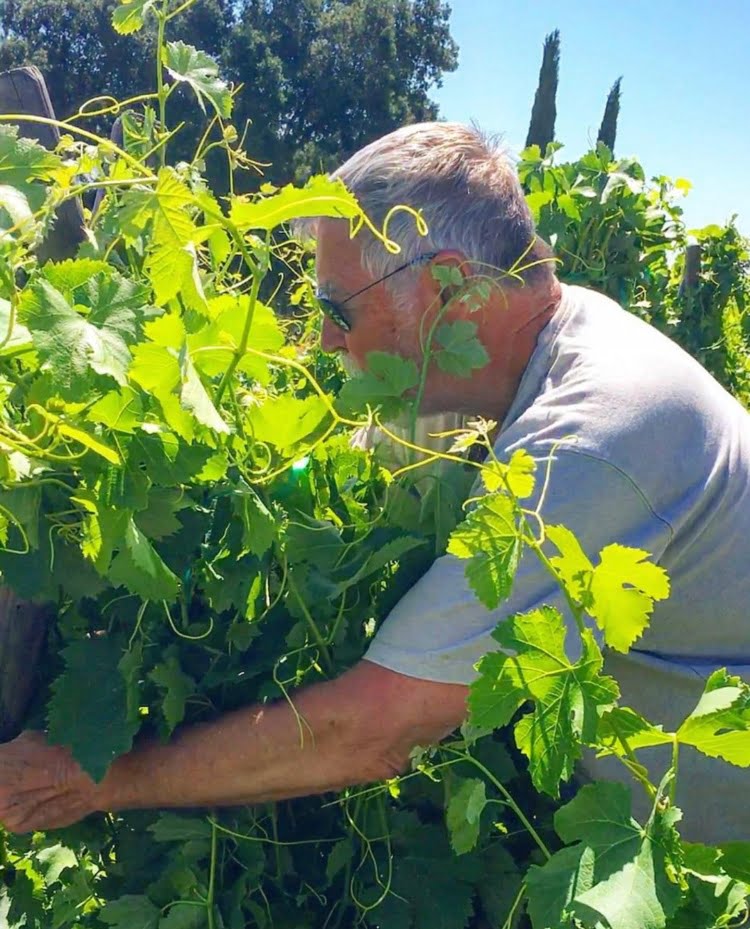 The legendary winemaker's meticulous care and skills has resulted in the sale of more than three million cases of wine since launching The Winery.

When California businessman and wine industry M&A consultant Steven Jones looked to add Rabbit Ridge Winery and Vineyard to his portfolio in October 2020, he knew that in addition to acquiring a Paso Robles wine institution he would also play a vital role in helping continue the legacy of the Winery’s founder, renowned vintner Erich Russell.

As an entrepreneur, Jones believes it is necessary to immerse yourself in a business and understand its nuances before taking the plunge. When originally pursuing his interest in the wine industry, Jones sought work in sales — best way to learn a business, he maintains — and even went to school to become a sommelier.

When Russell decided to sell his business, he saw in Jones and his associates, a team who could take over the day-to-day business reins allowing him to focus his time on winemaking.

“One of the most important parts of the decision for me was that Steven appreciated that one of the most important ingredients in making good wine was the grapes. He appreciated the fact that wine is made in the vineyard at artisanal wineries. Without having to spend my time selling the wine and paying the bills, I can spend more and more time in the vineyard and hands on in the cellar,” the winemaker says.

For Jones, Rabbit Ridge was both a sound business acquisition target and a unique opportunity to become part of California wine industry history.

“We saw in Rabbit Ridge the opportunity to revitalize an iconic California wine label and partner with one of the premier winemakers of our generation.” — Master California Winemaker Erich Russell

Meanwhile, Russell’s own storied four-decade wine industry history began when he was a San Diego schoolteacher and winemaking was a personal passion. He attended San Jose State on a track scholarship where his many successes as a long-distance runner earned him the nickname ‘rabbit’ by his teammates, a handle he would enlist years later by adapting Rabbit Ridge as the official name for his winery.

After two years at San Jose State, Russell moved back to his hometown, completing his studies at San Diego State where he received a degree in Environmental Geography. For the next nine years, he taught junior high school and coached high school track, all the while devouring books on the art of winemaking.

“My garage was a winery and my front and back lawns were a vineyard. My neighbors really did not like me much,” Russell says with a laugh.

His initial foray into actual winemaking began with his home garage serving as center of operations, until he entered a Chardonnay into the amateur division of a California State Fair winemaking competition. He won the Gold Medal.

Among the tasters was the winemaker for Sonoma’s Chateau St Jean who promptly offered Russell a job in the famed winery’s cellar. From there, Russell was recruited by Simi Winery, where he joined as a cellar worker and was soon promoted to senior cellarman. It was during his stint at Simi where his first commercial harvest of Chardonnay yielded the Sonoma winery its first local festival Gold Medal.

He was then hired by Belvedere Wine as assistant winemaker and rapidly moved up the ladder to head winemaker and finally President of the Premium Division of the winery while remaining head winemaker. In addition to showcasing his innate winemaking skills, Russell’s tenure as a top executive at Belvedere gave him important insights into the business of winemaking, lessons that would prove invaluable when he launched Rabbit Ridge Winery in 1981.

Soon after its launch, Rabbit Ridge began to make a name for itself along with a reputation for excellence, producing up to 25,000 cases of Chardonnay, Zinfandel, Cabernet Franc, and Cabernet Sauvignon as well as Merlot and Pinot Noir under a separate premium wine label.

“My first vintage was two barrels of Chardonnay and two barrels of Zinfandel. I knew that if I could not sell the wine it was a small enough amount that I could drink it,” Russell says with a smile.

He himself entered the elite group of winemakers that have earned a coveted Connoisseur Guide Winemaker of the Year Award. He also had three wines that were ranked the prestigious Wine Spectators Top 100 wines in the world and a Zinfandel that became Food and Wines magazine’s Best Wine Value of the Year.

As a result of the many successes achieved by Russell, it became apparent that Rabbit Ridge was outgrowing its Sonoma facilities.

“In looking for a new location I wanted to be able to have more grapes of my own so I could control the process from start to finish. Land was already far too expensive in Sonoma County for that to ever happen,” he says.

Together with his wife Joanne, Russell made several trips to Paso Robles, where he was smitten by the area, finding it ideal for his traditional approach to winemaking.

“I immediately became enamored of the climate and soils of the area and knew this is where I wanted to plant grapes and cultivate our wines.”

In 1996, Russell and his family completed their first planting as their winery grew to encompass three vineyards comprising over 150 acres.

“When I tasted wines in Paso Robles, they were making wines in whatever vessels they could – plastic totes and bins – yet the wines were quite good. The grapes were planted in the old 8-foot by 12-foot spacing and mostly in the hotter Eastside of town. I said when they get modern, close-spaced vineyards planted on the Westside hills and current technology, this area is going to explode,” he says.

Today, Russell continues to apply his care and skills that have resulted in the sale of more than three million cases of wine since launching Rabbit Ridge Winery, growing a variety of grape varietals on its vineyards. And as part of the winery’s new ownership group, Jones “is committed to ensuring that Rabbit Ridge continues to serve as one of the premier wineries in Paso Robles and that its winemaking remain a family affair.”