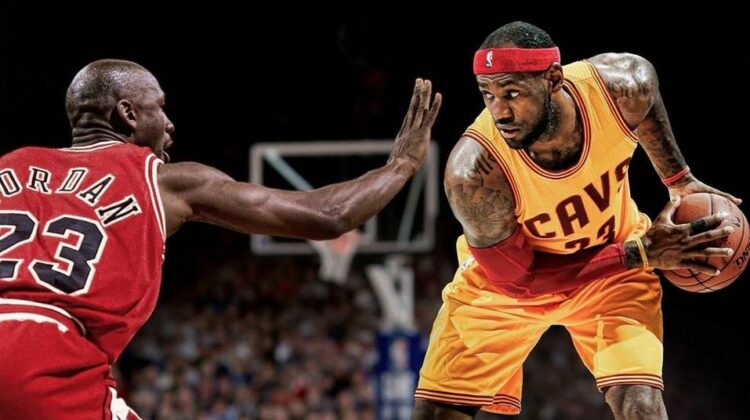 Who Will Be Remembered As The Greatest Basketball Player Of All Time?

There isn’t a more compelling debate when it comes to the greatest NBA player ever.

Jordan considers himself the G.O.A.T. Lebron says he will not be retiring until he unquestionably holds that title.

But, who do you think is better – Lebron or MJ?

He has two Olympic Gold medals and was part of one of the greatest U.S. National basketball teams. If the Olympics hadn’t prevented professional sportsmen from competing then Jordan would have undoubtedly had a few more golds to his name.

MJ was also a 2-time NBA Slam Dunk champion — in 1987 and 1988. It was his incredible slam-dunking abilities that earned him the nickname Air Jordan. This was what he later named his shoe collaboration with Nike. He starred in SpaceJam and has one of the most successful collaborations with Nike of all time. He was given the Presidential Medal of Freedom. And now, he is the owner of the Charlotte Hornets.

James has been an NBA All-Star (2005–2022) for 18 consecutive seasons. He sits second on the list of most All-Star call ups with Kobe Bryant and one call up behind Kareem Abdul-Jabbar. He has been the captain of one of the teams since 2018. The only other active player who is in the Top 15 of this list is Kevin Durant.

James was the first overall pick in the first round of his draft in 2003. He was just as highly sought after when he became a free agent in 2010. It was reported that over 10 teams were in talks with Lebron — in the end, he moved to Miami.

This season, he became the only player in NBA history to record at least 30,000 points, 10,000 rebounds, and 10,000 assists. He now holds the NBA record for all three. This achievement was monumental enough for people to start comparing Lebron to all-time greats like Jordan and Kareem Abdul-Jabbar.

Firstly, Jordan and LeBron play very different styles of basketball and they played in different areas so it is hard to compare them on that level.

The second reason we don’t think there is a correct answer to this question yet is that LeBron has not retired yet.

At the moment, Jordan has more trophies than him but LeBron may go on to win more. However, LeBron has him beaten already in most other categories. He holds the league records for most points, rebounds, and assists. He also holds the record for most consecutive All-Stars call-ups.

We won’t know who the G.O.A.T really is until LeBron retires.

Then, what about Kobe Bryant? He has more rings than James and more points than MJ?

Here are some of the best articles on the Jordan-James debate:

Coast to Coast: The Impact of Sport in Maryland