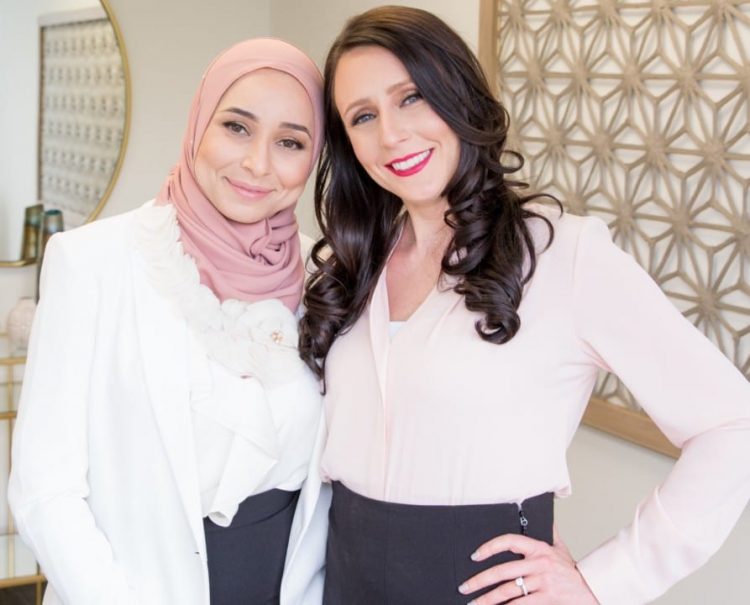 Deeply religious and cultural values complicate the divorce process. But Jeanann Khalife’s experience and philosophy in the mediation platform – versus the contentious litigation process – is doing wonders for couples of all faiths, including Muslim couples.

Three years ago, a Lebanese couple of Muslim faith walked into Lani Baron’s law firm to discuss divorce, something that is perhaps the most highly sensitive issue in many cultures and faiths, particularly for Muslims.

“Neither the husband or the wife spoke English,” Ms. Baron recalls. So there was only one thing for Ms. Baron to do: call her best friend and fellow attorney, Jeanann Khalife, who is Lebanese.

Ms. Khalife, who was primarily focused on civil litigation at her law firm, immediately agreed to help her best friend and drove right over to Alternative Divorce Solutions, Ms. Baron’s firm located in Orange County, Calif.

“Jeanann jumped right in and took control of the situation,” Ms. Baron recalls. “She wound up mediating this very complicated case that had a lot of nuances because of the cultural and religious barriers. She was brilliant in how she handled it. I couldn’t believe how well she transitioned from what she was used to – civil litigation – to mediation.”

The husband was difficult to work with and was bringing various family members into the process. “But Jeanann set hard boundaries,” Ms. Baron says. “To be a good mediator, you have to hold the sugar and the knife, meaning you need to be kind but you also know where to draw the line in order to keep people on track for settlement. What Jeanann did was save the day. She made a difference right then and there. She made a very positive and immediate impact.”

Moments after the Lebanese couple departed, Ms. Baron turned to her best friend and said, “It’s time for you to join this firm.”

She did – and she has rapidly emerged as one of the leading female attorneys when it comes to working with couples of various faiths. Ms. Khalife conducts seminars and lectures at local mosques and other religious centers, discussing various legal issues, including divorce mediation.

“Anyone who finds their cultural beliefs essential to their lifestyle, I can relate to them because I’m a practicing Muslim and there are certain cultural and religious values that I hold dear to my heart,” she says.

Muslim couples in a struggling marriage have a very difficult time with the traditional legal system for many reasons — mainly because they are afraid that the already flawed system won’t work in their favor. So the mediation process that Ms. Khalife and Ms. Baron offer at Alternative Divorce Solutions has emerged as an ideal and more cost effective platform.

“Of all the faces I saw, Jeanann’s was the one that stood out to me because it was so bright and her smile was so warm and beautiful,” Ms. Baron says. “She seemed to have this special aura surrounding her.”

They became best friends instantly and have been together – or spoken to one another – virtually every day since.

“When Lani and I met, she just saw this girl with a smile – she didn’t judge me by thinking, ‘Oh, she’s wearing a scarf – she’s Muslim.’ We connected on a higher level and it’s always been that way since.”

While they worked at separate firms with different legal focuses, Ms. Baron always tried to lure her best friend over to her practice.

“Jeanann wanted to do civil litigation and I chose mediation,” Ms. Baron explains. “I always knew she was drained by the contentious fighting of litigation so I’d always joke, ‘Come over to this side. We don’t do that here.’”

But Ms. Khalife needed to prove to herself that she could do what she had originally intended to do, even though she was tired of the battling nature of litigation.

“I did always feel I was missing something in my life and profession,” she says. “I wasn’t seeing the fruits of my labor in the civil litigation arena. Then when I met with that Lebanese couple and saw the relief on their faces when they parting ways, that was the wake-up call I needed.”

She experienced firsthand for the first time that mediation is nothing like litigation and that if you want to settle a case in a respectable manner, mediation is a much more preferable platform.

“The divorce system is very flawed for everyone so imagine if something is flawed in the general world how it is for people with specific circumstances like religion and culture,” Ms. Baron says. “That’s why we have Jeanann here. Her gift is multi-faceted in how she helps people. To see how clients respond to her is amazing.”

Mediation is a new legal platform in many cultures and faiths, particularly the Muslim world. Many Muslims did not even know it existed … until Ms. Khalife came along.

Some people believe it’s forbidden in the Islamic faith to get divorced. It’s not. “But it’s certainly not encouraged,” Ms. Khalife points out.

“Our history says you need to work on your marriage and exercise all options, and at that point if you can’t come to a resolution and continue with the marriage, you can proceed with a divorce,” she says.

Ms. Khalife grew up in a Muslim household where she was taught to respect and balance Islamic values along with American culture. Her parents, both highly educated, encouraged her and her sisters to be anything they wanted to be. One of Ms. Khalife’s sisters is a doctor, the other an engineer.

“Our history has very strong women,” Ms. Khalife says. “Cultures have deluded that, but I always go back to the essence, the foundation of what things are: women are powerful and have a voice.”

“I consider myself a spokesperson for Muslin women,” she adds. “I encourage them to pursue their dreams, just like I did in my quest to become an attorney, and also to be strong culturally and religiously.”

Her drive is to educate women – and men – of various faiths to help them understand that there is help out there if you need it – and that mediation is the way to go versus the highly aggressive litigation process, which costs, in many cases, 90 percent more than mediation.

“Muslim women are not open to the idea of talking about divorce,” she says. “When I talk about it, they look at me in shock.”

They’re even more shocked when they learn that Ms. Khalife is divorced herself.

“When they learn about how I approach the divorce system through mediation, they see a voice for them and you see the sparkle in their eyes because not all marriages are the ideal marriage,” she says.

“Sometimes the way out is the right way – and we do it in a way that is not a contradiction with their religious beliefs and cultural upbringing. We give them a private atmosphere where they are in charge of the process. They are able to speak their mind freely within a legal structure and reach their goals.” 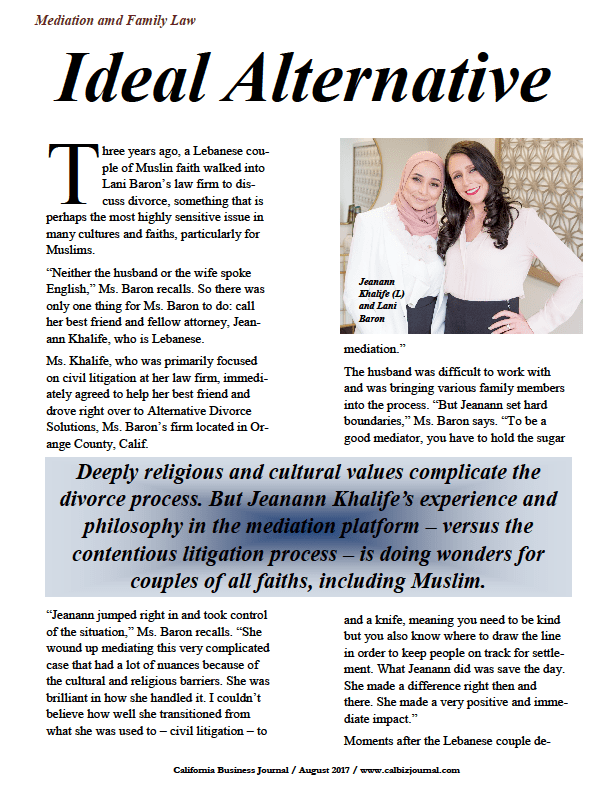