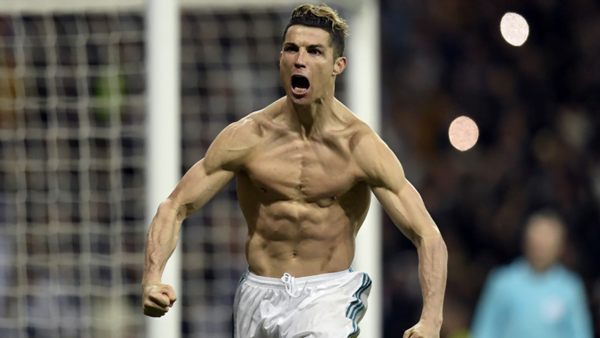 From diet to work outs, men across the universe are trying to mimic Ronaldo's regime.

When it comes to fitness regimes and health plans, Cristiano Ronaldo isn’t shy about sharing his techniques with his millions of fans. Whether he’s posting pictures of meals on Instagram or working out via YouTube videos, the most decorated soccer star on the planet doesn’t hide much.

Most followers utilize their iPhone fitness apps to follow Ronaldo’s fitness plan. Let’s dive into how Ronaldo stays in shape.

It should come as no surprise that he endures an extremely disciplined nutrition and fitness program when Ronaldo is training. At the gym, he switches between cardio and strength training workouts. Outside of the gym, his diet is maintained with persistent intervals during the day, supplying his varied protein shakes and vitamins.

In completion, the structure and discipline surrounding Ronaldo’s fitness plan and diet have assisted him in becoming one of the fittest athletes in the world, boasting a rock-solid physique is nearly as noticeable as his elite skills on the pitch.

Ronaldo’s move to the English Premier League has put Manchester United as one of the favorites to compete for the EPL title: check out EPL odds this season.

Ronaldo has collected a plethora of trophies, which includes success in multiple countries and domestic divisions. Four Champions League trophies, alongside countless player awards and a record-breaking international goal scoring tally for Portugal, can all give a little thanks to his player fitness.

Most men will wonder how a skinny teenager transformed himself into one of the planets most paramount athletes, and for those men, we have compiled a list of Ronaldo’s fitness checklist.

Including CR7’s workouts to his diet and nutrition, let’s preview the world’s most famous footballer’s impressive training routine.

Portuguese nationals know how to cook a good meal, and Ronaldo is no different when selecting his choice of foods. He upholds a mouth-watering and diverse diet, eating fruit, juices, steaks, eggs, bread, and an exceptional slice of cake or piece of chocolate. Ronaldo’s favorite meal is Bacalhau a Bras, and it consists of salted cod, sliced potatoes, onions, black olives, and parsley garnished scrambled eggs. The Portuguese know how to eat well.

Don’t be fooled by his boundless appetite; the Portuguese international and newly appointed Manchester United signing is strict on his diet, mainly when training. He’s known to split his daily food intake into several small meals, which he devours between 2–4-hour intervals. This method sustains an optimal rate of metabolism and avoids hunger or body weakness during the day.

Maintaining strength requires a significant amount of protein, and because Ronaldo is a lover of season, lean meats, steak and eggs, he intakes a tremendous amount. Including protein shakes and supplements, these also assist with muscle recovery after enduring a high-level workout or football match. Alternative recovery options include large quantities of fruit and vegetables; multi-vitamins and specialty sports drinks help with this. Of course, Ronaldo likes to avoid sugar and alcohol during the season, but he can be found indulging on his Instagram feed in his downtime.

Like most of us, Ronaldo is a bona fide lover of food, but he alternates his diet and nutrition depending on his career demands. Because of this, meal plans can become extensive and diverse in consonance with assorted factors.

The man himself lets it be known, “mix it up”, regarding training, and his fitness regimen is suitably persevered. Consisting of warm-up procedures, cardio, weight lifting, and football practice, it makes use of those calories and keeps him in tip-top physical shape. Just ask the ladies who fixate on the incredible structure.

“Learn to train your mind as well as your body,” and “Mental strength is just as important as physical strength and will help you achieve your goals.” A pair of quotes from Ronaldo relates to the understanding that remaining fit and healthy stems beyond a physical regime. Combine these factors with plenty of sleep, and you’ll stay strong in your attempts at emulating CR7.

In training, Ronaldo completes technical drills, intensified cardio sessions, and leg exercises that simultaneously keep him accurate on the pitch. Inside the gym, more cardio, weight training, and ab workouts continue a trend. Apparently, Ronaldo trains for 3-4 hours, five days per week, aiming at different muscle groups for each day.

Everyone reading this isn’t an aspiring footballer, so technical football drills and training can be removed from the equation. But focusing on Ronaldo’s universal workouts like weight training, ab workouts, leg exercises, and warm-up routines can give you a glimpse of how his elite level of fitness has been obtained. Follow a handful of these steps, and you can own a six-pack with Hercules-like hamstrings.

How To Become A Fitness Professional: Useful Tips

4 Tips for Creating the Perfect Space for Exercise

How Fitness and Success Come Hand-in-Hand

One Hour Each Morning for the Remaining 23

A NEW KIND OF REVOLUTION ... UEVOLUTION