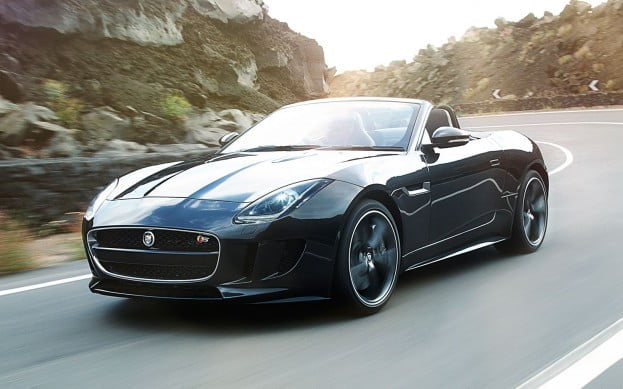 On a spectacular Southern California day, a group of luxury automobile owners participated in a special Rusnak Jaguar Anaheim Hills event, racing sleek new cars around the picturesque roads of San Diego County’s Pauma Valley -- with no policemen in sight.

JAGUAR LAND ROVER ENCOURAGES ITS DEALERS NATIONWIDE TO HOLD AN ANNUAL CUSTOMER-ORIENTED DRIVING EVENT FOR EACH OF THEIR ICONIC BRANDS – and Sven Larson thought the dazzling new 2014 Jaguar F-Type sports car was the perfect vehicle to showcase at such an event.

Larson, the General Manager of Jaguar Land Rover Anaheim Hills, wanted to do something that was completely different, unique and creative – “something that would not only give our clients a truly memorable experience, but represent the Jaguar brand well along with the Rusnak brand,” he says, referring to the legendary Southern California Rusnak Auto Group that has 15 luxury-brand dealerships, including Jaguar Land Rover Anaheim Hills.

Initially, Larson was at a loss for ideas, which is unusual for him.

“I was having a terrible time trying to think of something special to do – something out of the ordinary.”

Then, out of the blue one day, he had an epiphany.

“It was like a light bulb went off in my head,” he says.

That light bulb was a vision of the spectacular Pauma Valley Country Club in San Diego County, where he had once been invited to fly in to its private air strip in his Beechcraft Baron plane.

“I remembered how magnificent and gorgeous it is,” he says. 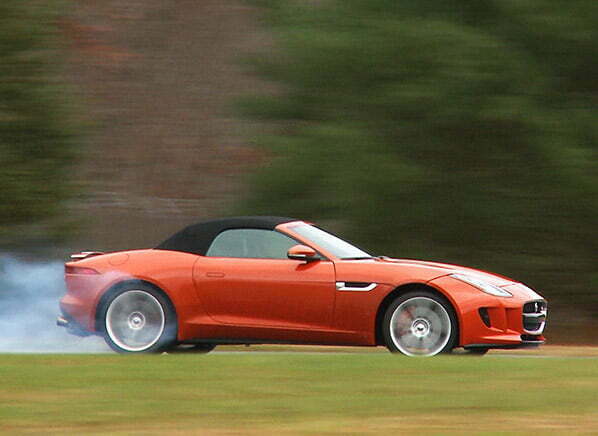 He also knew how ideal the Pauma Valley roads would be for experiencing Jaguars.

“I immediately thought, ‘This is a great fit,’” he recalls. “The demographics of the Jaguar driver and our guests are virtually identical. Jaguar owners are the exact type of people we want to attract – upscale, active, high-income people who like golf, weekend resorts and fine dining.”

Plus, as Vlahos points out, “there isn’t a better place to test drive Jaguars than on these roads.”

The affair turned out to be a colossal success – a select group of luxury automobile owners participated, driving sleek new Jaguars, Porsches and other luxury vehicles around the picturesque windy roads of Pauma Valley … with no policemen in sight.

Larson knew it was going to be a memorable day right from the outset. His striking 2014 black Range Rover Evoque was sitting in the club parking lot when he noticed a woman with her nose pressed up against the driver’s side passenger window.

He walked toward his car and introduced himself. The woman said she was enamored with his car and was interested in possibly purchasing one. Larson invited the woman and her husband to take a ride.

And they committed to buying it right on the spot.

“I was blown away,” Larson says. “It was a completely unexpected and pleasant surprise.”

The entire day unfolded just as beautifully as the weather – a rainy forecast turning into a breathtaking sunny Southern California day — perfect for running Jaguars through scenic, hilly, mountainous roads

Following a luscious lunch at Pauma Valley Country Club’s Palomar Room with a stunning golf course view of the majestic mountainside, Larson handed over the keys to seven 2014 and 2013 luxury Rusnak vehicles: a jet black Jaguar F-Type with 340 horsepower, a sleek silver Jaguar F-Type S with a supercharged V6 with 380 HP, a white Jaguar F-Type supercharged V8 S with 495 HP that quickly became nicknamed by the participants as “The Beast,” and a stunning satellite gray Jaguar XJ 3.0 four-door sedan.

For good measure – and to enable the participants to compare the spectacular ride and performance ability of the Jags — Larson brought in a Porsche 911 Cabrio, Porsche Cayman, Audi S5 Coupe and a convertible BMW 335i.

As soon as the keys were distributed, the participants jumped into their vehicles and sped away to the wide, open roads, leaving only dust and intrigue in the air.

“Listen to the loud, deep growl of this engine – it’s awesome,” marvels Dr. Shital Patel of Yorba Linda as he races up Palomar Mountain Road in the silver supercharged F-Type Jaguar. 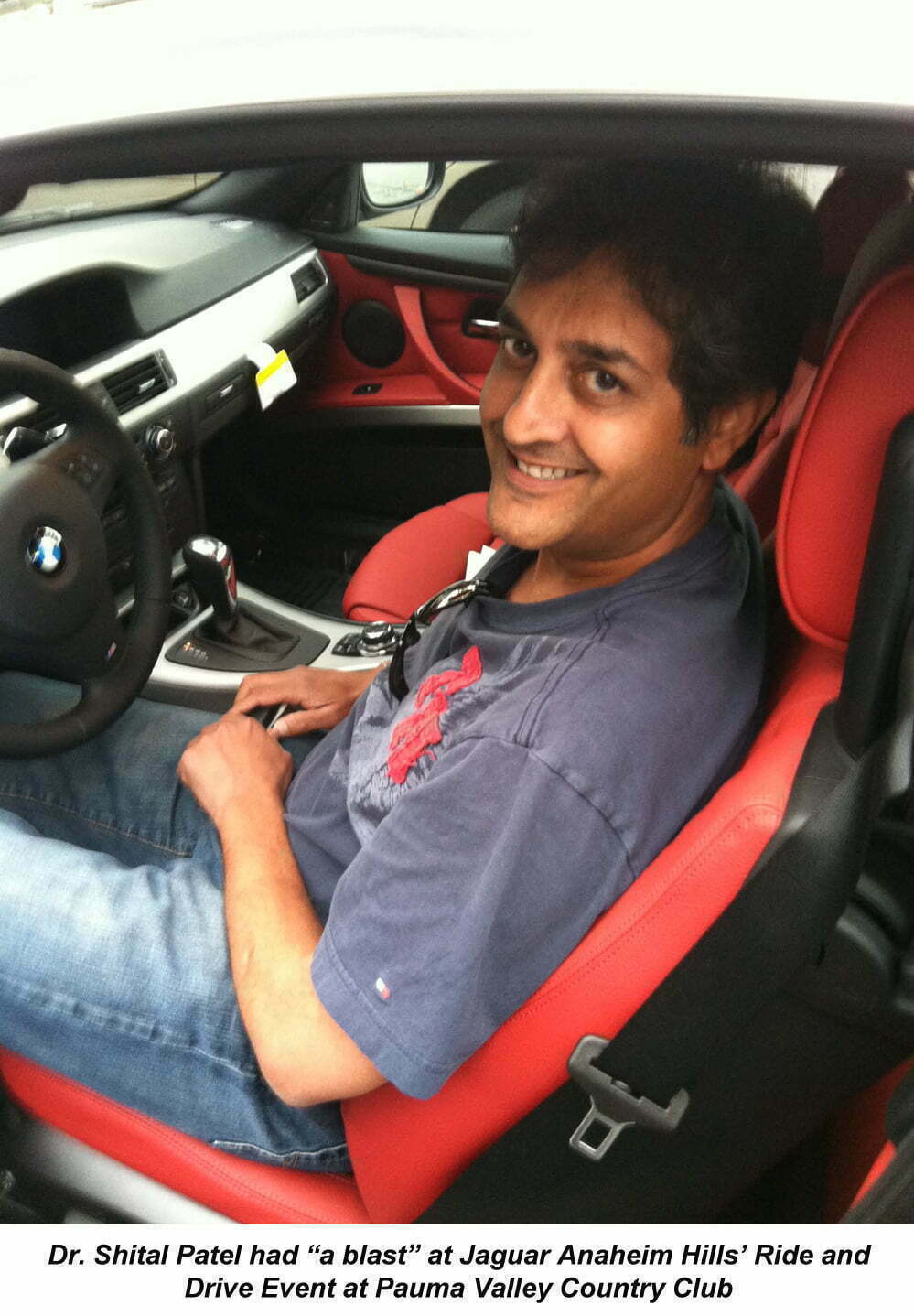 Patel was stunned when he first saw the new F-Type a few weeks earlier. He happened to be visiting a Mercedes dealership next door to Jaguar Land Rover Anaheim Hills when he spotted the dazzling new Jag.

“It was drop-dead gorgeous,” he says. “It may just be the best-looking Jaguar designed since the iconic E-Type.”

When he walked into the Jaguar dealership, he found out about the ride and drive event at Pauma Valley Country Club.

Burning around a picturesque bend with a stunning view of the mountains and vineyards, Dr. Patel opens the Jag up a bit. “I’m sold,” he says of the Big Cat’s performance.

Another participant, Daniel Morales, a Los Angeles banker, is sitting in the ferocious black Jaguar F-Type, sprinting up Cole Grade Road, right against the shadows of the boulder-strewn mountains.

“It’s like driving a Ferrari,” he says. “It responds so well – like nothing I’ve ever driven before. It’s a combination of thunder and lightning. This thing roars.”

Meanwhile, Morales’ wife, Cindy, is entranced by the sleek Jaguar XJ 3.0 four-door sedan. The luxuriant back seat is one of the car’s many extraordinary features and will be perfect for the couple’s two young children. 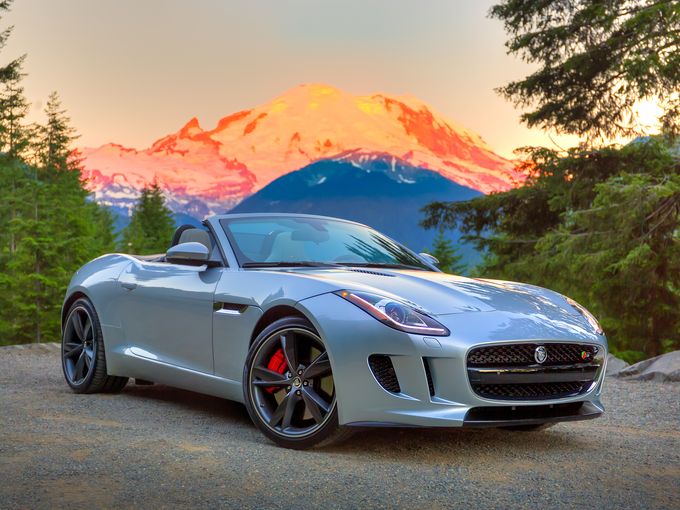 George Sapp, a Vice President at US Bank, was equally knocked over by the XJ, saying, “This is an awesome, sexy car. I’ve driven many high-end sedans and this is the best — the only one that compares to it is the Porsche Panamera.”

He points out the Jaguar XJ is comparable to the Mercedes S Class, “which may have a bigger engine, but this XJ has more than enough power,” he says. “It’s so smooth and quiet. The way it responds, wow — and inside, it has the traditional and elegant Jaguar feel. It has everything that Jaguar is known for.”

“I’d pick this car over BMW and Mercedes any day.”

The most talked about star of the day was “The Beast” – the lightning fast, sure-footed Jag F-Type S with 495 horsepower that hums a sweet eight-cylinder supercharged tune –although very loudly.

“It’s scary,” Sapp says of The Beast, which features a deep bark that could possibly drown out a Corvette Stingray or Maserati Gran Turismo. “This thing can sprint. It’s extraordinarily throaty – there’s a lot of sound to it. But it’s not overpowering the way it sounds. It didn’t shake at all and at 495 horses, that’s impressive.

He compared the vehicle to a ‘Vette in terms of power, but “this Jaguar has a better overall feel. This is a whole lot of car.”

A Cloud of Dust

As the sun begins to set behind the mountains, the participants are still whizzing around the charming Pauma Valley countryside. One after another, they speed away then race back to the country club, exchange keys and drive off again, leaving only the roar of the engine and clouds of dust behind. 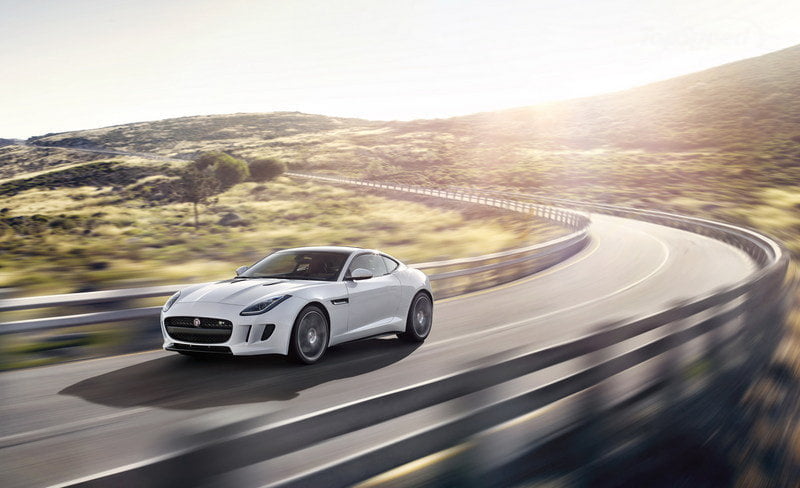 “A great day,” Larson says, beaming. “It could not have gone any better. We could not have asked for more. Whether our guests get a car from Jaguar Land Rover Anaheim Hills or not, our goal today was to get people to walk away from this event with a very positive feeling about Jaguar Anaheim Hills, the Rusnak Auto Group and the cars — and they did.”

“We wanted to ‘wow’ them by creating an atmosphere where they can test drive the cars, really open them up and experience them like they never have before.”

All the participants agreed that the event surpassed their expectations – along with the vehicles.

“Stupendous day,” says Derek Harvey, a Southern California therapist. “I was really surprised when I was invited – and I was truly excited to get the chance to test drive the three 2014 F-Types on the open road. It was a wonderful experience that I won’t forget anytime soon.” 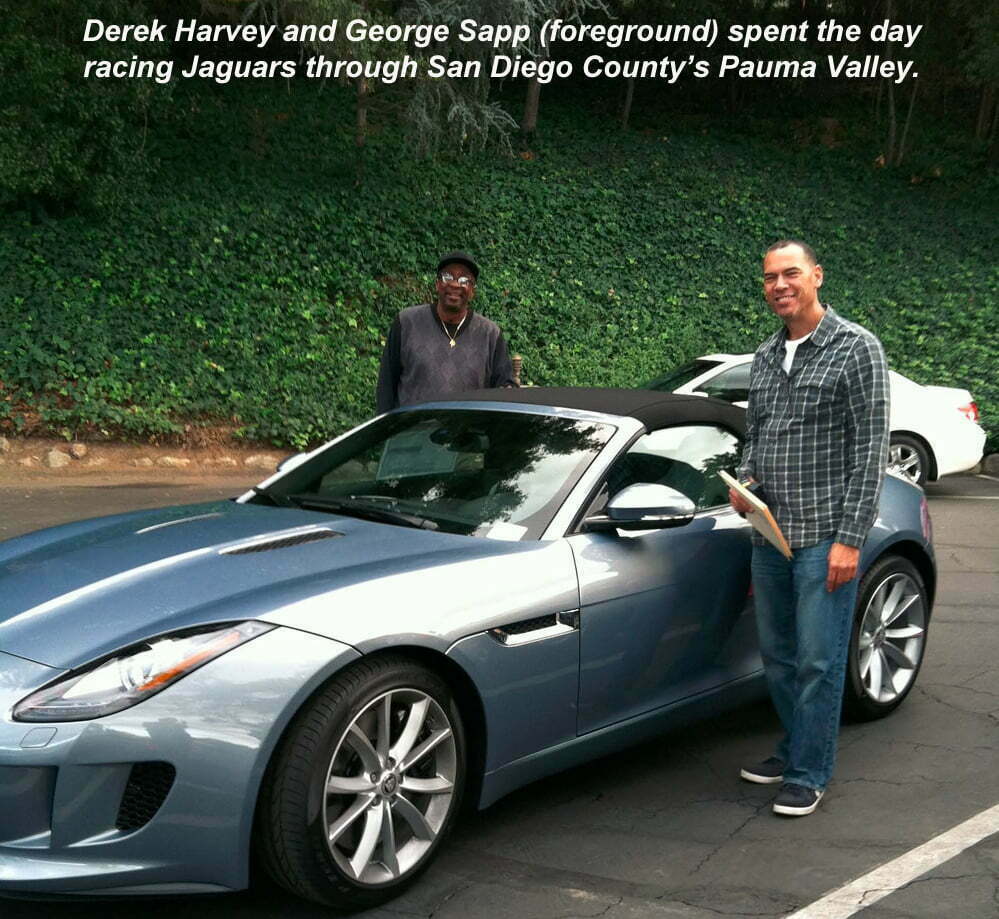 “It was almost too powerful for its body size,” he says. “When you hit it, you almost felt as if it was going to get from under you if you weren’t careful.”

As for the Jaguar XJ, Harvey says, “That’s a true luxury car — and it has quite a bit of ‘gitty up.’”

When Morales was asked what car he’d like to drive home with, he quickly responded, “Any of them. They’re all spectacular.”