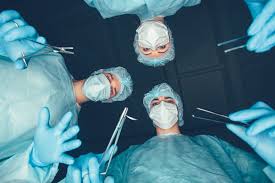 As a revered surgeon for 30+ years, Bill Dobkin has treated the most complex problems associated with the spine and has been involved in more than 15,000 surgeries involving the brain and spine, mostly at Hoag Hospital in Newport Beach, Calif.

As a businessman and entrepreneur, Dobkin is equally brilliant. He is the founder and creator of a new technology that is changing the medical field. The surgical software is known as ORHub – the “OR” standing for “operating room,” where Dobkin has spent more than half his life. 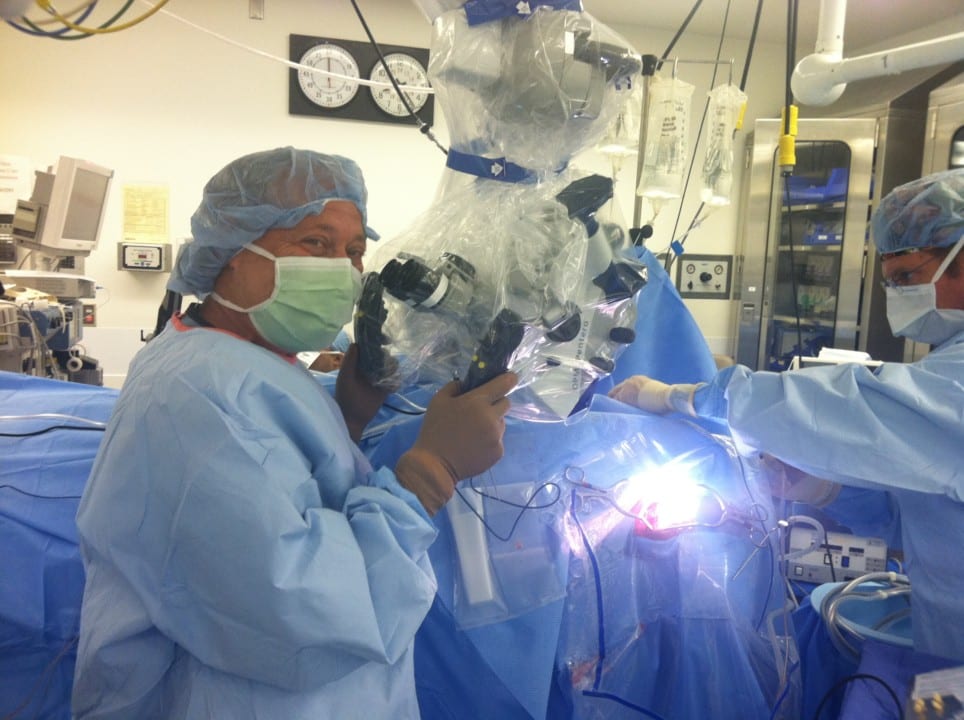 Dr. Bill Dobkin is the founder and creator of a new surgical software technology that is changing the medical field: ORHub

The technology is ultra-transformative and a genuine industry game-changer because it not only solves the huge financial problem that has crippled hospitals for more than a half century, but it impacts taxpayers as well, saving them – and the government – millions of dollars annually.

Equally important is that ORHub fuses every element of a surgical procedure with a hospital’s business operations by delivering real-time monitoring of surgery through intelligent insight into the operating room. At the same time, it helps medical professionals achieve better resource allocation, enabling them to make accurate, cost-effective financial decisions, along with predictive analysis to keep expenses at a fair and reasonable level.

Historically, as a surgical procedure begins, the operating room nurse begins to craft handwritten notes on every move and every action – and every product used — by the surgical team. This is where Dobkin’s innovation changed the industry and the OR – and elevated the entire process of patient care and the hospital’s business entity to a new level of efficiency.

“Hospitals have been using an archaic system for decades and decades,” Dobkin says at his Hoag Hospital office. “It’s ineffective. It’s inefficient. It doesn’t work. Someone needed to do something to fix this broken system.”

As difficult and disturbing as this is, one doctor could be spending 10 times more on a surgical procedure than another physician and he doesn’t even realize it, according to Dobkin. 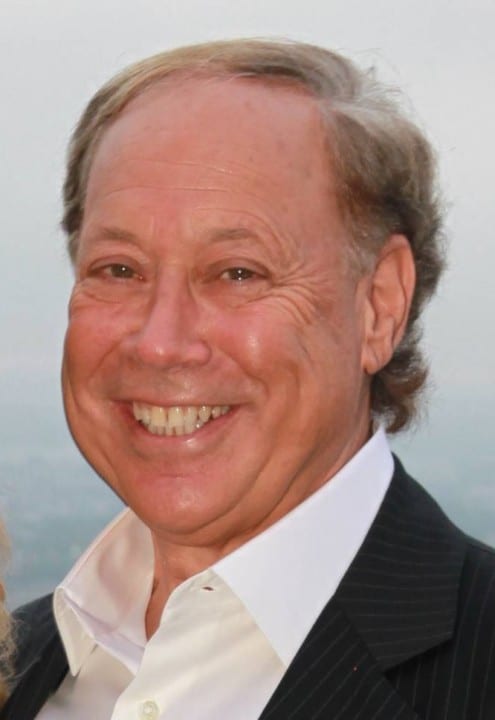 The finances of surgeries aren’t even seen and evaluated by the hospital’s upper management until several months after the fact so they do not have any comprehensive as how much they could have saved if they had a better and more economical system in place – a system that has now been ushered into the digital age by ORHub.

The software is so unique and effective that it can compensate medical product vendors from the operating room rather than the traditional 90- to 120-day time frame, thereby helping hospitals make accurate, cost-effective business and financial decisions.

Delivering surgical care to just a single patient is a very complex process – it takes nearly a half dozen companies and a dozen departments cooperating inside and outside the hospital. “What we’ve done is simplify and streamline the entire process by enabling surgeons, vendors and providers to collaborate on providing care in real time,” Dobkin says. “As a result, hospitals and surgeons can make smart, data-driven decisions to improve business profitability.”

This is first time in medical history that a technology of this nature has been used in the operating room to track every move and action by the medical team and tie it all back to the hospital’s business functions.

“Our software automatically translates a procedure into an intelligent electronic report that links every detail of surgery, including implant location, surgical techniques, product usage, and all clinical parameters to create a dynamically new source of comparative information,” says ORHub CEO Colt Melby.

“Our technology is the eyes and ears of the OR,” Melby says. “It is a complete digitization of the OR.”

Richard Lee, MD, an orthopedic surgeon at Hoag Orthopedic Institute, says, “We [doctors] desperately needed the ability to objectively compare treatment options with patient outcomes to determine the most effective method of managing a given diagnosis. Many hospitals across the nation still use pen and paper to track ordering, sterilizing, implants, and vendor invoicing. ORHub has brought the healthcare system advance into the digital age.”

The key in improving hospital costs without sacrificing quality of care is “understanding diagnosis, medical procedures, possible complications, operation materials and reimbursement,” Dobkin says. “ORHub enables doctors and other care providers at every stage of the surgical process to collaborate, organize, deliver, measure and reimburse.”

Whether it’s a one-hour procedure that requires a single tube of tissue sealant or a 10-hour surgery that necessitates 50 implants along a patient’s spine, ORHub creates an accurate record of the implants used, allowing surgical data collection and analysis at its highest and most efficient digital level. 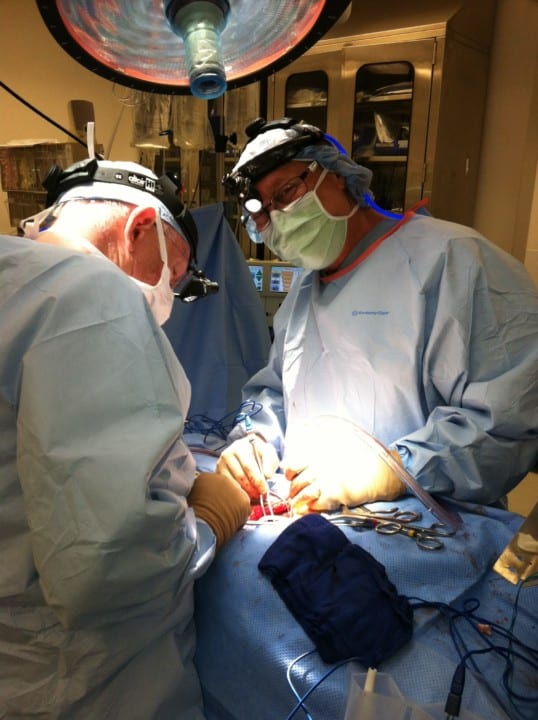 ORHub is a certified dream come true for the American health care system and individual hospitals, which are losing billions of dollars each year. Of the $3.8 trillion that health care makes up in the U.S. gross national product (GDP), reportedly one trillion of it is considered waste.

“ORHub will help our health care system get back $250 billion of that waste,” Melby says. “With costs rising every year due to an aging population and increasingly expensive treatments, providers are under a lot of pressure to become more efficient and reduce costs. The world has to face it: these are very turbulent economic times facing hospitals.”

Hoag Hospital and Hoag Orthopedic Institute in Irvine, Calif. are the first medical institutions to utilize ORHub. Hoag saved $462,000 in 2017 alone with ORHub, simply by consolidating its product list and by tracking surgeries to make sure its doctors are mirroring each other’s cost-effective operations, particularly with the use of medical products like implants.

Now with ORHub every other hospital in the world can see and understand a 360-degree view of every action taken in the OR to treat a patient for a condition — and the predictive outcome that resulted from it. It eliminates inefficiencies, duplications of effort, and errors and omissions that result from “siloed hospital processes in outdated software and poor handoffs from one part of the care process to another,” Dobkin says.

ORHub operates on Microsoft’s Azure cloud platform. Microsoft is a partner in the development of ORHub and has a team of engineers, programmers and developers handling the process in its Bellevue, Washington headquarters.

When Microsoft Venture Capitalist Jim Brisimitzis heard what Dobkin had created, he immediately reached out, knowing how much of a transformative technology it was. Shortly thereafter, Microsoft was ‘all in.’

Dobkin glances out of his huge office window at Hoag Hospital with a gorgeous view of the Newport Beach coastline.

“It’s amazing – hospitals are trying to run these multi-billion dollar businesses and they had no idea what is going on in the OR, the cardiac labs or radiology,” he says. “The hospital doesn’t know what occurs so they have no way of analyzing and comparing if they’re doing a bad job or a cost-efficient job. They simply have no idea. Now they do.”

Melby anticipates signing up more than 100 hospitals by the end of 2018 “and thousands more after that,” he says.

When it comes to an authentic game-changing technology, ORHub is the definitive example of what that means. It is altering the medical field in the same way Amazon changed purchasing and delivery.

“I always wanted to do something great,” Dobkin says with a shy smile. “I always liked being the hero. As a kid, I couldn’t dunk, hit 400 foot home runs or throw a football 70 yards, so I had to do something else. As a neurosurgeon, I got to be the hero and save people’s lives.

“Medicine is great but it’s so ineffective and expensive from the business side,” he adds. “The doctors’ excuse was always ‘don’t worry about money, we’re saving someone’s life.’ But it’s not realistic in the way you run a business. It’s just not cost effective. Fortunately, I found a way to change that.”

And be a hero once again. 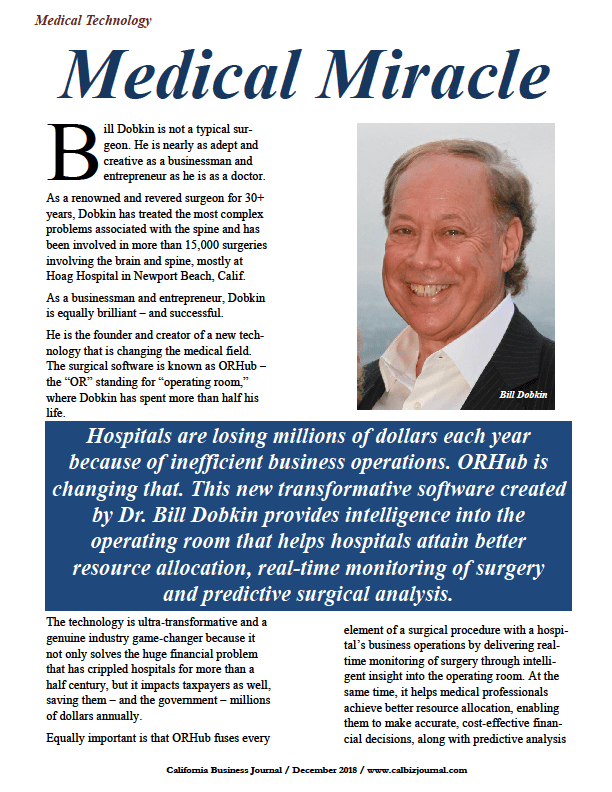 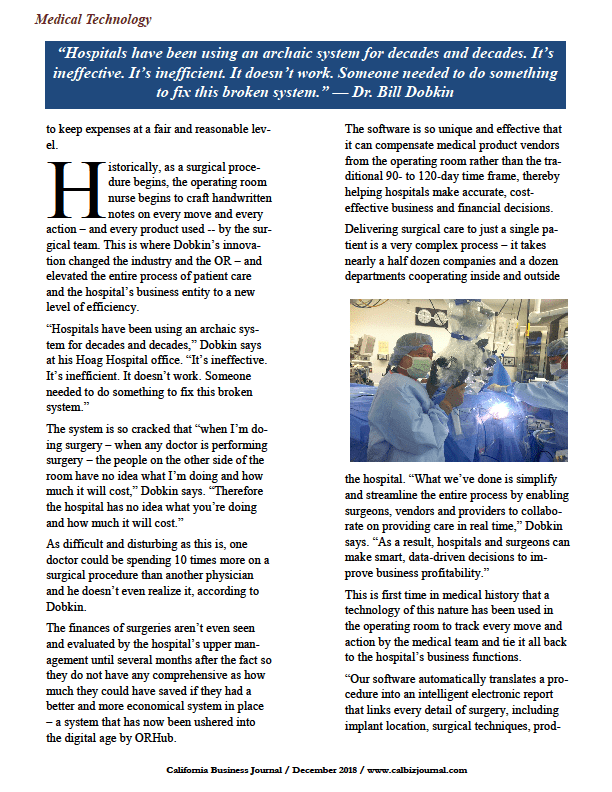 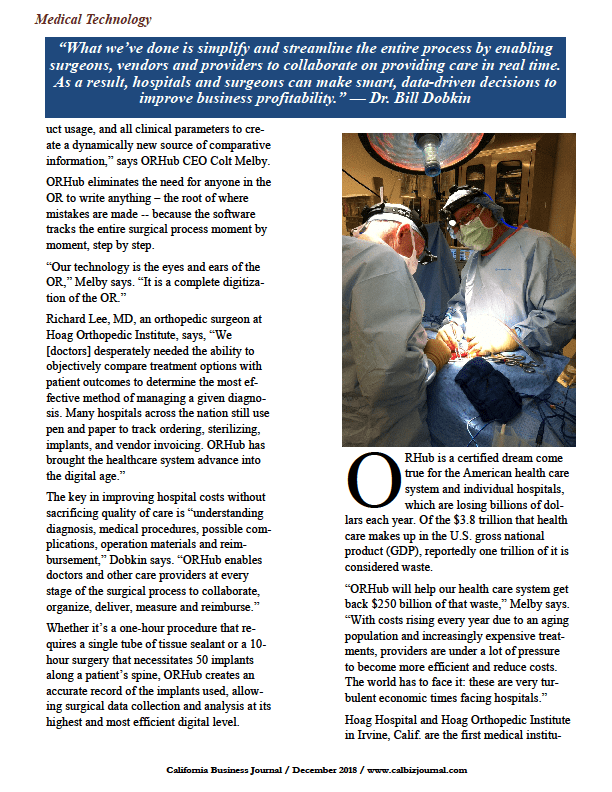 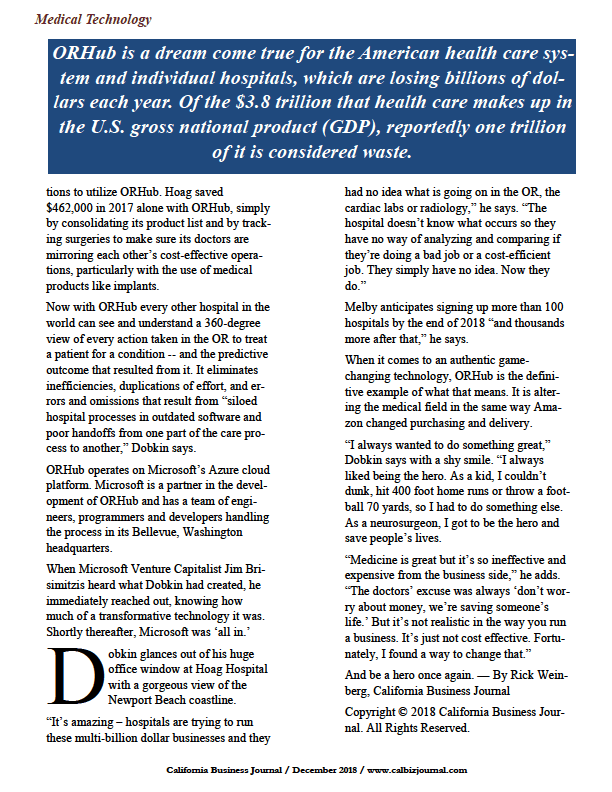