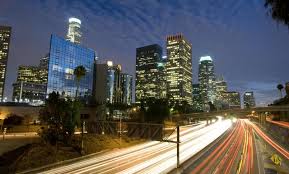 Los Angeles County is a leading real estate market in multifamily residential and commercial construction as downtown and other previously underserved areas are revitalized. Steve Basham, senior market analyst for CoStar Group Inc., looks at the state of the L.A. market and where it is headed.

With a population of more than 10 million and stretching from the world-class harbor facilities of Long Beach and San Pedro to the desert communities of the Antelope Valley, Los Angeles County is a behemoth in the national – and global – real estate industry, ranking third in the U.S. behind New York City and Washington, D.C. The county is consistently named the premier market for international real estate investors in North America.

“The drivers for Los Angeles are the geographical size and population, the broad and diverse economy, and the young and internationally diverse population with a wide-range of skill types. Los Angeles does not have a dependency on one sector of the economy, as is the case in other markets such as Seattle or Washington, D.C.,” says Steve Basham, senior market analyst for CoStar Group Inc., a leader in American commercial real estate data and research that has invested more than $1 billion in related research and monitoring, including extensive recent study of the Los Angeles region.

Despite widespread interest in L.A. real estate, Basham says that a lack of developable land, supply constraints, regulations and community opposition combine to make new construction challenging in the City of Angels.

“It is relatively difficult to get new projects built in Los Angeles compared to other parts of the country,” he says. “But this also means that those who invest in commercial real estate know that they will not get a high level of competition from new things being built in the city.”

Downtown Los Angeles has experienced a major renaissance in recent years as upscale apartments, condos, corporate offices, shopping, dining and entertainment venues have returned to the heart of the nation’s second-largest city. Today, the area is one of the top five apartment construction markets in the U.S.

Basham sees this revitalization as following an opposite trajectory to development in other communities.

“Many times, residential builders will follow the jobs, where new offices are being built,” he says. “But in downtown L.A., the reputation as a cool place to live started to grow, which triggered apartment and multifamily housing development, which has brought younger, upscale, well-educated people. This has made employers and office developers look at downtown differently.”

International investors have been at the forefront of the downtown L.A. expansion and renewal. Cho Yang-ho, CEO and chairman of Korean Air, revived the Wilshire Grand Tower. China-based Oceanwide Holdings is responsible for the mixed-use Oceanwide Plaza and Ocean Metropolis near the Staples Center. The Canadian Omni Group has constructed several major downtown residential towers.

“Collectively, these companies have reinvented the L.A. skyline with the size and scope of their projects. If you are fortunate and deep-pocketed enough to build into L.A., you know that you’ll be somewhat insulated from economic shocks that might hit smaller, less-diversified markets,” Basham says.

As a prime example of revitalization, Basham touts the former Ford factory in the Arts District, which has been transformed into creative office space. In 2016, Warner Bros. Entertainment Group moved its headquarters from Burbank to this site in that year’s largest lease citywide.

“The conversion of older, obsolete industrial facilities to modern, attractive, creative offices with upscale amenities that attract high-end tenants has been a major driving factor in the office market this cycle,” he says.

Due to the influx of new supply, apartment rents have declined slightly downtown, though Basham sees the long-term prospects as positive, as leases and overall interest in the area continues to increase.

In addition to downtown L.A., a number of other areas, including Hollywood, Playa Vista, Glendale, Pasadena and Woodland Hills, are seeing increased construction. In many cases, Silicon Valley tech companies are taking advantage of the entertainment and production expertise in the L.A. region to locate their content and marketing operations there.

While Los Angeles County retains an allure that has fueled its economy for more than a century, the population is not growing nearly as quickly as in other areas of the Golden State.

“There are a lot of people moving out of Los Angeles every year, though it is a popular area for international migration. Combined with natural increase, it is enough to keep the population growing slowly,” Basham says, noting that other areas, including the Inland Empire, Orange County and San Diego County, have seen higher growth rates. Within L.A. County, the far eastern communities in the Pomona and San Gabriel Valleys are seeing the most rapid population growth.

Basham notes that earlier in this business cycle, apartment rents were growing at 6% annually in Los Angeles County, but the increase declined to about 3% in 2017, which is part of a broader national trend. Any rent hikes bring discussions of affordable housing to the forefront as some parts of the Los Angeles market, such as Beverly Hills and Santa Monica, have among the highest rents in the country. One of the most expensive properties in CoStar’s database is Ten Thousand in Century City, where the penthouse unit reportedly leases for a stratospheric $65,000 per month.

“The underlying dynamics of strong demand, a healthy economy and the inability to build enough housing to keep up with demand should keep rents going up, albeit slower than previously,” he says.

Affordable housing is a major issue in the 2018 gubernatorial election cycle. Democratic hopeful Antonio Villaraigosa, who served as Los Angeles mayor from 2005 to 2013, is touting smaller infill developments, as opposed to the sprawling tract homes of the suburbs as a solution to high housing costs, as well as facilitating more reasonable commutes and sustainable communities.

“Accelerated building near transit stops could be a key piece of the puzzle in alleviating the ongoing housing crunch in Southern California,” Basham says.

With that in mind, central but underutilized areas such as South Los Angeles are likely to be future growth areas, due to a prime location near employment magnets and transit lines. Basham notes that Inglewood, once a byword for crime and blight, posted one of the strongest rent growths of any submarket in the county in 2017.

“With the right catalyst and willpower, and enough resources, anywhere in L.A. that is not dense and built-up has a lot of potential.” 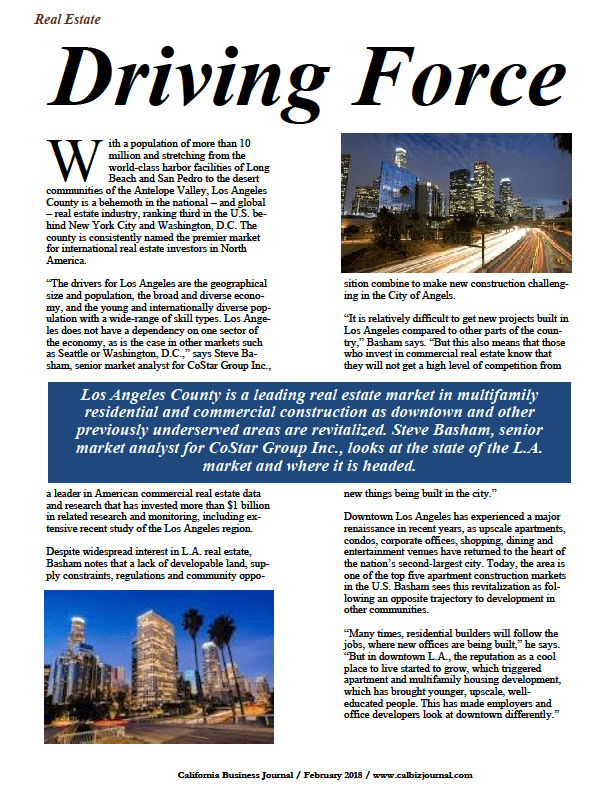