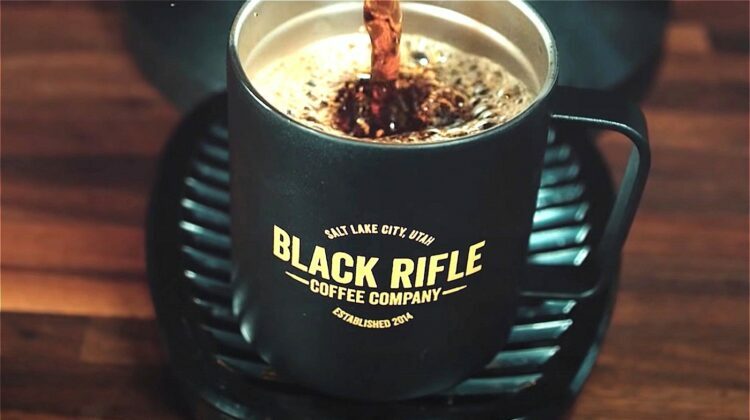 Black Rifle Coffee Company (BRCC) founder Evan Hafer, a the former Green Beret, began by selling his “Freedom Roast” coffee through a friend’s clothing website in 2014, but quickly spun out to its own business with physical locations in Utah, Georgia, and Texas – plus distribution and firing ranges and other outdoor good outlets.

Their brand is wonderfully anti-woke, with “controversial” social media posts about military humor, gun culture, and hipsterism. In 2017, Black Rifle gained national attention when it pledged to hire 10,000 veterans in response to Starbucks’ pledge to hire 10,000 refugees. In 2018, Black Rifle’s revenue was $30 million. In late 2021, the coffee company announced it was joining with SilverBox Engaged Merger Corporation in a combined valuation of $1.7 billion before going public in February.

[Editor’s note: CBJ is in the process of seeking a donation from BRCC to help combat school shootings.]

… but they’re hardly alone in the present climate. If a dip in stock value right now – given the inflation, skyrocketing oil prices, and political instability – is a crime, then everyone in every equity market has to turn themselves in.

So investors have to wonder: is this a legitimate lawsuit, an attempt to a short the stock through legal shenanigans, or merely class-action greed?

To help answer, we need to look at who’s behind the suit: Jonathan Wallentine of 1791 Management Company.

He filed his lawsuit on the grounds that BRCC has committed “intentional violations of securities laws and fraud, including deliberate breach of contract, breach of fiduciary duty, and negligent misrepresentation.”

A website created to sow doubts in Wallentine’s credibility, accuses Wallentine of using a now-defunct law firm called Hittleman Strunk to solicit litigants against the coffee company. The law firm previously represented Wallentine’s ex-wife during divorce proceedings, and – undermining his credibility – Wallentine himself has a history of getting sued for fraud.

Merger objection class-action lawsuits have been a scourge on US public companies for years. From 2009 through 2015, about somewhere between 90 percent of all mergers valued at more than $100 million were challenged by at least one shareholder class-action lawsuit, according to consulting firm Cornerstone Research.

As outlined in Patrick Gallagher’s “The Uphill Battle to Take Down the ‘Merger Tax,’” these suits claim that the target company’s disclosures were not adequate, the directors breached their fiduciary duty, and failed to get the best price. Because few corporate defendants want to risk derailing a transaction, the majority of these suits result in quick “disclosure-only” settlements that help law firms – who can pull in $500,000 for this kind of drive-by lawsuit – but rarely provide compensation to shareholders.

The aptly named Professor John Coffee summarized this a few years ago when he wrote, “Class actions and other representative actions . . . are largely lawyer financed, lawyer controlled, and lawyer settled, subject to generally weak client control and only modest oversight by courts.”

The incentive in such cases is to settle, where “neither side loses anything, and both recoup their legal expenses from the corporation (and thus indirectly from the shareholders),” he continued.

Meaning the only person hurting the shareholders of BRCC are the people behind this frivolous lawsuit. Judges need to dismiss “merger tax” lawsuits out of hand, and Congress needs to enact punitive measures so they disappear entirely. Then the people generating the real business success in the America can safely stay, pardon the expression, in the black.

The views, opinions and thoughts expressed here are those of the authors and do not necessarily reflect the views or position of the publication.

Commentary: The Brewing Battle Between Pro Golfers and the PGA Tour

If you're going to use a fireman, learn how to do it the right way, the safe way -- for protection and sport only.
Tags: AmericaAmericanbestBlack Rifle Coffee CompanybrandcompanyCorporationdivorceequityEvan HaferfiduciaryfirminvestorsJohnlawlaw firmlaw firmslawsuitslawyerlegaloilrevenuesuccess storytargetTexasvalue
ADVERTISEMENT

If you're going to use a fireman, learn how to do it the right way, the safe way -- for protection and sport only.

Commentary: The Brewing Battle Between Pro Golfers and the PGA Tour