Jeremy Stephan has linked technology companies around the globe with U.S. clients for more than a decade and carved out a particular specialization in Brazil, where he led two tech firms to drum up business stateside.

In May, Stephan joined Cheesecake Labs, a top tier Brazilian-based software design and engineering company developing mobile and web apps, as head of client engagement for North America, where he helps startups and corporations boost their digital operations.

“It’s really about extracting client goals and defining business requirements, and aligning how Cheesecake Labs can provide support to them on its journey,” says Stephan, who typically logs more than five meetings a day from his Los Angeles home with prospective and existing clients.

The firm, which employs its entire team of 100+ designers and developers in the southern coastal town of Florianópolis, has roughly 30 clients with projects in the pipeline.

Smart lock maker Lockitron, before its sale last year to Chamberlain Group, worked with Cheesecake to build and scale its flagship product for Android, iOS and the wearable device market.

Stephan’s journey into tech began 11 years ago after he shuttered his Los Angeles promotion and marketing agency, which linked brands such as Zippo, Coca-Cola and Cingular Wireless, with concert and tour sponsorships and other consumer activations. He needed a break from eight years of concert promotions, tour schedules and late nights.

“I needed to move on to the next stage,” says Stephan, who took two years off to explore Southeast Asia and Europe before moving to the Bay Area. He settled in Sausalito, a picturesque town on the other side of the Golden Gate Bridge, known for its hiking trails and other outdoor activities, big attractions for Stephan, an avid adventurer who enjoys free diving, sailing, and snow and paddle boarding.

It wasn’t long before he hooked up with ArcTouch, a Brazilian startup trying to capture business and momentum in the emerging app space. Stephan was employee No. 5, hired to foster business with U.S. customers. He helped grow the company’s revenue from $500,000 to $16 million, securing big name customers such as The Walt Disney Co., NBC and AstraZeneca, the pharmaceutical giant vying to bring a coronavirus vaccine to market.

ArcTouch, like Cheesecake Labs, was based in Florianópolis and its core business was app, and mobile web design and development. Brazil, one of the world’s 10 largest economies, has favorable currency exchange rates, runs on the same time zone as the West Coast, a warm passionate culture and English is its second language.

Florianópolis, similar to Venice Beach, has fused its beach community and destination culture with a hub of high-tech companies and research universities, developing a deep bench of engineering and design talent along the way.

ArcTouch was acquired in 2016 by the Grey Group, a global marketing communications firm owned by WPP. During his last year at ArcTouch, Stephan started angel investing, backing 15 U.S. startups with a concentration of B2B service providers.

Before joining Cheesecake, Stephan served in an interim executive position at one of his backed companies, and consulted international firms looking to establish or build operations stateside. He has seen a big change this year among founders, who had primarily been driven by ego, peer acceptance and competition.

This year, which has been dominated by the pandemic and the vast changes it has ushered in our personal and professional lives, has led to some profound shifts in the workplace. “There’s more care and concern,” he says. “You have to be concerned with the work-life balance. You have to think about things differently and what matters most.”

Cheesecake Labs and Stephan are putting his suggestions to the test. He’s handling this interview from his remote working post in Kailua-Kona, the Big Island in Hawaii renowned for its free diving community, a world away from the record Covid-19 infections and hospitalizations plaguing greater Los Angeles.

“I start working at 6 a.m. and I’m done by 2 p.m. Then I go out for a mile swim every day, or go to the bay and do free diving,” he says. “This is what’s keeping me healthy and active, and gives me a good work-life balance.” 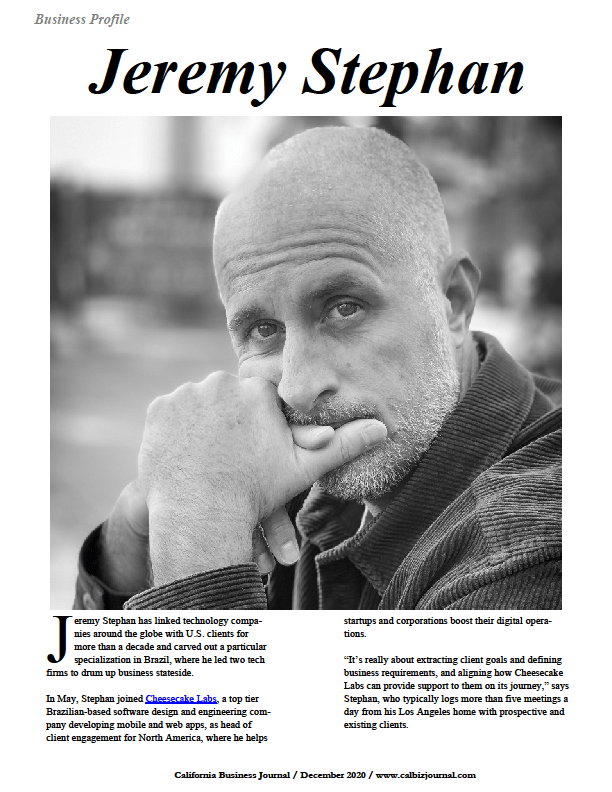 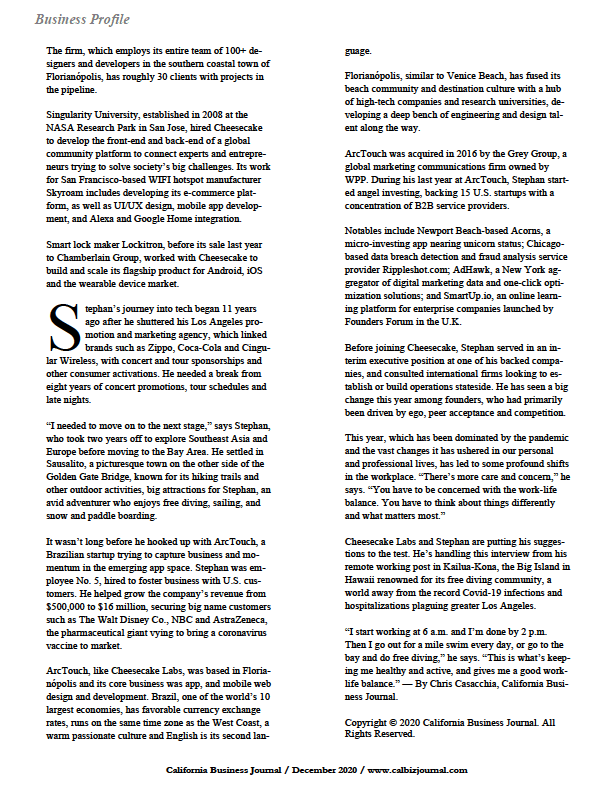