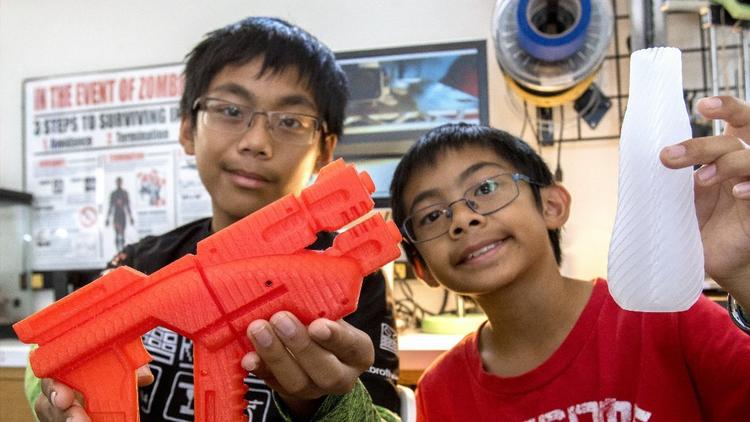 Calramon and Calexis Mabalot manufacture specialty products for an international market through their business Brother Robot.

On a recent afternoon Calramon Mabalot, 10, and his brother, Calexis, 12, tinkered with an orange toy gun and a plastic watch in their family’s Escondido home. Their 3-D printer hummed in the background, as it does round the clock, producing everything from key fobs and video game props to functional prosthetic limbs.

Through their business, Brother Robot, the boys manufacture specialty products for an international market. And recently they started building cutting-edge prosthetic hands.

Calramon, a fifth-grader at Reidy Creek School, is the engineer, who built the 3-D printer and handles the mechanical tasks. Calexis, in eighth grade at Rincon Middle School, is the computer guy, who does the digital design for their projects.

The brothers showed a talent for technology at an early age, said their father, Carlos Mabalot. Calramon started flying drones at age 5, and Calexis taught himself to use a computer at the same age, then learned programming and coding in sixth grade.

They got the 3-D printing bug two years ago after watching the Disney movie “Big Hero 6,” in which the characters printed a suit of armor.

Together, they pooled their birthday money — more than $600 — and purchased a kit for the printer. Calramon, then 8, assembled it on his own, customizing it with a bigger heated bed and industrial quality “hot end” — the part that melts and dispenses the plastic filament.

“It was pretty hard,” he said, as if describing a new Lego set. “It was like a puzzle.”

Although he sometimes got frustrated, he stayed focused on the task, his father said.

“He was absolutely meticulous in doing this,” said Mabalot, who works as a platform engineer for Daybreak Game Company, formerly Sony Online Entertainment, in San Diego. “He did this whole thing himself, putting it together in four days.”

The boys then started experimenting, scanning subjects, and reproducing them in plastic. One of their first projects was a chess set featuring them and their cousins posing with Nerf guns.

Once they got the hang of it, the pair formed Brother Robot. Mabalot, who describes himself as their chauffeur and project manager, helped them set up the company’s website and drove them to downtown San Diego, where the boys filled out the paperwork to establish their business.

They began marketing their products through the website 3DHubs, which connects customers with 3-D printing services. The orders started flowing in and the brothers fill them between homework, music and martial arts lessons.

Calramon has earned enough that he was able to buy a fleet of quadcopters, which he races competitively. He has also used his 3-D printer to build his own parts for his drone army.

Some of the boys’ biggest projects, however, are volunteer jobs. This summer they began visiting the innovation lab at the downtown San Diego library to hone their skills and pick up new ones, such as laser-cutting.

They were working in a group focused on making hand reproductions when they met Nick Sissakis, a library visitor who was born without his right hand.The librarian challenged the brothers to help make a prosthetic for Sissakis that not only matched the form of his left hand, but also mimicked its function.

They scanned Sissakis’ left hand and then built him an equivalent one, equipped with tension wires that allowed the hand to flex and grip in response to his muscles.

“It almost exactly matched his right hand, which created a prosthetic hand from a 9-year-old,” Calexis said.

Virginia music teacher Bette Gawinski had been seeking a prosthetic device for a viola student with a disability, and saw a news segment on the project. Immediately, she leaped out of her chair and onto her computer to contact the brothers.

The middle school music teacher and orchestra director hoped that 3-D printing could help her student, who was born with partially fused and shortened fingers on his right hand. Although he is passionate about music, the condition hinders his ability to properly grip a bow.

Calramon, who plays violin, and Calexis, a guitarist, were eager to help. They sent Gawinski their scanner to make a digital replica of the student’s hands. Once they receive the file, they will get to work on design and production.

On a Skype call last week, Calexis said the device, “would look like a hand but hook onto the bow.” It would be set in a flexed position to comfortably grip the bow, but could open when the student exerted his muscles.

“I’m just really happy that this is happening,” Gawinski said. “This little boy is such a good kid, and he wants to play the viola, and I want to help him do it.”

With early professional success under their belts, the brothers are thinking about their futures. They have very different visions.

“I want to be a pirate for the U.S. government,” said Calexis, who plans to earn a certificate from M.I.T which would establish his skills in pistol, archery, sailing, and fencing.