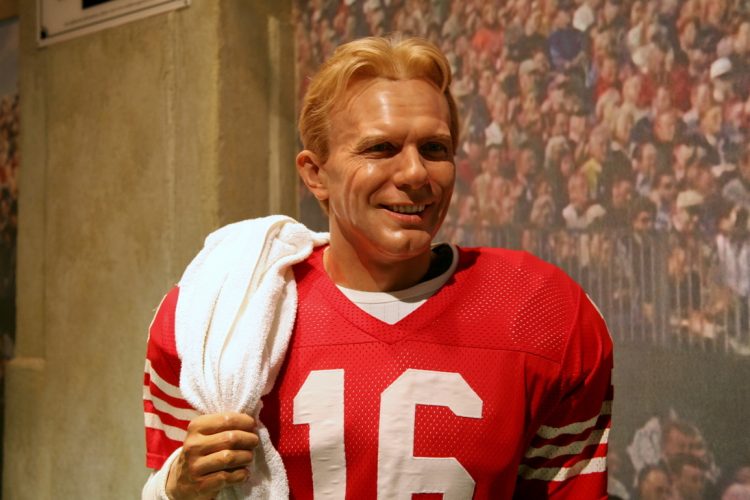 The debate is over: It's Tom Brady followed by John Elway. See the rest.

A top class quarterback can make a huge difference to an NFL team’s chances of success. This is why fans love to debate the names of the best players to ever star in this position. Who are the unforgettable quarterbacks who have most thrilled us with their displays? Here are the top five quarterbacks of all-time.

Is Brady the finest and most valuable quarterback we have ever seen? His stunning list of records suggests that this is the case. He has 7 Super Bowls, 3 NFL MVP awards, and 14 Pro Bowls among his list of achievements. All of this came after a solid but unspectacular college career at the University of Michigan led to him being under-valued at the 2000 draft.

He was chosen by the New England Patriots in the 6th round, as the 199th overall choice and the 7th quarterback. Yet, he would go on to spend 20 success-filled seasons at the Patriots, as his work ethic and game intelligence helped to establish him as arguably the finest quarterback the NFL has ever seen and a player that rivals find impossible to hate.

Elway had a remarkable career in pro football, spending all 16 years of it at the Denver Broncos after joining them in the 1983 draft. This came after a stand-out college career at Stanford, where he became an All-American. He then went on to compile a selection of records by the time he retired in 1999.

Among his records, he is the only quarterback to score rushing touchdowns in four separate Super Bowls. He also racked the highest number of victories by any starting quarterback. Perhaps his most memorable performance came in the 98-yard move, known as The Drive, that helped the Broncos win the 1987 AFC Championship.

For many people the greatest football player of all time, Montana started playing football at the age of 8 and was also a keen basketball player. He joined Notre Dame for his college career and showed early on the ability to perform in high-pressure situations and lead comebacks that would be his trademark later on.

Montana spent a total of 16 seasons in the NFL, 14 of them with the San Francisco 49ers. He won 4 Super Bowls and holds records such as being the only player to earn 3 Super Bowl MVPs, as well having the most Super Bowl passes without being intercepted. He is perhaps best remembered for The Catch, which helped the 49ers win the 1981 NFC Championship game against Dallas.

One of the names you’ll regularly see on the lists of all-time NFL greats, Unitas was known as Golden Arm and helped to introduce some of the modern ways of playing the all-important quarterback role. He starred for the University of Louisville, where he had to choose square dancing to stay at the college and continue his career, due to the sporting budget being cut.

The 1955 draft saw Unitas picked by the Pittsburgh Steelers, but it wasn’t until the 9th round that they chose him. Things soon got worse, as he was released by the Steelers, who felt that they had 3 better players in the position on their books. What followed was an incredible 18-year career in the NFL that saw Unitas named MVP 3 times and get into 10 Pro Bowls. Super Bowl V was his solitary success, with three championship victories coming before this.

Manning started his collect football career in controversial fashion, receiving a lot of criticism for choosing the University of Tennessee Volunteers. However, he went on to become their leading passer of all-time before becoming first overall pick for the Indianapolis Colts in the 1998 draft.

He spent 14 seasons with the Colts and is often credited with turning around their fortunes by leading them to 11 playoff runs and the Super Bowl XLI title. Manning then ended his NFL career with 4 seasons at the Denver Broncos, where he helped them to win the Super Bowl in his last season.