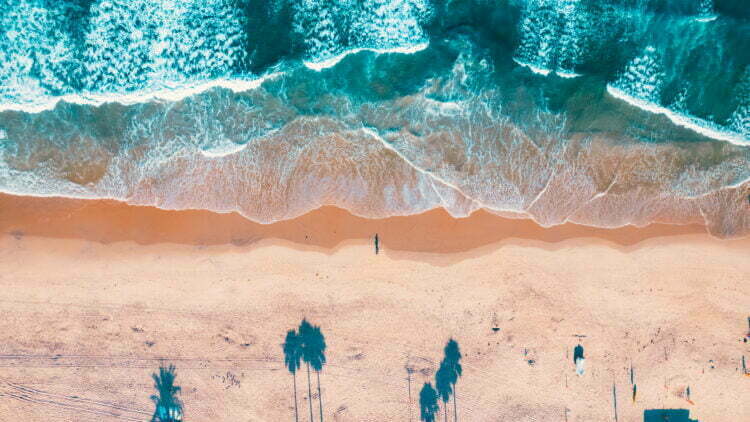 The 46-room hotel has a vintage ‘60s beach town feel where you can envision The Beach Boys playing on the sand in 1966 surrounded by Mustangs, Corvettes and Camaros.

When publicist Lindsay Brean invited California Business Journal to review the new Del Mar Beach Hotel, we went to the hotel’s website to scope it out.

When we learned it was the only hotel in Del Mar located right on beach sand, well, it took us all of two seconds to say, “Pack your bags.”

We trekked on down to Del Mar to experience the newly renovated hotel that was established in 1968 by one of the world’s most inspiring immigrant stories of all-time. More on that later. We were given the best room in the house with a view of the Pacific Ocean from the bed.

The 46-room hotel has a vintage ‘60s beach town feel where you can envision The Beach Boys playing on the sand in 1966 surrounded by Mustangs, Corvettes and Camaros. The hotel just completed the first of three phases that took 1 ½ years to complete.

“We took the hotel down to the two-by-fours,” says hotel General Manager Ryan White, who couldn’t pack fast enough himself when the hotel owners offered him the job. “You could see the ocean right through the walls. It was bare. Except for the studs.”

The hotel’s neighboring restaurant, Poseidon, was also established in 1968 by Ranglas. At the time, it was a burger joint, but Ranglas immediately saw the untapped potential and value of converting it into a fine dining restaurant with tables with an ocean view and almost touching the sand of the beach. Just like his hotel.

Day 1 was spent at Poseidon for lunch, ordering (1) the Seafood Platter Loch Etive salmon, Mahi-Mahi, diver scallops, jumbo shrimp, asparagus, peewee potatoes, and chimichurri sauce, and (2) Chimichurri marinated Filet Mignon with truffle fries and black garlic aioli. No alcoholic beverages were ordered. Just wanted to experience the food for itself without any other intake distractions. No dessert either. Why spoil an epic meal by stuffing yourself with the sweet stuff? Not us. Dessert can wait — for a few hours.

Anyway, back to the main dishes, created by World-Class Chef Mourad Jamal: Filet Mignon is seldom marinated in chimichurri sauce. Thank goodness Chef Jamal decided to do it his way – sweet and roasted peppers (red, yellow, orange), olive oil direct from Italy, parsley, garlic, onion — all charred and grilled with a tinge of a smokey flavor. The taste is unparalleled – and the quality of the highest-grade farm-to-table streak is nonpareil.

Jamal was already cooking as a young boy in Morocco. He later studied master classic French and Mediterranean cuisine techniques that he brought to Poseidon. His fusion style also incorporates flavor influences from Belgium, Mexico, the Caribbean, and the Netherlands.

“Everyone raves about his dishes but it’s also about his personality,” Poseidon General Manager Bobby Daitch says about his chef. “His personality is electrifying and magnetic. He brings a fire that permeates throughout the restaurant through his never-ending energy and ability to create incredible plates.”

While some top restaurants worldwide were forced to reduce the quality of their meats and fish because of the global supply-chain and delivery problems during Covid, Chef Jamal did not. “I refused to compromise our quality for a lower price,” he says.

Day 2 was dinner at Poseidon’s next-door neighbor, Jake’s, which also sits right on the beach with the same magical sunset ocean views.

Thank Master Chef Paul Niles for these. Niles, who previously worked at Robert DeNiro’s Tribeca Grill in Manhattan, enhanced Jake’s menu based on the ever-changing culinary trends. One of the dishes he created was Achiote Roasted Fish with Brazilian peppercorn, grains of three wheat classes, roasted tomatoes, shishito pepper, and roasted tomatillo vinaigrette. Hold your dropping jaw as you taste it.

“My style is mixing French cuisine with classic sauces and vinaigrette with a base of traditional sauces such as espagnole brown sauce intertwined with today’s trends,” he says. He also takes Baha cuisine and melds it with Polynesian and Indian cuisine mixed with French style techniques.

Niles’ Filet Mignon with burgundy sauce is his own creation. Calling it dazzling or spectacular doesn’t even do it justice. This dish makes you dream about it continuously – until you return to Jakes. Then, once you leave, the fantasy starts all over again.

“I like the idea of reducing sauces down and incorporating the fruitiness and complexity of the burgundy and adding the sweetness of a balsamic vinegar and red wine with shallots, thyme and peppercorn,” Niles says.

As said earlier, the recreation) of the Del Mar Beach Hotel and Poseidon is The Great American Story of Tom Ranglas, who was born in Greece. He survived war after war in the 1940s before finding his way to El Cajon, California.

First it was the inhuman and heartless Nazis arriving in Greece in 1940 “with tanks, motor cycles and trucks rolling down our streets,” Ranglas once said. “Our people died like flies from starvation. I watched them die. It was horrifying. The Germans shot us with little provocation.”

One day, a sweet and innocent little Jewish girl wearing a Star of David spotted Ranglas’ cross around his neck. She asked if she could have it – “she thought it would save her from the ruthless Germans,” Ranglas says. He handed it to the young girl, whose eyes sparkled with joy. “I’ve always felt that kindness came back to me,” Ranglas said.

After WWII, Britain stormed into Greece and Ranglas was ushered aboard a ship in the middle of the night to – get this – Egypt. He was placed in a camp. He soon returned to Greece and served in the army for two years, during which Greece fought its own Communist Party in the Greek Mountains. As Ranglas walked with his Bren rifle one day, he heard an explosion. “Three of my friends had stepped on a mine and were killed.”

After that war, Ranglas discovered he had an uncle in Spring Valley, California, right outside San Diego and headed to the U.S. His first job paid $1.47 per hour. Ranglas and his mother started a chicken farm in Ed Cajon and later sold it. They then turned that into their historic purchase of the little burger joint then the Del Mar Beach Hotel for $300,000.