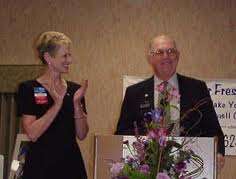 Ken Peterson is responsible for launching LeTip, the nation’s No. 1 networking group that has generated billions of dollars for thousands of members in hundreds of cities around the country. AS THE AIRPLANE ascended to 30,000 feet, Ken Peterson leaned back in his seat, breathing a sigh of relief following a three-day insurance seminar in Texas. He closed his eyes, but his mind was racing. He couldn’t stop thinking about his newest brainstorm idea: developing a nationwide business leads networking organization where businessmen and women could generate big dollars and build rock-solid, lifelong relationships. Such a group did not exist at the time—except in Peterson’s mind.

He was obsessed with the idea— and he knew he was the one who had to make it happen. He knew that this kind of networking group would have enormous impact on thousands of people. So, as Peterson’s mind ran rampant above the marshmallow clouds in the picturesque southwest blue skies, he began formulating his plan. He would begin assembling the most powerful networking group in the land, starting off in the city where he lived, San Diego, and gradually move north and then east.

This networking organization, he decided, would be formal, not informal, where anything goes. His vision was to establish a serious organization with rules, regulation and a sound structure. “Without that,” he said to himself, “it just won’t work.”

He knew a group with a serious culture and environment, and one that encourages a close family atmosphere, would flourish, generating millions of dollars for thousands of business professionals.

Peterson named his fledging networking group “Tipsters.” The year was 1978, and Peterson did just what he intended—create the nation’s largest and most prestigious networking group. The name of the organization was changed to LeTip International, which has since ballooned to 600 chapters nationally with more than 20,000 members who have generated billions of dollars for members in a variety of professional fields from financial planners and insurance agents to carpet cleaners and handymen.

Today, Peterson is regarded by many people as one of the nation’s most influential pioneers of the century. He is a genuine innovator, a person who changed the lives and fortunes of thousands of people.

“He gets letters and phone calls all the time from people thanking him for saving their lives and their business,” says Peterson’s wife, Jeannie, who quit her job to help Ken launch the networking group from a spare room in their home. “He’s very proud of what he has accomplished.”

He should be. He’s helped transform the lives of thousands of people, from hopeless to wealthy, from rock bottom to the top of the heap. Some people were on a financial deathbed, but it was Peterson who resurrected them, saving them from complete disaster. And he not only changed their financial situation, he also changed them personally, helping members overcome a fear of being able to speak in front of groups. He helped them become better, more influential people, in more ways than one.

Taking The Country By Storm

There were major struggles in the beginning. Ken and Jeannie had to literally pull people in off the streets to help create new chapters.

“But we kept plodding away,” Jeannie says. “We even had to take a second mortgage on our home to keep it going.”

After starting 15 chapters in the San Diego area, Peterson moved north to Orange County and Los Angeles. Then he took LeTip nationwide.

“Ken has done a lot of successful things in his career, but professionally, LeTip is by far the greatest joy of his life,” Jeannie says.

“You just can’t say enough about him,” says Pat Carney, president of LeTip International. “He’s impacted so many people, it’s hard to comprehend.” 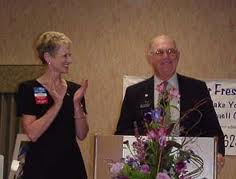 The structure and concept of LeTip is what enabled it to be the most successful networking organization in the world. Peterson created rules for members that had to be precisely followed: loyalty to other group members by using their services, and providing a minimum of two tips per month (the national average has since risen to two tips per week). Attendance is mandatory, he decided, and lame excuses aren’t easily accepted, resulting in fines.

Many of the fines are tongue in cheek. For instance, not shaking the hand of the “designated secret greeter or guest” is a $1 fine (the purpose is so everyone will shake everyone’s hand, enhancing relationships). Not bringing in a guest costs 25 cents. The “fines” are the humorous side of LeTip, a concept that Peterson created “to keep things loose.”

He designed programs and concepts like Showboating, where each week selected members display their products/services; and Lucky Devil, where a selected member performs a 30-second “commercial” of another member’s business.

Fun is fun, but when it comes to putting “dollars in your pockets,” which happens to be the name of a book Peterson wrote, LeTip has no peers. None whatsoever. Most chapters around the country generate more than $1 million gross in business a year. With 600 chapters, that’s $6 billion, over the last 20 years.

“It’s a miracle what Ken has done,” Jeannie Peterson says. “An absolute miracle.”

The stories that are told from New York to Los Angles are heartwarming and emotional. You hear tales of business people coming into a chapter without the ability to communicate, then emerging as the most popular and powerful people in the chapter. You hear stories of a marketing/advertising executive whose business was on the rocks joining the group and coming away with an account that wound up creating a cold medicine called Coldeze. That lead made it possible for the LeTip member, Robert Smith-Felver, to become a millionaire through stock options.

You also hear stories about a financial advisor who landed a $3 million account and a carpet cleaner who was offered $25,000 from a competitor for his LeTip membership. Then there’s the story of a chiropractor in an East Coast group who discovered through a series of tests the beginning of lung cancer of a LeTip member.

“That member’s life was saved by the chiropractor,” Carney says. “There are stories like that happening all over the country.”

And yet, in the beginning, there were people who doubted Peterson, people who never thought his networking plan would fly, people who actually thought Peterson was just reaching for air.

“But all you have to do is tell Ken that it won’t work and he’ll find a way to make it work,” Jeannie says with a laugh.

Peterson, who has five children with Jeannie, is personally responsible for launching more than 50% of the chapters himself, a near unprecedented business feat when you consider the amount of money involved.

“Creating LeTip in the structural fashion he did was a stroke of brilliance,” Carney says. 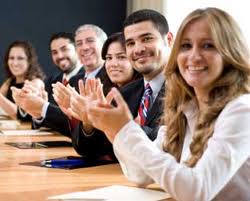 When Carney was LeTip’s Eastern U.S. director, Philadelphia Mayor Ed Rendell honored Peterson for his enormous impact on the city.

That precisely illustrates the magnitude of Peterson’s staggering influence. And that was just for one city. Imagine the impact when you go from city to city to city.

“It takes an extraordinary person to start an organization like this,” says Barbara Rapp, senior vice president of LeTip, “and Ken Peterson is an extraordinary person. When he speaks at conferences, I’m overwhelmed with emotion because of the vision he had of this organization and how it crystallized. What he created goes way beyond money. The bonds that are cemented in LeTip are so meaningful. What Ken did is make LeTip a family. My heart fills with emotion when I think about it. I’ll revere Ken Peterson forever.”

As will many other people.

[Rick Weinberg is Editor-in-Chief at California Business Journal. He is a well-known journalist, writer and reporter who has worked for the New York Times, FOX and ESPN. He launched CalBizJournal.com to focus on California businesses and business professionals and California business information and news.]
ADVERTISEMENT
Tags: advertisingbookCaliforniacancerchildrenchiropractorcommercialcultureDiegoexecutiveFeetfinancial advisorfocusGroupinformationinsurancejournalistKenKen PetersonLandleadsLeTipLos Angelesloyaltymarketingmedicinemortgagenetworkingnetworking groupNew YorkOCOrange CountyPetersonplannersrelationshipsreporterSan DiegostoriesTexas
ADVERTISEMENT