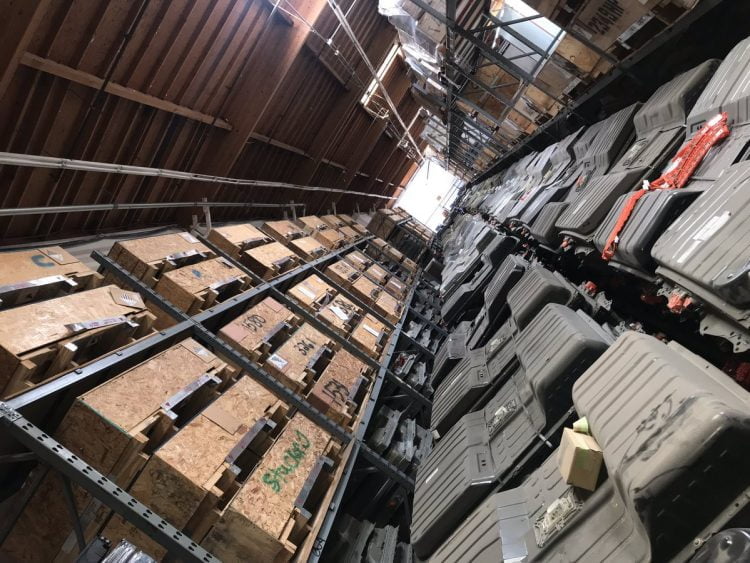 Eric Lundgren isn’t just saying he’d like to solve the global crisis of e-waste pollution. He’s doing something about it.

If Eric Lundgren gets his way, not one electric vehicle (EV) battery worldwide will ever end up polluting a landfill again.

As a social entrepreneur and environmentalist, he is helping to accomplish this with his newest venture, BigBattery.

Lundgren’s “Zero-Landfill” solution means that his firm will never put anything from its facility into a landfill.

Instead, he is recycling lithium-ion batteries used in electric vehicles and promoting mass adoption of renewable energy solutions.

Lundgren’s innovative solutions are helping to solve the global crisis of e-waste pollution and saving lives of people in Africa, where the largest e-waste site is located.

“Forty-thousand people in the city of Accra, Africa alone have suffered from health issues due to the carcinogens leached into the air from burning e-waste,” Lundgren says. “The heavy metals are also leaking into the water supply and the soil. Everybody in the world deserves the healthiest quality of life.”

BigBattery is the nation’s largest recycler of EV batteries and the largest supplier of surplus and re-certified batteries in the United States. Its hybrid recycling business model is to extract, test and up-cycle high-volumes of discarded lithium-ion EV batteries.

Lundgren converts them into new battery packs that are re-used in emergency, portable and solar applications that give power to remote homes. Annually, just in the United States, they process more than 470 megawatt hours of EV batteries.

With four facilities, spanning 245,000 square feet, located in the U.S., Asia, and Europe, Lundgren is not some hippie recycler that is preaching without having a solution. He is actually getting things done to solve the problem and feels that his products and process speaks to his success.

“Thousands of discarded EV batteries are brought into our facilities every month,” he says. “Using our hybrid recycling solution, we can create battery packs that will last an additional 10 to 15 years — and they are preventing horrific atrocities that happen if e-waste is dumped in a landfill.”

According to a recent article by The Balance Small Business, the amount of worldwide e-waste generation is expected to exceed 50 million tons by 2020, with an annual growth between four and five percent.

“Most people don’t get to draw back the curtain and see where and how e-waste is disposed,” Lundgren says. “Just because you’re putting things in the recycling bin, doesn’t mean someone on the other end is taking care of it properly. It’s important to explain to people where things go to die and how they can help the world instead of hurting the world.”

J.P. Morgan estimates that by 2025, there will be close to 8.4 million electric vehicles sold globally.

Lundgren says that EVs are changing the world by allowing a cheaper, cleaner, more efficient mode of travel, but the proper recycling of batteries is essential. BigBattery is buying hazardous waste that most companies are paying to dispose of and recycling it into batteries that last longer, cost less for the consumer, have a lower carbon footprint than new ones, and save lives.

While touring Agbogbloshie, the largest e-waste dump in the world, located in Africa, Lundgren witnessed first-hand the devastating effect the pollution is having on the people there. Children are paid pennies to salvage copper from a 20-acre scrap yard covered in mounds of burning electronics. While there, Lundgren saw a child that was literally bleeding from his eyes. He shook the child’s hand and it was covered in black gunk. He asked his bodyguard what the child’s name was and the bodyguard replied, “He’s a ‘ghost child.’ He’ll be dead within three years.’” Lundgren still thinks of that child today and wonders if he is alive.

Since Lundgren can literally put a face on the problem, he is committed to solving it. “Environmentalism is not about the environment, it’s about the people. It’s important that we live in an environment that’s healthy and sustainable,” he says.

BigBattery is also making an impact by providing renewable energy to areas that have been living without it. Lundgren witnessed the life-changing power of renewable energy given to those in need in India, Africa and China.

“I think of the face of a young boy named Siddhartha in India turning on a light-switch in his home for the first time with our re-purposed e-waste. I swear, his smile was brighter than the LED bulbs.”

According to the World Resources Institute, 1.2 billion people lack electricity. Recycled lithium-ion batteries can be used to store power from solar panels. The sun generates power and the batteries hold it so that it can be used at a later time when the sun is down. “They go hand in hand,” Lundgren says. “How advanced a city becomes depends on how many hours of light there are in that region.”

The cost of solar has dropped significantly enough that “everybody can afford it,” Lundgren says. A five-kilowatt battery pack can be used with solar arrays to power a refrigerator or stove, which would eliminate the need to use kerosene or fire.

Lundgren is working tirelessly to achieve his objective to eliminate wasteful practices and promote a circular economy for the benefit of all mankind. He is counting on strategic partners to help him reach his lofty goal. “When I’m long dead, people will take what I do and perfect it and it will evolve,” he says. “For now, if I’m penniless and can help solve this problem, I’m happy.”

Sharael Kolberg is Founder of Kolberg Creative Services. A former Editor at CNet News and ZDNet, Sharael graduated from the University of Hawaii with a degree in Journalism.