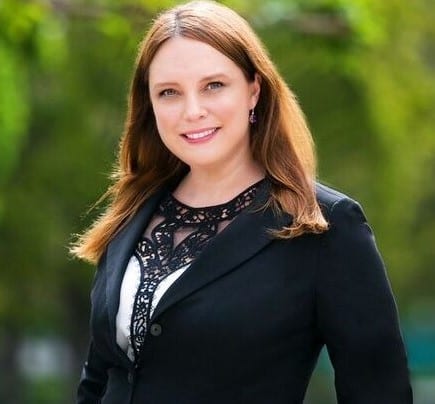 From the time she was a child, Shannon Lamb was destined to become an attorney because of her innate ability to debate, argue, negotiate – and win.

The ability to debate, argue and negotiate has been ingrained in Shannon Lamb for as long as she can remember, even as a young girl growing up in Northridge, Calif.

“I would debate and negotiate with my mother about what time to pick me up at school,” she muses. “I was very inclined to argue and debate. Everyone was already telling me, ‘You’re going to be a lawyer one day.’”

While she did become an attorney, that wasn’t her initial plan. She was a Biomedical Sciences major at the University of California, Riverside. But everything changed her freshman year while she was home during a school break.

Sitting at a stop light in her best friend’s car, an oncoming car rear-ended them. Chaos ensued. Attorneys were retained. The case went to a hearing.

Just before the hearing, Lamb learned that her attorney settled the case without informing her. “I was appalled,” she says.

Only 18 years old at the time, Lamb took over the case, acting as her own attorney.

“The judge called the original attorney into her chambers, and when they returned, the judge announced that the attorney would not be receiving any fees from the settlement or the attorney’s fee either,” Lamb recalls.

Lamb remembers standing in front of the judge arguing her case, her voice cracking from fear. “My voice must’ve been two octaves higher,” she says with a laugh. “I was terrified. But that experience came down to this: I was a good, smart person who was being taken advantage of, and I wondered how often that happened with attorneys, when people rely on them to do a great job for them, and then they pull something like that.”

That was the beginning of Lamb’s career in law. Seventeen years later, she is among the leading attorneys in a variety of legal areas, including business-related disputes.

“If there’s any kind of a dispute, I’m usually in the middle of it,” Lamb chuckles.

Her litigation and negotiating genes have even been passed on to her young daughter, who recently approached a young boy on a swing at school and offered him a carrot to give up his ride.

She won the negotiation. The young boy even handed over a cupcake and plastic ring as part of the transaction.

Lamb is as tough as an attorney can be yet she’s highly practical and empathetic.

“I can go toe to toe with the best, but I prefer to work things out if it’s at all possible,” she says.

Which her clients will attest to.

Faced with an emotional and time-sensitive legal matter, Kimberly Wimmer retained Lamb. When they spoke later the same day, Lamb had already come up with a variety of creative options for tackling the case.

“I was so impressed with how she thought outside the box and how she was extremely cognizant of what I would potentially have to spend in legal fees — and how I could conceivably recoup them — as she explained each option,” Wimmer says.

“Shannon handled the case with the right combination of aggressiveness and empathy. She is not only a great person who clearly cares about her clients, but she is also a bulldog when she needs to be. Her knowledge, creativity, strategy and empathetic approach is superior compared to the other attorneys I’ve worked with.” — Kimberly Wimmer

The contractor placed a lien on the Clutters’ home. Though the lien was invalid, Clutter couldn’t sell or refinance his home. Yet what really bothered him was that he felt he was being “bullied” by the contractor.

Lamb thrives in cases when she feels as if someone is being exploited. Her poise during numerous high-tension moments at the courthouse, combined with a confident, yet humble demeanor — not to mention her thorough knowledge and application of the law — were contributing factors to the couple winning the case.

“I’m so grateful there are people like Shannon in this world,” Clutter says. “She saved us.”

The amount of the claim was too big for small claims court but too small for unlimited jurisdiction. The first attorney the couple retained “didn’t display the compassion” they felt was necessary, considering their innocence, so they switched gears and found Lamb.

“From the beginning, Shannon was determined to help us prove that we were being taken advantage of,” Clutter says.

The key to winning the case was Lamb uncovering information against the plaintiff that the other attorney didn’t catch: an expired contractor’s license. What could have been an all-day or even multi-day trial was instead a three-hour conference between the opposing counsel and judge. The result: case dismissed.

There might not be a higher compliment of an attorney’s skill and ability than when another lawyer retains them to handle their case.

That’s what happened when attorney Monica Colonnier chose Lamb to represent her in a lawsuit filed by her mortgage company and in negotiations with the title insurance company.

“What sets Shannon apart is her ability to be sympathetic, realistic and honest with her clients,” she says. “She is also convincing and tough when she needs to be with opposing counsel. Thankfully, because of Shannon, we avoided going to court because the case was dropped after my deposition.

“I was so impressed with Shannon during the deposition,” she adds. “I found her to be eloquent and wise, knowing the right time to speak up and doing so well when she did. I was really anxious about the deposition, but having Shannon by my side gave me the reassurance I needed. She is in no way intimidated when going up against large corporations.”

The list of elated clients goes on and on, something Lamb is very proud of.

“People want an attorney who will go to the mat for them,” she says. “Yes, I can be very aggressive – that’s what litigation is all about. But I’m also very practical. With me, clients get the good, the bad and the ugly. I tell it like it is. I think that surprises people and opposing counsel. Some people think they’re getting a baseball-bat-wielding litigator when they hire me, but then they see my practical side when we’re talking about the potential weaknesses of a case. My biggest strength as a litigator is understanding the weaknesses of a case and understanding the other side as best I can.”