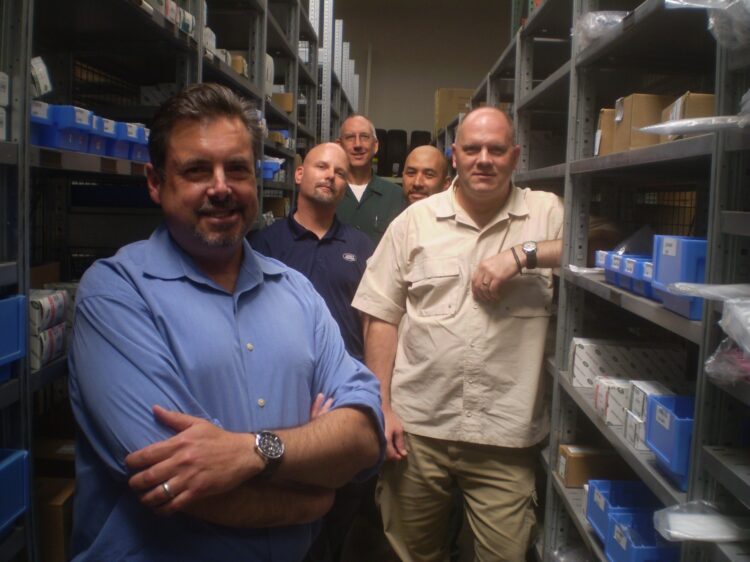 1) At his wedding, there was a designated parking area for Land Rovers only – as well as specially-made signs directing Land Rovers owners where to park.

2) His first wedding picture outdoors was taken with a parade of 20 Land Rovers behind him and his bride, Trissa.

3) Try to trip Allen up by asking him who created Land Rover and he’ll not only flash a confident grin and quickly tell you “The Wilkes Brothers – Spencer and Maurice,” but he’ll proceed to tell you their life’s story as well as the Land Rover historical timeline since its inception in 1948.

4) He has been working with Land Rovers for 25 years – basically, since his first full-time job – and he has owned seven Land Rovers.

5) He met his wife Trissa at a Land Rover dealer and proceeded to convert her into the off-road aficionada he is – he has ventured off-roading in one of his Land Rover’s more than 250 times.

6) On the back of Allen’s Land Rover Discovery is a cover with the inscription “Solihull,” which is the hallowed-ground birthplace of Land Rover in England – it is a sacred souvenir Trissa picked up during a pilgrimage to Land Rover’s origin.

Allen comprised his parts department staff based in part on their experience, knowledge and devotion to Land Rover and Jaguar. His staff consists of Darrin Simmons, Robert Isham, Steve Hamm and Victor Sanchez. 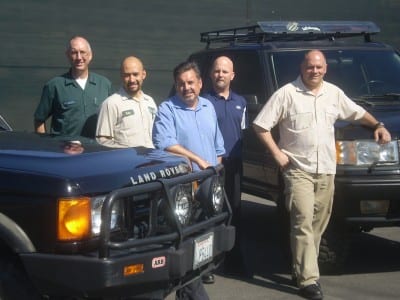 Allen admires and respects Simmons so much that this is the second time has hired him.

“He has a tremendous background in Jaguar and Land Rover products and is very passionate about the brand and off-roading, just like me,” Allen says.

The first time Allen hired Simmons was in 1999, when Allen was Parts Manager at Land Rover Mission Viejo in Orange County, Calif.

Then, just a few months ago, when an opening on the staff was created, Allen’s first phone call was to Simmons, who has spent 25 years with the English brands and currently owns more Land Rovers than even Allen himself.

Allen has (just) one Land Rover while Simmons has a pair: a ’99 Discovery Series Two and a ’97 Range Rover P38.

Like Allen, Simmons is also a huge Land Rover off-road enthusiast, trekking off-road with his wife and friends every 2-3 months.

“I love being in the outdoors,” he says. “I love being up in the trees of Big Bear or off-roading in the Anza Borrego desert with my Land Rover. It’s about the freedom of being able to go wherever you want to go and getting through seemingly impossible terrain with your Land Rover.”

Off-roading in a Land Rover is incomparable, he says, “because Land Rover technology is so much more advanced than the competition.”

Simmons caught Land Rover off-road fever in the mid-90s, when he did the famous Land Rover Trek.

Driving a Land Rover “is a lifestyle,” Simmons adds. “It’s not just a vehicle to drive to and from work. It symbolizes outdoor rugged adventure.”

Simmons isn’t the only former colleague Allen has worked with twice. Count Isham in that select group.

He previously worked with Allen in 1987 at Newport Imports before spending the last 22 years at Desert European Motor Cars in Palm Springs, Calif.

When a position opened up on the staff last year, Allen called Isham, a life-long Jaguar and Land Rover devotee, just like Simmons and Allen.

The timing was perfect. Isham and his family had grown tired of the brutal desert summer heat – sometimes 112 degrees – and they were looking to return to Orange County.

“I never expected Jay to be calling with an offer to come back and work for him,” says Isham, who has been in the auto business for 35 years, including 27 with Jaguar. “It was perfect timing.”

“Robert is perfect for this staff,” Allen says. “He’s not only one of the nicest guys you could ever meet and work with, but his professionalism is unmatched and he’s fantastic with customers.”

So is Steve Hamm, who has been in the automobile parts industry for 25 years, including the last 12 at Jaguar Land Rover Anaheim Hills with the last two years under the Rusnak Auto Group umbrella. Prior to that, the dealership was under different ownership and went into bankruptcy. Rusnak rescued it, saving the jobs of many employees working at the store at the time, including Hamm.

“It’s been an unbelievable experience working for Rusnak,” Hamm says. “Night and day from the previous ownership group.”

Hamm fits in well at the store — and on Allen’s staff – thanks to his good-nature, professionalism, work ethic and personality.

Sanchez has similar traits. He has been with Jaguar Land Rover for five years, the last year in the part department. He came to the dealership straight out of high school washing cars and running parts. Allen liked Sanchez’s personality and work ethic so much that Larson promoted him.

“He adds a whole new level of service to our department,” Allen says. “He’s an amazing hard worker who never complains or shows up late. We envision Victor, and the rest of the team, to be with us for a long time.” 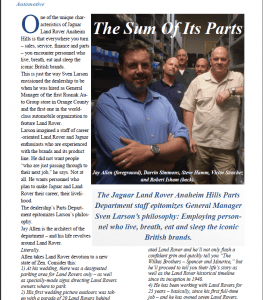