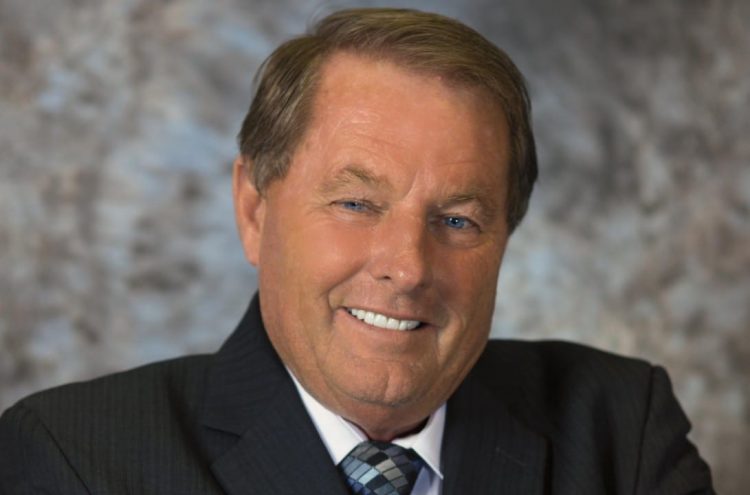 MGR Property Management is at the forefront of client-focused integrated commercial and residential real estate and property management in the Inland Empire. The company recently acquired a major 28-tenant office campus in Ontario, which is part of the economic vitalization of the city that is being driven by the growth of Ontario International Airport.

This is the ethos of Michael Rademaker, who has been a leader in Southern California commercial and residential real estate for more than 40 years. As founder and CEO of Ontario-based MGR Property Management, he has created a versatile and engaging corporate culture that fosters mutually beneficial relationships between his company, tenants and the broader community.

Rademaker and MGR are at the cutting-edge of the emergence of Ontario as a major commercial and industrial hub in the Inland Empire, most recently epitomized by his $36.85 million acquisition of One Lakeshore Centre in November 2017. The 176,813-square-foot development is poised to benefit from the city’s status as a travel and logistical hub, headlined by Ontario International Airport and major ground transport routes.

In 2017 alone, MGR acquired properties with a combined value of $138 million, becoming one of the leading holders of office space in the Ontario and Rancho Cucamonga marketplace. With occupancy rates of at least 95 percent, Rademaker credits his company philosophy with ensuring maximum performance.

“The most important thing in any office building is retention. This has been the key to our success” he says. “We treat our large tenants well, service our small tenants with their immediate needs to grow, and work with the brokerage community. In so doing, we have often achieved the highest possible occupancy between 98 and 100 percent.”

Rademaker says MGR even avoids charging for small repairs when the tenant is at fault. “If we keep the tenants happy, they won’t move out, and this brings our profits up.”

Many real estate firms have a desire to “purchase” tenants, but MGR recognizes the importance of developing optimal properties and then attracting the best clients.

With rising rents and high occupancy, he recognizes and is capitalizing upon a current “perfect storm” for success in the office market.

Rademaker’s relationship with Ontario goes back more than 50 years, when he was growing up in the region. At that time, the area was an exurb of Los Angeles and still had a strong agricultural base.

As a 19-year-old, he was attracted to the real estate field because of the opportunities that it offered those who were not well-connected. “If you went into real estate and worked hard and told the truth, you had an equal plateau,” he says. “I also learned early on that if you believe in your product, you must buy your product, so I endeavored to buy at least one property per year.”

Hence the purchase of the Centrelake Plaza property, which is across the street from MGR’s latest major addition that propelled Rademaker to another level.

“It allowed me to place my initials on the top of a six-story building with high freeway visibility,” he says. “After the acquisition and the implant of our sign on the top, we went from a mom-and-pop company to a regional player that would be in the market for good.”

Today, MGR, which is recognized as a dominant player in both the commercial and residential markets, is often compared to the Irvine Company, which owns major destination and residential spaces in coastal Orange County.

Integral to MGR’s success has been the cohesive and efficient team that Rademaker has built over the years.

“The majority of our staff started from the ground up,” he says. “We have a tremendous number of long-term employees, which is the goal I have in hiring anyone.”

Many members of the MGR team have advanced from secretarial roles to property management positions. As a single parent himself, Rademaker says flexibility and a commitment to family values has been central to his company’s culture.

Rademaker’s third-story office provides panoramic views of the San Gabriel Mountains to the north and the surrounding community, which is poised for a major expansion that he is ready to lead. Now under local control, Ontario International Airport is at the cusp of offering direct flights to China, forging a connection with the Pacific Rim and the Southland Asian-American community. The growth of the airport is a primary catalyst for the commercial real estate market in the immediate vicinity.

“It is easier for someone from North Orange County or the San Gabriel Valley to get to Ontario Airport than LAX because the route goes against the traffic,” he says. “I believe this area offers a great quality of life with great shopping and entertainment and the ability to avoid long commutes, along with low crime rates and newer properties.” 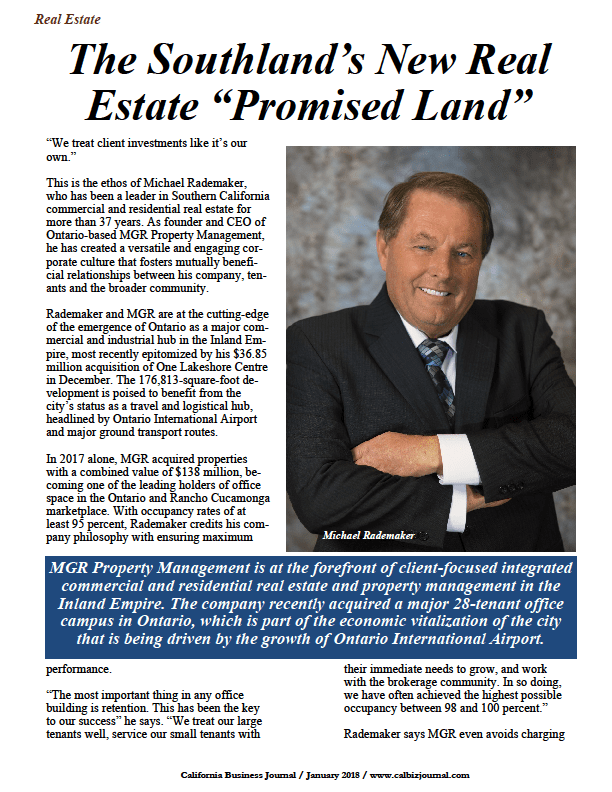