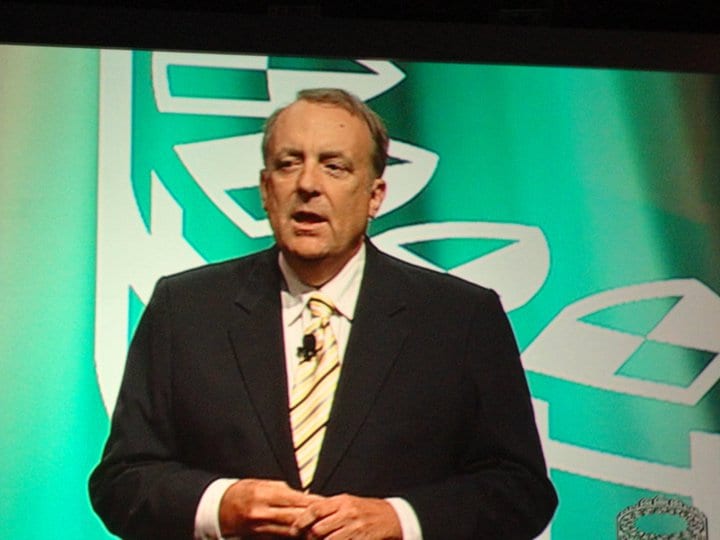 Wealth Advisor Dr. Guy Baker is one of only a small number of financial experts internationally who have qualified for the “Top of the Table” for 42 consecutive years, which places him in the top one percent of those inducted to the Million Dollar Roundtable, a 60,000+-member organization in the financial services industry.

Bears, bulls, recessions and bubbles. Wealth advisor Dr. Guy Baker has seen them all. A veteran of the financial services industry, he has ridden the market’s roller coaster so many times that it no longer makes him nauseous. He’s helped thousands of clients, authored eight books, and even found time to get a PhD, but what truly sets him apart is his investment method. With roots in academia, Baker’s approach to financial security will definitely surprise you.

His career started earlier than most. An economics major at Claremont McKenna College, Baker discovered a knack for selling and was already hiring people for the financial services industry at the age of 22. He continued the work while pursuing his MBA at the University of Southern California, but was so skilled in sales — and had already achieved so much success — that postgraduate job offers fell far short of what he was already earning part-time. All of the full-time jobs he interviewed for offered a salary at least a third lower than what he was earning, and he wasn’t even working on it full time. So he decided to stay in financial services and focus on managing liabilities, which includes disability, life insurance, and helping people understand taxes. He worked in that capacity for the next 25 years and in that time created BTA Advisory Group for marketing and BMI Consulting with a colleague.

What “changed everything” for Baker was a seminar he attended in 1992. A self-professed enthusiast for all things educational, Baker was listening to the Dimensional Fund Advisors story started by Founder David G. Booth, a philanthropic legend whose name now graces the University of Chicago’s Graduate School of Business. DFA was seeking Registered Investment Advisors who could see the benefits of using the DFA methodology. It was then that Baker decided to add money management to his services. This would allow his firm to handle both sides of the financial state – assets and liabilities.

The day-long slog of presentations and discussion was a test of endurance, but to Baker, the Dimensional Theory was an epiphany. “It was an eight-hour seminar, but to me, it felt like 10 minutes. There was an explosion in my brain,” he says, still with excitement in his voice. Their theory, which is based on five Nobel Prizes and promoted in elite graduate business schools, uses research and scientific testing to combine three anomalies to produce market returns as long as the investor does not try to out-guess the market. It was groundbreaking in 1992.

“This makes a lot of sense.” Baker thought at the time. “This is something I have got to bring to my clients.”

The methodology is scientifically-based. It’s built on hypothesis-testing, historical data and confidence interval testing. “When I saw the mathematical probabilities behind their methodology, it just made sense for me to invest client money scientifically compared to hoping my judgments were right,’” he says.

Baker stands by the theory and so does his most discerning client: his wife. She asked him to manage her aging parents’ money in 2012. His disciplined management enabled their portfolio to fund both parents’ long-term care costs in two different facilities while retaining most of its value. Anyone who has seen the bills involved with long-term care will attest, this is impressive, but Baker says the greatest financial success story is even closer to home.

“The greatest testimony of my management skill, was that after my father died, I managed my mother’s affairs for 23 years, until she as 90. I paid all of her bills and managed her money. She had more when she died than when she started,” he says proudly.

Baker’s fact finding and problem-solving abilities have kept him at the Top of the Table, an organization only for the top five percent of all advisors qualifying for the Million Dollar Roundtable, a 60,000-member International organization. He has also served on their Executive Board in 2006, was elected president in 2010. He is scheduled to speak on their behalf three times this coming year in Korea and Miami.

As a wealth manager, his firm exceeded $100,000,000 in just five years. “If you don’t have a scientific method behind your investment strategy,” he says of investment, “then it’s all guessing and I just have never felt like I was a very good guesser.”

Investment clients are either right or left-brained, he explains. “One thing I always ask is ‘Are you an investor or a speculator?’” He says everyone considers themselves an investor, but in reality, most investors are speculators who jump at the slightest movement in world events, who want to sell off, for example, if Greece defaults or the U.S. puts tariffs on China.

“That’s speculative behavior,” he says. “Investors don’t allow that type of thinking to impact their strategy.” He reminds clients that when they stay in an up-and-down market, they’ll be better off in the long run. “When the market goes down, you may think you lost money. But you really didn’t, unless you sell. Generally, you really only lose money if you sell.”

Dr. Baker often cites advice offered by Warren Buffet: Build your methodology on an intellectual framework and then put guardrails around you, so you won’t destroy that framework when you get scared. “Allowing their fear to overcome their good judgement” is one of the worst mistakes any investor can make.”

The second biggest mistake is losing control of personal expenses. “If investors can’t control their living expenses, they will erode their capital,” he says, particularly if they don’t set aside money for those unexpected expenditures. It echoes the sentiment of finance radio host and writer Dave Ramsey, who once warned, “You must gain control over your money — or the lack of it will forever control you.”

The future of wealth management depends on how investors react to world events and market changes. For young people looking to do what Baker does, he advises going to college and graduating with any degree, then taking classes via The American College for industry-specific designations. If that’s not possible, he says frugality and common sense can be excellent teachers. In his book, Baker’s Dozen, suited to millennials, Baker writes that “young people need to know how to save money, control debt and control expenses.”

The rest is good old-fashioned hard work, along with that Nobel Prize winning theory, which helped Baker become one of the most successful men in the history of his industry. He says a recent client summed it up best. “He told me the reason he chose our firm was because he believed in our methodology. He said that as long as we stay with the method, he will stay with us.” 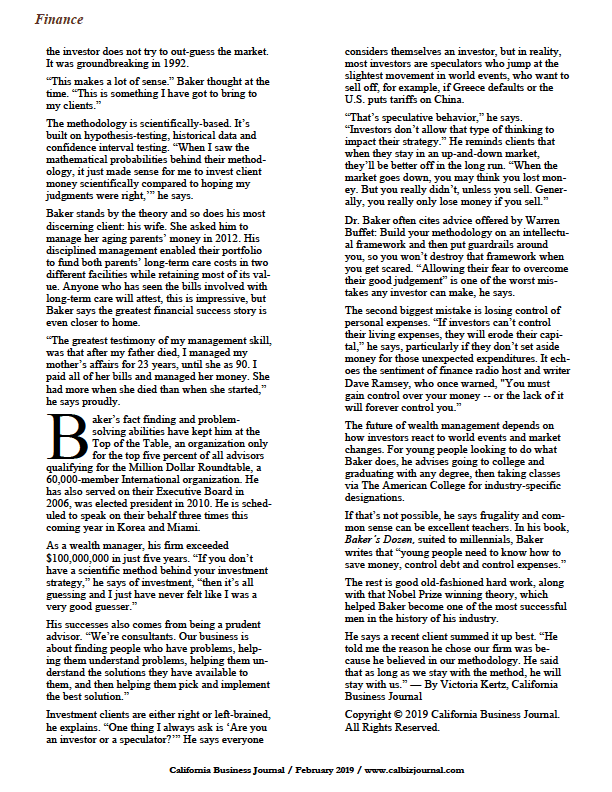