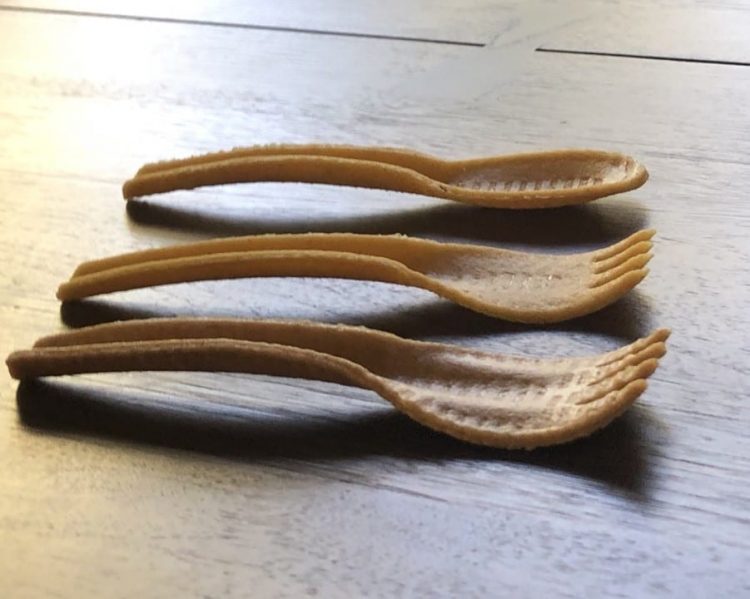 The Quest to Develop Alternatives to Single-Use Plastic Utensils

Outsect Corporation is solving the global demand for functional, 100% biodegradable and zero-waste alternatives to plastic utensils.

Plastic pollution has become a hot-button topic for environmentally conscious consumer groups and municipal governments. Since the 1950’s plastic has served as the global packaging material of choice, allowing companies to market effectively, design attractive packages, prevent retail loss, and transport goods economically throughout the world. However, plastic packaging for food, beverage, and consumer discretionary items has an environmental downside: with an average useful life of only fifteen minutes, it accounts for over 60% of global beach litter, as well as comprises a significant portion of the Great Pacific Garbage Patch, which is now estimated at twice the size of Texas. 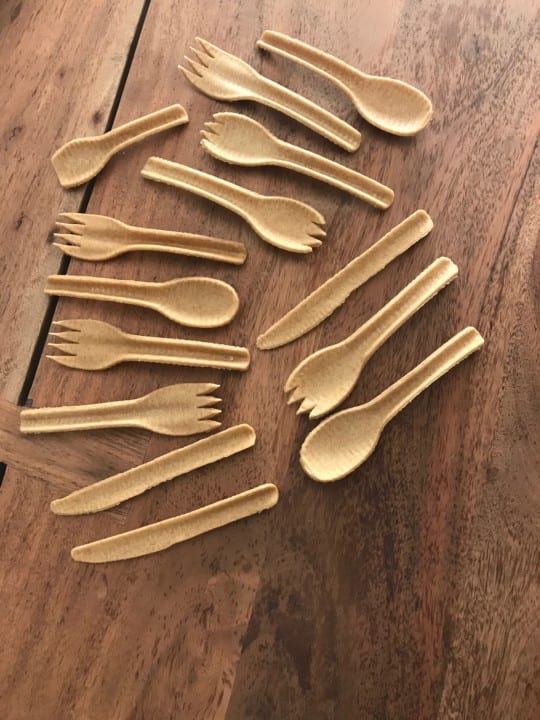 Plastic is a material made to last forever, yet 33 percent of all plastic – water bottles, bags and straws – is used just once and thrown away. Plastic cannot biodegrade; it simply breaks down over time into smaller and smaller pieces. Disposed plastic materials remain in the environment for up to 2,000 years and longer. During this process, plastic poses various threats to human health through microplastic particles in the food chain, toxic chemical release, and groundwater contamination.

As local and national governments have recognized the wastefulness of single-use plastic bags over the last decade and enacted legislative actions (China banned the use of free plastic bags in 2008; California in 2015), the focus of attention has recently turned to single-use plastic straws and utensils, which cumulatively account for staggering amounts of waste annually.  Americans use and dispose of 500 million straws daily; Starbucks recently announced it will phase out plastic straws by 2020.

In the United States alone, over 40 billion plastic forks, spoons and knives are used each year. Worldwide the number of single-use plastic utensils is estimated at 500 billion annually. Millions of fast food restaurants and grocery stores contribute to the explosion of waste, as plastic utensils are hygienic and extremely inexpensive to produce. While the specific plastic materials most commonly used to manufacture utensils – polypropylene and polystyrene – are technically recyclable, most recycling plants will not accept them because they are difficult to process and are not cost effective per unit to recycle. With the vast majority of plastic utensils ending up in landfills or oceans, it is imperative that alternative, eco-friendly, and cost-efficient solutions be developed.

There is further economic and infrastructure urgency to finding sustainable alternatives to plastic utensils. Until recently, much of the plastic waste from North America and Europe was delivered by container ship to China for disposal and processing. For three decades, China imported over 40 percent of the world’s plastic waste for fee-based processing and disposal. As of January 2018, however, China put its environmental needs first and imposed a ‘Green Fence’ policy prohibiting further importation of plastic waste. Currently, landfill disposal of plastic is the only remaining option for US businesses – and a very expensive option – as the 80+ trash incineration plants operating in the US refuse to accept the types of plastic used in the forks, spoons, and knives of the QSR (quick service restaurant) industry.

The city of Malibu became the first US municipality to ban plastic utensils on June 1 of this year. Seattle followed suit in July with a ban on the use of straws and utensils in restaurants and bars. Many other locales have legislative bills pending, including the state of California bill AB-1884 which if passed will require straws to be provided to consumers only upon request. 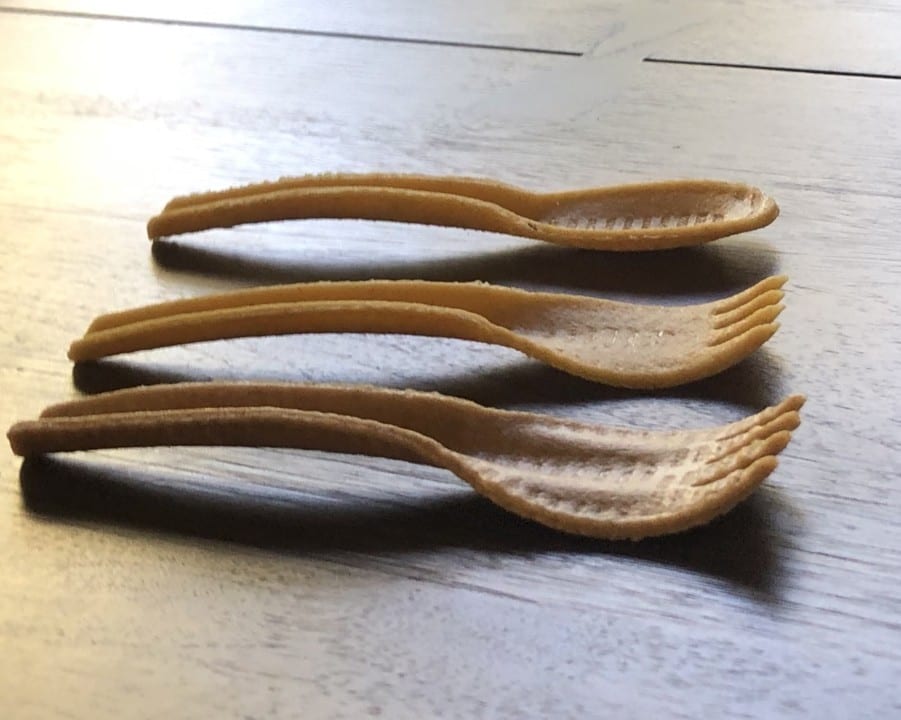 To comply with the new ordinances, food service businesses have turned to several alternatives to petroleum-based plastic, none of which, unfortunately, can truly be described as sustainable. First, there is the category of biodegradable plastics, or ‘bioplastics.’ Commonly used bioplastics are PLA (polylactic acid) and PHA polyhydroxyalkanoates), which rely on a chemical polymerization reaction that transforms corn or sugarcane during the manufacturing process. No more than 50% of the raw material transfers to the finished bioplastic product, resulting in substantial material waste at the manufacturing site. And despite their marketing claims, bioplastics cannot degrade in normal environments within a reasonable period of time, still needing decades to degrade under standard temperature and pressure conditions. In addition, bioplastics typically require blending with petroleum-based plastic to increase the utensils’ functional mechanical properties. Bioplastic products must be labeled ‘Recyclable in Industrial Facilities.’ Unfortunately, few such facilities currently operate in the United States.

Another material option is cellulose derived from wood, bamboo and palm. Bamboo and palm utensils are mostly exported from Asia, which entails significant carbon emissions due to transportation. Raw material for wooden utensils may be sourced from fast-growing tree species, which are replanted cyclically; or even from the remnant wood of furniture manufacturers. Bamboo needs about five years of growth prior to harvest. While cellulose-based materials are natural in origin, in order to prevent bacterial and fungal contamination, the finished utensils need to be treated with sulfur dioxide or hydrogen peroxide, and these chemical agents have been shown to cause harmful human health effects. Cellulose products are not recyclable and take years to degrade in an anaerobic landfill environment. In a composting environment, they may take several months to degrade, but the only plant-nutritive output of wood or bamboo products is simple carbon humus. In brief, wood and bamboo are semi-sustainable materials, but are not ideally suited for single-use disposable utensils.

Outsect Corporation, a San Diego-based company, was founded in 2017 to address the significant global demand for functional, 100% biodegradable and zero-waste alternatives to plastic utensils. Design criteria included mechanical properties, better biodegradability in the form of compostable waste management, minimal supply chain carbon emissions footprint, and cost-competitiveness with current plastic offerings. Outsect’s primary innovation lies in designing and manufacturing utensils exclusively from natural grains.  In the past, several companies attempted to make edible spoons in order to take advantage of the high degree of biodegradability found in grain flours, with varying degrees of success.

None, however, had successfully produced a fork or knife with the requisite strength to hold and cut food. What Outsect’s bioengineering team discovered (and which serves as the basis for its pending patents) is that the two key factors to developing strength in grain-based functional utensils are density and molecular bonding. To increase the density of product, the water percentage in the raw dough must be restricted. This requirement directly conflicts with the basic premise of injection molding techniques used for plastic utensils, which require liquefying the injected material, whether molten plastic, or raw dough in the case of Outsect’s proposed product. Armed with this particular insight, Outsect developed an all-new, innovative mold technology that allows a dough with extremely limited water content to form a high strength product. Outsect spent a year refining its groundbreaking mold through seven iterations with the help of 3D printing and rapid prototyping. The final molds are intended for use in a fully automatic production setting, with maximum capacity and yield on an industrial scale of production.

Another key consideration in Outsect’s business planning was sustainable supply chain management (SCM). While the initial utensil formulations comprised three staples of US agriculture – wheat, corn, and soy – it would not be environmentally responsible to export these flours around the world simply to make compostable utensils: the carbon footprint involved in materials transportation would soon negate the benefits of biodegradability in a full lifecycle analysis. For this reason, as well as to keep costs to the absolute minimum, as required of any commodity product, Outsect found it essential to define specific formulas for each of the earth’s agriculturally distinct regions, covering nearly 60% of the world’s population. For example, because sunflower seeds are readily available in Europe, the European formula uses sunflower seed flour in place of soy flour; In Southeast Asia, the byproduct of palm oil extraction is a key ingredient; in tropical zones, wheat is reduced and even eliminated; in less temperate zones, rice does not figure as a significant component in the formula.

Having filed patent applications on the formulations, molds and designs for a full range of 100% biodegradable, backyard compostable utensils, Outsect Corporation has recently commenced its commercial efforts. Under the banner of its TwentyFifty brand, in March 2018 the company debuted its first fork product at the Natural Products Expo West show in Anaheim, generating a great deal of ground-level buzz.

To get rid of rubbish the right way, here is some background information regarding northern beaches rubbish removal with Ridly.

Television media such as CBS and FOX have featured the TwentyFiftyFork in newscasts, and the product has also appeared in various print and online publications across the country. With a pilot production facility now operating in Oceanside, California, the company has a phased scale-up manufacturing plan to meet market demand from thousands of utensils per day to millions per day.  Even as we contemplate these exciting prospects of growth, however, and as a member of the American Sustainable Business Council (ASBC), the team at Outsect Corporation remains mindful of its Triple Bottom Line (TPL) mandate, which includes people and the planet, as well as profitability within a total sustainability framework that examines our company’s social, environmental, and economic impact. — By Zhicong ‘Zack’ Kong, CEO, Outsect Corporation