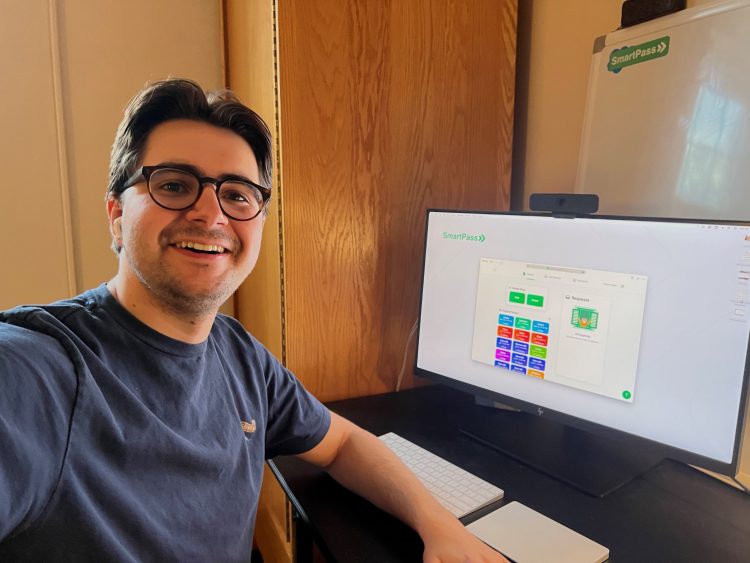 Peter Luba created SmartPass: a digital hall pass, with an emphasis on safety and administrative analytics.

And we're not talking about the Owen Wilson-Jason Sudeikis-Christina Applegate classic comedy.

While most people were focusing in class, it was clear to Vice Principal Dan Bontempo and a group of perceptive students that the hallways presented a different side of the story. What began as a group of students observing high school life in between classes, slowly evolved into an industry-defining business that brings students and staff more in touch with each other than ever before.

Peter Luba was one such student. Looking for a new experience in the hallways and outside the classroom, he noted that “There were tons of kids wandering around the hallways at my high school. It was a big problem.” Without a universal way to monitor student activity in the hallways, it was very difficult to keep track of everyone―both from a safety perspective, and from a productivity perspective.

Under the guidance of Bontempo, Luba and his friends turned their thoughts into action and created SmartPass: a digital hall pass, with an emphasis on safety and administrative analytics. “Instead of writing their name down on a sign-out book at the front of the room, or taking an old-school wooden block, a student would go on their Chromebook or their iPad for their hall pass,” says Luba, Product Manager & Design head.

SmartPass uses an intuitive and simple design to digitize the hall pass in K-12 schools. By requiring students to stay on task and document their travels through the hallways, school staff is able to prevent vandalism and loitering, while simultaneously documenting student activity in the event of an emergency on campus.

“We were students when we made this, and you can tell from the app just how much care went into it. Because we were students, we recognized that we had to create the easiest solution for students,” says Luba. “Almost everyone on our staff, even our salespeople and developers, they’ve worked in schools. We can claim that SmartPass is for students, by students, and for educators, by educators.”

The customer-facing attitude of the SmartPass team is an instrumental part of their success, especially in the face of the COVID-19 pandemic. As schools are opening up again across the United States, SmartPass is seeing a surge in growth as they adapt their software to implement a new wave of education system-based COVID safety.

“We realized that, as schools started coming back, SmartPass could play a really, really big role in helping set up certain restrictions within the school building.” Luba, Bontempo, and the rest of the team noticed the golden opportunity that was offered to them by the pandemic, and didn’t hesitate to take it. According to Luba, “We found out pretty early on that, as schools were planning to go back, they were going to limit the number of students, let’s say, in a restroom, and then have a teacher stand outside that restroom.”

From a safety standpoint, an administrative monitor charged with watching the bathroom would achieve the goal, but not without wasting time and sacrificing valuable school staff members. SmartPass is successfully filling this void. Through digital documentation and student-teacher accountability, the revolutionary hall pass technology is ushering in a new wave of COVID regulation within the U.S. school system.

SmartPass’s “Active Pass Limit” is the company’s secret weapon when it comes to social distancing in school hallways and restrooms. Luba puts himself in the student’s shoes, in the typical SmartPass fashion: “You have a SmartPass student sitting at their desk, thinking ‘Is this bathroom full? Or do I have to wait?’” The Active Pass Limit is a method of tracking population density in certain areas of the school, thus ensuring that students can maintain their personal safety, both in the restrooms as well as other spaces outside the classroom.

But, Luba and his team take it one step further. “Let’s say a student tested positive. You could then pull up a report including all of the potential students that they interacted with in the hallways. Schools absolutely loved it, and honestly, our sales skyrocketed because of it,” he says.

“We are in constant communication with schools that are using us, just to see exactly what features they have in mind or what problems they have. Students can set up a time to meet with a teacher―that can all be facilitated through SmartPass.” Luba and his team use school administration and student feedback to improve the SmartPass app, a method that has enabled the software to expand across hundreds of schools.

The nonstop conversation between SmartPass and its educative customers continues to bring about new waves of innovation within the company. “It has slowly morphed from a COVID digital hall pass, to now, they’re using it for vandalism in bathrooms, or parent-teacher conferences.”

Ring In A New Technology