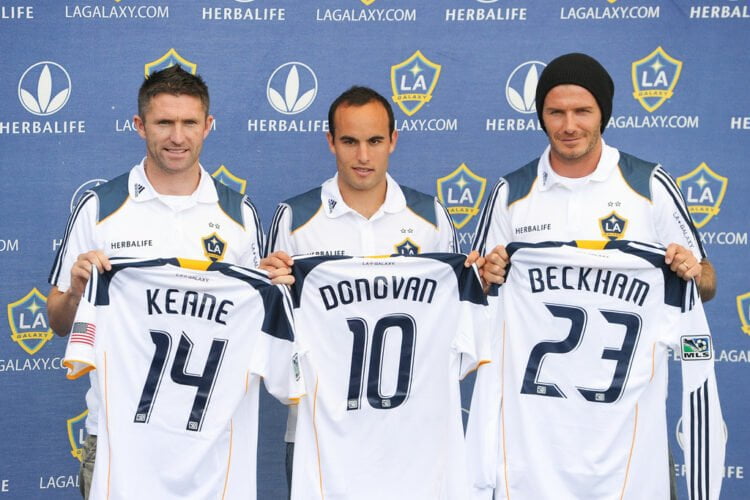 Soccer has had a tough history in the USA, but many fans adore it, and the country even hosted a World Cup in 1994. There is every reason to get excited for the future of soccer with another World Cup on its way to North America in 2026 and one this year where the USNMT has a strong chance of going deep into the tournament.

Over time California has been a hub for fantastic talent playing for clubs such as LA Galaxy, San Jose Earthquakes, and many more smaller clubs in The Golden State.

However, in this comparison list, we will just focus on those two Major League Soccer teams (MLS).

The first name on the list is a player who played for both sides with great acclaim. He represented San Jose first on a loan spell from German side Bayer Leverkusen and scored 32 times in his 87 appearances. Whilst with Earthquakes, he represented the USA at the 2002 World Cup in South Korea and Japan, and he was named the best young player of the tournament.

At the end of his loan spell, he decided to stay in California but turned out for LA Galaxy this time, and in the process, he became a legend of the club. The tricky winger played 247 times in the league (6 later loan appearances) and scored 113 times when turning out for the club.

He has legend status in California for helping San Jose Earthquakes win their only two MLS Cup wins, and he also picked up four more with LA Galaxy during his illustrious career in the MLS.

David Beckham is a household name, and not to have him on this list would be a travesty to American soccer. Beckham may have been accused of enjoying his celebrity lifestyle, but you cannot question the man’s commitment to the cause on the pitch and the practice field.

Beckham had a six-year stint with Galaxy with loans at AC Milan and whilst the MLS was in the off-season. However, he played over 118 times and scored 20 goals. He was the first English player to play for an American side whilst representing his country.

More importantly, he also lifted the MLS Cup twice in 2011 and 2012, alongside Landon Donovan.

Labeled, possibly incorrectly, as a legend and one of the best English players in the game. However, Huckerby was a dedicated footballer and was very talented but probably not as much as he was hyped by Gary Radnich in that famous interview.

However, Huckerby did light up the MLS during his short stay in California. In his first season with the Earthquakes, he helped them go seven games unbeaten, and in that spell, he got three assists and three goals to his name. He quickly became a cult hero amongst the Earthquakes fans.

Perhaps not a household name like Beckham, who signed the season before, but Huckerby managed to win the 2008 MLS Newcomer of the Year Award. Unfortunately, he had to retire the season after.

The Irishman knew where the net was wherever he played; there is a reason he signed for Inter Milan as a teenager. Keane set records wherever he played, and the all-time Ireland goalscorer carried on his goalscoring tradition in the MLS.

He spent six seasons at LA Galaxy and hit double figures in the league bar once (his first season where he only played four times). Keane was perfect for Beckham as he knew where to put the ball. Keane grabbed 104 goals in all competitions during his time.

More importantly, he took home three winning medals in the MLS Cup, including one as captain in 2014.