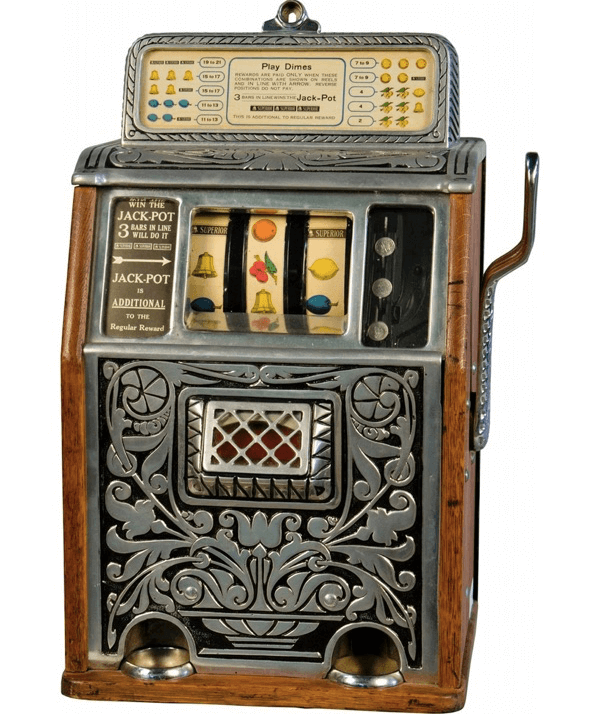 The developer of the slot machine is Charles Fey, who created three reels, each of which contained five symbols: horseshoe, diamond, spade, heart and a Liberty Bell

The history of the slot machine is truly fascinating.

Most of us will have cranked the handle of a slot machine at some point in our lives. Some walked away winners, some losers, and some really interested in how this fascinating piece of technology came into being. If you’re part of the latter group then you’re in luck, because here’s the brief history of slot machines.

The first slot machines that closely resemble those that we know and love today came about thanks to Sittman and Pitt who in 1891 developed the first slot machine. This machine contained five drums, each printed with ten cards. It was based on the game of poker, so when you inserted a coin, the drums would spin and a five-card poker hand would show. If the hand was a good one you could win beer, or cigarettes from the bar. If it was less good, then you’d paid your nickel and that was that. These proved extremely popular and soon could be found all across New York.

As anyone who has played poker will know, there are a huge number of winning combinations. Bars could tamper with the machine’s odds by removing certain cards. This also made it hard to include a standardized automatic payout option. There were already a huge number of options on the reels, not taking into account the opportunity for ‘customization’. Charles Fey of San Francisco developed a machine with just three reels, each of which contained five symbols: horseshoe, diamond, spade, heart and a Liberty Bell. The last of these symbols gave the machine its name. This reduced the number of cards from 50 to 15, making it possible to include the automatic payout mechanism. The machines were incredibly popular and were soon all around the country. However it wasn’t long before California’s casino industry suffered a decline, the machines were banned in this state. Luckily for Fey though, they had become so popular elsewhere that there was more than enough business to keep him at full production.

For a long while, Charles Fey and copiers of the Liberty Bell machine had the monopoly, it wasn’t until 1963 that the next mover and shaker of the slot machine industry would come along, the Money Honey. This machine was entirely electromechanical, meaning it had a hopper that didn’t need emptying and a mechanised payout of up to 500 coins, with no need for an attendant. This game was a similar runaway success to the Liberty Bell and made Bally an awful lot of money. It also saw the end of the side lever.

In the modern-day, there have been two distinct branches of invention, the online slot, and the in-person video slot. Focusing first on the online branch, there are thousands of casino online apps that players can choose from. Online slots allow players to play from the comfort of their own homes and have genuinely revolutionized the industry.

The video slot, on the other hand, was developed back in 1976 by Fortune Coin Co. This machine used a basic interactive television display for the slot machine functions. It went on trial at the Las Vegas Hilton and after some stripping back and remodeling was approved by the Nevada state commission. Nowadays these video slot machines are more common by far than the crank handles and still just as much fun to play.