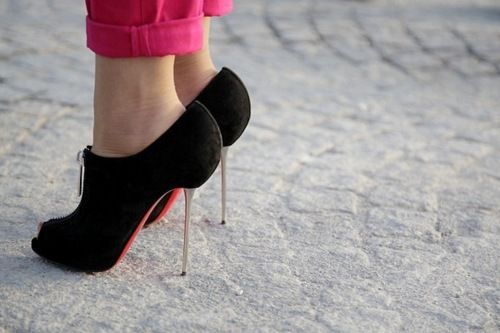 1. It is illegal to manage livestock when intoxicated in the UK.

According to section 12 of The Licensing Act, 1872, persons who handle any livestock, horse, carriage, or steam engine on any street or other public place face the same penalties as those found intoxicated.

2. Women in Carmel, California do not wear high heels

This law comes from Carmel, where women may not wear high heels within municipal borders. Wearing shoes with heels above 2 inches high or a base of less than one square inch is illegal in Carmel unless the wearer has secured permission.

The municipal attorney created the prohibition in 1963 to prevent the municipality from litigation resulting from high-heeled shoe wearers stumbling over uneven ground damaged by tree roots.

3. You may not shake your rug

Section 60 of the Metropolitan Police Act 1839 makes it illegal to beat or shake any carpets, rugs, or mats before eight in the morning (8 am), except for doormats.

4. In California, it is illegal for women drivers to drive while wearing a housecoat

It is unlawful for women to drive while wearing their housecoats, often known as nightdresses, in California. Females who flout the law may face severe consequences. Change out of your nightgown and consider wearing a jacket before getting into your automobile the next time you’re hungry late at night.

5. You may not dress up as a cop or a military member

Dressing up as a police officer, soldier, or armed forces member on purpose is illegal in the United Kingdom. The Seamen’s and Soldiers’ False Characters Act 1906 and the Police Act 1996 were implemented to prohibit persons from purposefully impersonating a police officer or army troops, which may be exceedingly confusing for public members and can even lead to hazardous circumstances.

6. It is illegal to sleep on the street in Eureka, California

If you are tired when driving through Eureka, California, and need to pull over and sleep on the excellent concrete road or sidewalk, resist the urge! Sleeping on the street within city borders carries a $1,000 fine and a six-month jail sentence.

You’re better off sleeping in your car’s cushioned seat or an actual bed at a nearby motel if travelling through this town. It is essential to be well-rested when driving, so do whatever you can to get some shut-eye before continuing on your journey.

7. It’s illegal to carry wood planks along pavements in the UK

It’s illegal to carry planks of wood along the sidewalk in the United Kingdom; it can only be moved if put into a structure or unloaded from a vehicle.

This law dates back to the Middle Ages, when carts were frequently overloaded, causing the wood to fall off and endanger the welfare of pedestrians. If you must carry a piece of wood on the pavement, do so with caution and be mindful of those around you.

8. Buying gasoline while drunk is prohibited

Selling gasoline to an intoxicated individual is illegal in Fresno, California. Although odd, it may be justifiable sometimes. However, prohibiting the selling of fuel to someone drunk sounds excessive.

It’s hard to believe that these strange laws are still on the books, but they are. While most of these laws may not be actively enforced, it’s still fascinating to know that they exist. So, the next time you’re in the UK or California, be sure to abide by these laws, or you may face some severe consequences.

Q&A with Image Consultant Emily Katz
Tags: attorneyCaliforniadrunklawlitigationSome of the Most Unusual Laws You’ll Ever Experience in the UK and California
ADVERTISEMENT