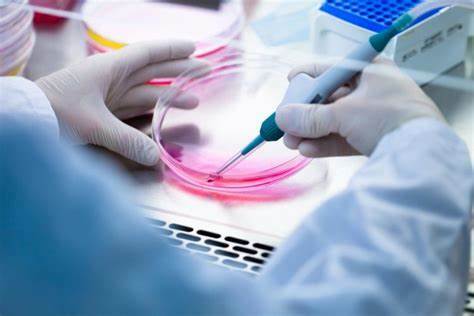 The procedure is designed for pharmaceutical developers, universities, hospitals, government and independent labs.

Celltrio Inc. is quite the contrarian. The Santa Clara start-up specializing in robotic automation is making an impact in the automations industry dominated by some of the world’s largest manufacturers — Honeywell International, Parker-Hannifin Corp. and Rockwell Automation Inc.

Celltrio is also at the forefront of life science equipment innovation, though its design methods are two centuries old.

“We take a modular approach to provide solutions,” says Chief Executive and Co-Founder Charlie Duncheon. “This isn’t custom engineering. This is very scalable.”

Modular design, in simple terms, subdivides a system into smaller parts called task modules, which can be independently created, modified, replaced or swapped.

The concept first surfaced in the 1830s when London carpenter John Manning built a prefabricated home for his son, who was moving from England to Australia. The following decade, the construction style moved stateside to meet the housing needs created in the California gold rush.

Today, Celltrio is utilizing the design theory popularized in LEGO building sets to automate manual lab processes, such as raw cell division and harvesting cultured cells, for its growing customer base of pharmaceutical developers, universities, hospitals, and government and independent labs.

The applications for its products are vast, from standard research and development in genomics and personal medicine to cell isolation and propagation. In the era of COVID-19, with more potentially lethal pandemics on the horizon, the need for drug discovery has never been greater.

Jeff Baird, Celltrio’s Vice President of Engineering, offered this potential use case: “Those could be virus cells that are growing, so they could be testing a new vaccine.”

For the biobanking segment, Celltrio offers manual and robotic lines of liquid nitrogen freezers, with a chilling factor of -190 degrees Celsius and a 9,000 to 117,000 vial capacity, ideal for storing voluminous biological samples. The products can be expanded into multi-freezer configurations with Celltrio Skyview software.

For the cell culture automation segment, the company designs, manufactures and sells stand-alone task modules, including incubators, centrifuges and liquid handlers, which can be automated by integrating robotics, and/or configured into a central unit by linking software and laboratory information management systems.

From Stealth Mode to Sell Mode

Unlike most newcomers, Celltrio has been generating revenue since its inception.

Under the agreement, it relicenses the technology to Robots and Design in the Korean market, and has global exclusivity everywhere else. Celltrio also acquired 22 software and hardware engineers in the deal and hardware manufacturing capabilities in South Korea, though Duncheon envisions shifting production to the U.S. as the company scales.

“In time, especially with the strong market we see in the U.S., it will make sense to manufacture these modules and hardware in the U.S. and not ship them across the Pacific,” he says.

Freezers and incubators, for example, are about the size of commercial air compressors, weighing as little as 50 pounds. Larger installations for pharmaceutical customers are as big as a one-car garage and can easily weight more than a ton after assembly.

Celltrio in January inked a distribution agreement with Worthington Industries Inc. (NYSE: WOR), which is selling and providing customer service for its line of RoboStorTM freezers throughout North America. The Columbus, Ohio-based diversified metals manufacturer reported sales of $3 billion in the 12 months through May, the end of its fiscal year.

Duncheon, a serial entrepreneur who’s spent more than 30 years in executive roles, is considered a pioneer in the robotics and factory automation industry, like fellow co-founder Jin-Oh Kim, who serves as chief technology officer.

Duncheon’s longtime consulting work led to a chief executive role at Stanford Research Institute International spinout Artificial Muscle Inc., which was acquired in 2010 by a Bayer AG subsidiary; and a founder and CEO position at venture-backed Grabit Inc., an intelligent automation systems provider.

Kim, a former director of Samsung Electronics’ robot business, has led the development of more than 400 robots and systems from the chip sector to biomedicine. The duo—who both earned Robot Industry of America’s highest honor, the Joseph Engelberger Award for Leadership—zeroed in on life science automation as Celltrio’s initial target market.

The segment, which has been slow to adopt automation processes, is one of the fastest growth areas in industrial manufacturing, as the need to bring new drugs to the market faster and cheaper intensifies.

Market researcher Technavio forecasts the industrial automation market in life sciences will grow at more than a 6% compounded annual rate through 2024, when sales and services are projected to eclipse $7.2 billion, up from $5.3 billion last year.

Celltrio is projecting a big revenue jump and positive cash flow next year as it takes on Honeywell International, Parker-Hannifin Corp. and Rockwell Automation Inc. Celltrio sells modules in the $100,000 range and completed systems up to $3 million.

“We have a very strong backlog/pipeline we’re building in life sciences,” Duncheon says. “Our challenge is going to be execution.” 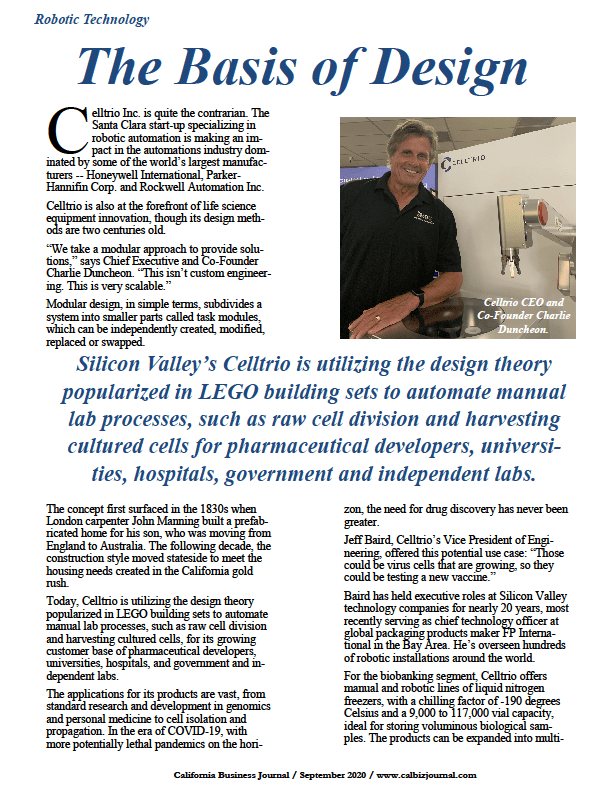 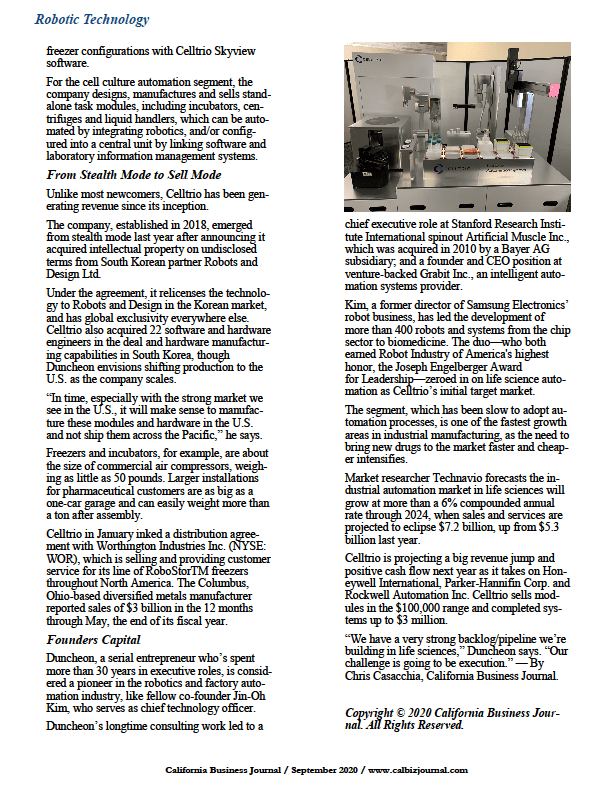 Unlock the Benefits of Automation Testing of Salesforce

The Advantages of Ammonia Compressors

How to Use Automated Technologies