As schools start the 2021 fall semester, school districts need to provide the safest environment for teachers and students as the spread of the more contagious Delta variant spreads.

K-12 schools are like a second office to Morrison, who previously founded Staymobile, which provides and manages laptops and tablets for school districts around the U.S. He is more than familiar with what a year’s worth of student usage can do to a laptop keyboard.

At one California school district, an administrator asked a simple question about the crumb-caked, germ-filled devices: How do they clean them? The question, which Morrison had never been asked before, stuck with him for years.

Morrison looked at what hospitals were doing for their staff with UV-C, a high-intensity light that eliminates 99.9% of pathogens and knew that it was a solution that schools could benefit from.

“We created INVZBL before coronavirus became a household name to help schools save time and keep people healthier. I had no idea how important – or how timely – it would be, especially as we now see surges from the Delta variant.”

INVZBL’s solutions include a ceiling-mounted panel that quietly eliminates 99.9% of airborne pathogens and recirculates air each hour.

Compared to models that sit on the floor, INVZBL’s in-ceiling air purifiers, which include proprietary nanomaterial coating, UV-C LED lighting and HEPA-carbon activated filters, register at 40 dbs, the same noise level as a library. A quiet system means teachers don’t have to raise their voices to be heard and the noise doesn’t distract students from learning.

“It also produces a remarkably fresh indoor environment – a noticeable difference in smell and just how clean it feels,” Morrison says. 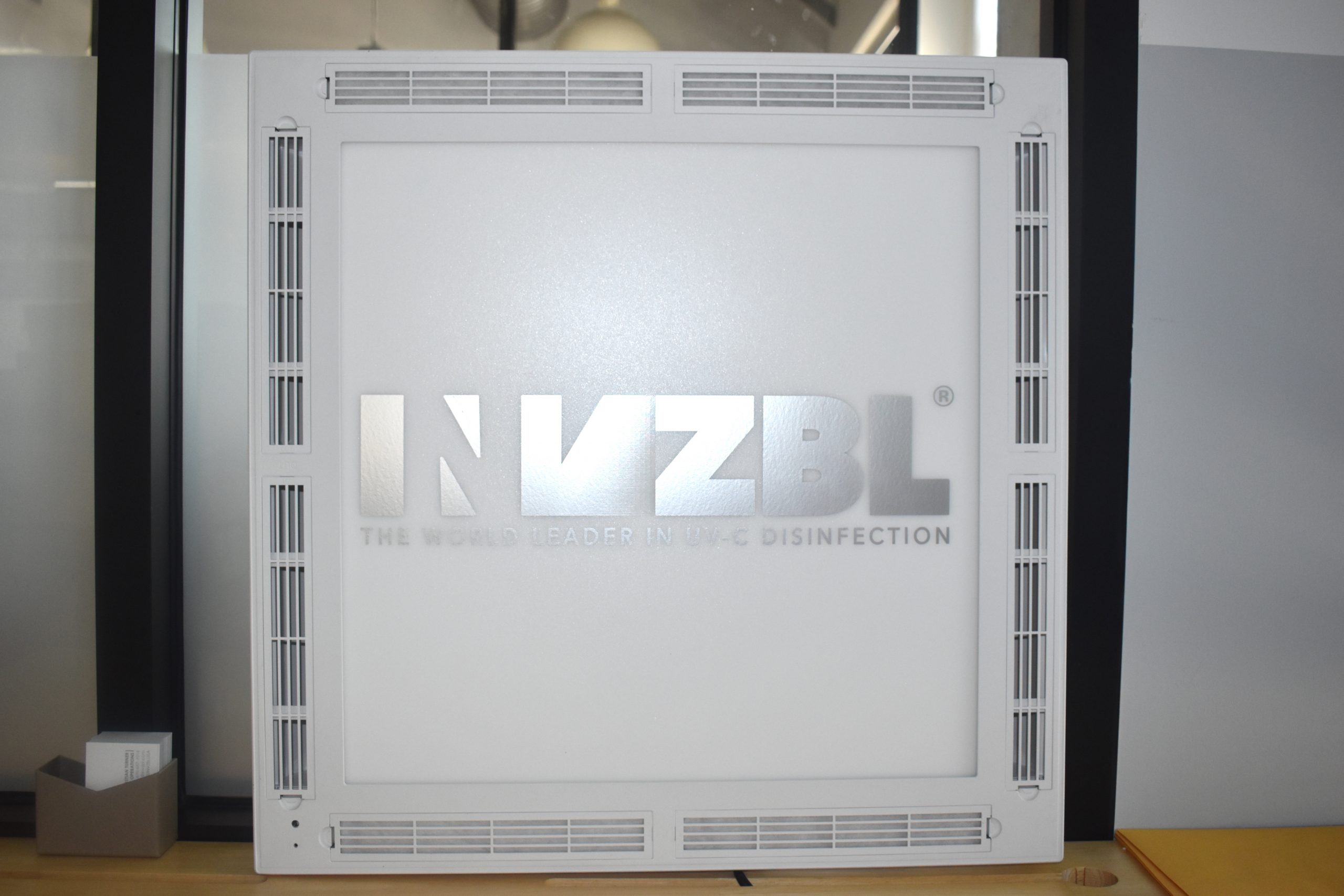 INVZBL’s UV-C cabinets disinfect laptops, tablets and phones in three minutes. Smaller UV-C-based boxes and pouches are available in retail stores for smartphones and sunglasses, but the INVZBL models are high-capacity units. Racks can be adjusted for everything from football helmets to baskets full of pens, pencils, and textbooks.

The cabinets are built at a factory in Wisconsin. Even though the facility was shut down briefly in March 2020, workers were assembling the cabinets and getting them to customers by late spring of last year.

They also secured UL registration and the data to back up the claims on what germs, viruses and other pathogens are killed in their hardware and at what speed.

“Some companies advertise based on how bright their lights are, but we have real data,” Morrison says.

And schools are listening.

Even as states ease restrictions and schools prepare to reopen, germs are never truly going to go away. When Morrison meets with school districts or state governments, they’re eager to find new and effective ways to keep their students and teachers safe.

Pre-pandemic, student absences were a significant challenge for districts. Students missing school for being ill not only impacts their education, but also the amount of funding some schools receive based on attendance.

Additionally, schools want to protect older teachers who are more susceptible to viruses.

While the country as a whole is challenged with filling jobs, so are schools, which are finding it difficult to hire and keep substitute teachers. As schools get ready for the 2021-2022 academic year, Morrison has added more than 30 new employees to support the client base. Most are on Morrison’s customer support team, ready to ensure a smooth reopening.

“I have the vision and creativity to get things started,” he says, “but having the right people is the key to make everything go. You’ve got to build that relationship with clients.”

Expansion plans are moving forward as INVZBL is currently in discussions with two major airports.

Prior to diving into tech and education, Morrison had a storied career as a serial entrepreneur. He enjoyed artistic success as the founder of a recording studio that landed a contract with Santa Monica-based LionsGate Films, from which he still receives royalty checks to this day.

Raised in North Carolina, Morrison’s hardworking parents and older siblings instilled in him a strong work ethic. “They loved to work and never complained,” he recalls. It was that lifelong “see what I can do, which paths I can take” mindset that guided him from project to project and still motivates him today.

Given his decades in business, it is Morrison’s southern humility that shines when asked how he sums up his success.

“I know what not to do,” he says with a smile. “Of all the companies I’ve founded and worked on, this one is set up for the best success.”