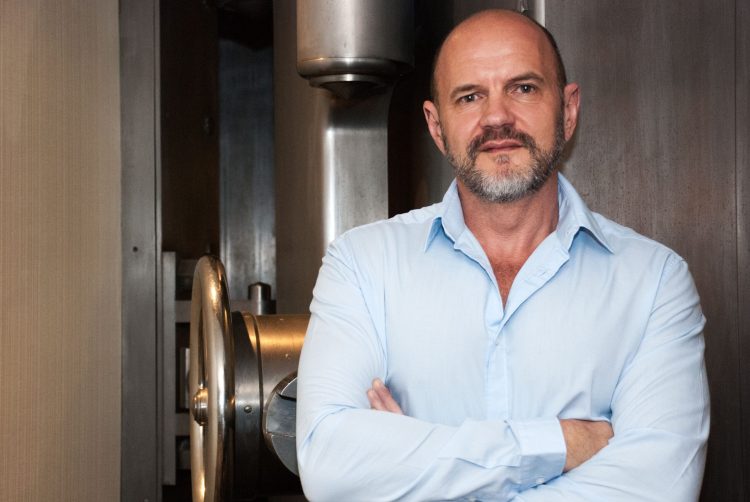 Ron Flavin has a unique grasp on the hurdles intended to intimidate applicants for grants and government contracts, thereby weeding out those who aren’t serious about the process.

The path to securing grant funding and government contracts is filled with overt paperwork, countless hours and cumbersome, comprehensive hurdles.

It’s a road that requires a trained compass.

A self-described “Opportunity Creator,” San Francisco-based Flavin has secured $400+ million in funding for clients via grants, contracts and strategic partnerships since founding his eponymous firm in 2002.

For Flavin (rflavin.com), hand-holding dreams into realities isn’t achieved via wishful thinking. “People come to me when they have broad ideas of what they want to accomplish, but they don’t know how to get from where they are, to where they want to be and see their project funded,” he says.

With his sweet spots ranging from tech and government/municipality funding, to mid-stage companies and nonprofits, Flavin’s secret comes from having amply worked both sides of the fund-raising equation. Concurrent to guiding his own clientele through the intimidating process of grant and contract acquisitions, he has also worked as a fund application reviewer for myriad entities, including federal agencies and departments ranging from the U.S. Departments of Treasury, Education, Health and Human Services and Energy, respectively.

“I’ve worked both sides – that’s the key,” he says. “I’ve gotten funding from almost all federal funding agencies and I’ve also worked as a reviewer or a review team leader for a lot of these agencies.”

With a succinct understanding of what a decision-maker wants to see to make a “Yes” decision for bestowing funds, Flavin, author of Business Grants: Everything you need to know to connect with local, state and Federal grants for business, has a unique grasp on the hurdles intended to intimidate applicants, thereby weeding out those who aren’t serious about the process.

“Going it alone is tough — really tough,” Flavin says of the nascent seeking grant funds or government contracts. “What I’ve found as a reviewer — and also working with my own clients — is that most people don’t know how to answer a question in the proper context.  The client isn’t looking at it from the decision-makers’ perspective. They’re looking at it from their own perspective, which isn’t the proper context.  There’s some ambiguity involved in the requirements and navigation is highly difficult for somebody who doesn’t have the experience.”

Nearly two decades into his métier, Flavin conjures something of a Sun Tzu perspective when prepping clients for pitches and applications; so said the general: Every battle is won before it’s ever fought.

To wit, Flavin’s approach and process is one of reverse-engineering: an understanding of what a decision-maker wants to see before the applicant’s initial approach even takes place.

“Some years ago, I wanted to start a manufacturing company, with the idea that Walmart would be our first customer, that we’d produce products for them,” Flavin says, providing his example of reverse-engineering.  “So, before even contacting Walmart, I conducted an immense amount of research into understanding how and why Walmart buyers made their contracting decisions.  I invested a substantial amount of time into it before even approaching them. Then when we went in to the Walmart meetings, we checked every single box on their list and walked out of that initial meeting with a vendor contract.  And it was because I knew exactly the questions they’d ask, and I had answers prepared for every single one of those questions.”

Securing government funding is also a Flavin specialty. He recently worked with the Nevada Fire District, which was aware of FEMA wildland fire mitigation funding through the California Office of Emergency Services.

“They contacted me and had a pretty good idea about how they wanted to use these funds, but they needed help in developing the program, the approach and articulating what was a broad vision.  They needed assistance with the step-by-step process, and turning that into a funding proposal which would resonate, and make understood their efforts to prevent loss of lives due to wildfires.”

Citing further successful proof-of-purchase, another Flavin client wasn’t about to be submerged on an episode of ABC’s Shark Tank. “Before the taping, we flew to L.A., and sat with our client, 15-year-old Benjamin Stern [Founder of Nohbo]. We sat for six hours and grilled him with every tough question which we were certain he’d be asked on the show.”

When the ‘Sharks’ asked him questions, he had an answer for every one. “And this was for a concept — he didn’t even have an actual product yet,” Flavin says.  When Mark Cuban asked, “How do you know people are even going to buy this product once you make it?” Stern reached into his pocket, and pulled out an e-mail from Hilton Hotels that read, ‘We love this idea.  If you make it, we’ll buy it.’ He ended up getting an offer from four of the five ‘Sharks,’ and ended up going with Cuban, who also offered him a mentorship.

Balancing the scales, Flavin has learned over time that, on occasion, some clients awake from their dreams.

“The client has to sell me on their dream.  If I don’t believe in that they want to do, it’s going to be really difficult for me to create a compelling pitch or proposal.  I have to believe that the client is truly serious about making their vision a reality – that they’re not just paying lip-service,” Flavin says of his careful client vetting process.  “I need to also know that they’re committed to providing me the information I need, and that they have the resources to actually make the project move forward once we go through the process of developing a funding strategy.  When it comes down to the process of presenting me the information, I need to make their project a success, they realized how much work is actually involved.  If the client isn’t willing to put in that effort, the project dies on the vine.”

Across the months of the novel coronavirus pandemic, grant and government funding activity is at an all-time high. The spring and summer of 2020 have found Ron Flavin, Inc. especially-immersed, with clients ranging from public safety, government agencies and indigenous tribes.

“I’ve been busier than ever,” he says. “I’m in a recession-proof business; whether times are good or bad, people – especially governments, communities, law enforcement – they always need money. And right now – whether it be local or federal governments, private sector, charitable foundations – a lot of different agencies have made funding available to support a broad range of stake-holders during the pandemic.” 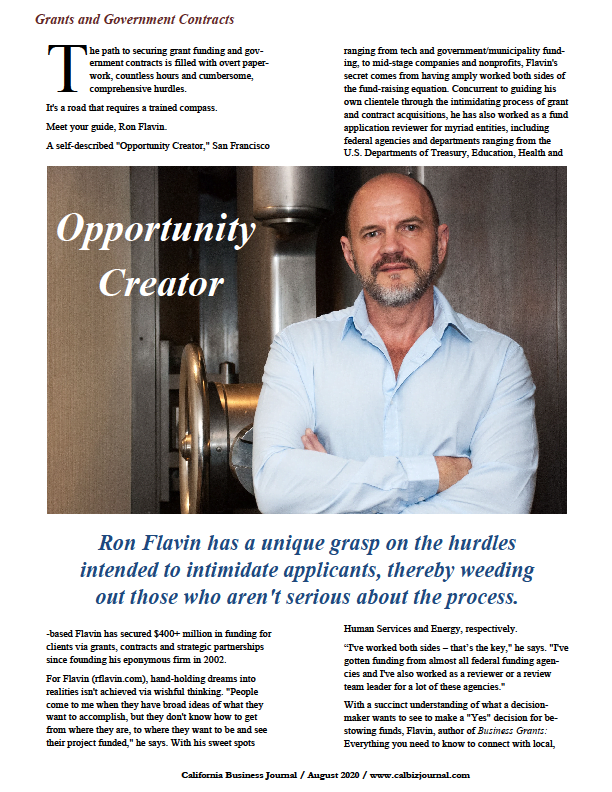 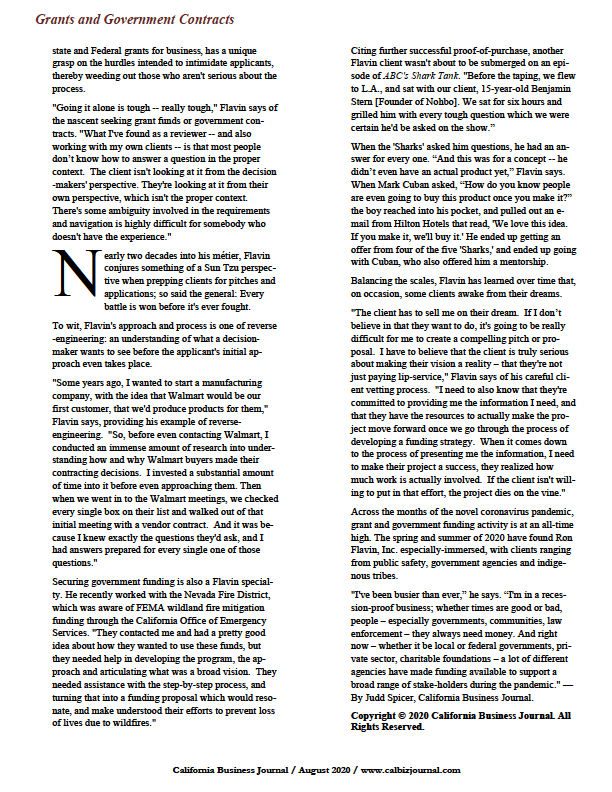