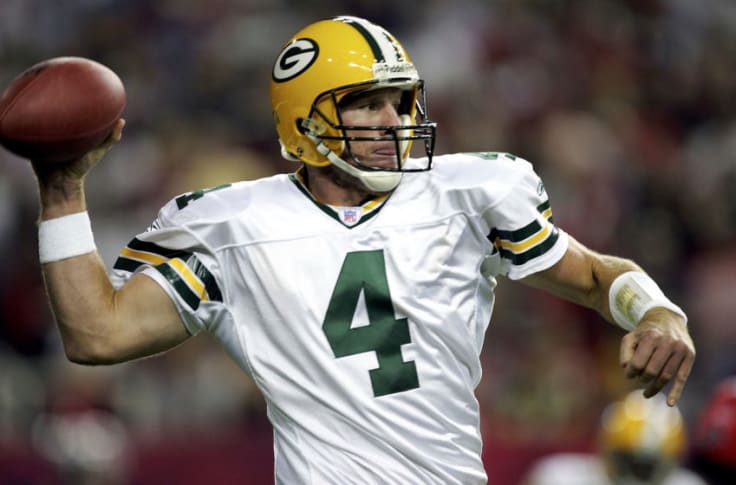 The Life And Career Of The NFL Legend.

Being selected early in the NFL Draft does not necessarily mean you are guaranteed success in the NFL.

We have also seen players that were picked later in the Draft go on to have incredible careers – Tom Brady was picked 199th in his year, and Packers legend Brett Favre was 33rd overall in the 1991 draft.

We are looking forward to the 2022 Draft to see which players have the biggest impact on the league – you can find NFL draft betting odds and much more here.

Favre was scouted at a high school game and offered a football scholarship at the University of Southern Mississippi. Favre spent all four of his college years there.

When he started with USM, the school wanted him to play in the Defensive Back role, so he took the spot as 7th quarterback, rather than starting DB.

Thanks to his performance in training sessions, Farve took over the role of starting quarterback by the third game of the season.

In his final year, Favre was involved in a car crash that nearly killed him. He lost 30 inches of his lower intestine and was told he might never be able to play football again.

Favre ended up playing in the team’s next game two months later.

In the 1991 Draft, Favre was the first pick of the 2nd round, 33rd pick overall. Some disapproved of the pick, and Farve played in only two games that year before he was traded to the Packers.

During his 15 years with the Packers, Favre set many franchise and NFL records. He became the first quarterback to beat all 32 NFL teams (a week before both Tom Brady and Payton Manning did the same).

He is also the only quarterback to win the NFL MVP award three years in a row. He did this between 1995-1997. In that middle year, he led the Green Bay Packers to their first Super Bowl victory in 30 years. They had not won it since Super Bowl 2.

When he retired, Favre held multiple passing and touchdown records – most of which have now been passed by Tom Brady or Aaron Rodgers. He ended his career with 6,300 completed passes for 71,838 yards.

Favre moved from the Packers to the New York Jets in 2008 and spent a single season with the team. His tenure was marked with controversy as he injured his shoulder partway through the season and when it was not reported by the team, it was fined $125,000.

Farve spent his final two seasons with the Minnesota Vikings. During this time, Farve was plagued with head injuries, memory loss, and concussion. When he retired, Farve said that other parts of his body could go on – but he was seriously worried about the memory loss he was experiencing.

He has since been a big supporter of the new measures the NFL has brought in to help reduce concussions during play.

Farve was one of the only players to become a Grandfather while he was still an active player.

He does a lot of charity work in his adopted state of Wisconsin and his home state Mississippi – where the Brett Favre Forward Foundation is based.

In 2020, one of Farve’s companies was investigated for embezzlement that had supposedly been put aside by the government to help families at risk. It was found that Farve was paid $2 million for two events he did not speak at and they had taken other funds too. Farve claimed that he was not aware of this, and had to repay the money.

Here are some of the best articles on Favre

NFL Paychecks: How Do NFL Players Get Paid?