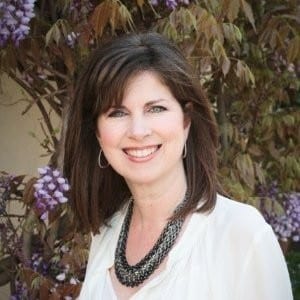 But Meldie Moore, founder and principal of Moore Law for Children in Laguna Beach, California, isn’t your typical attorney.

A fierce advocate for children and families, Moore has gone from a 16-year career as a prosecutor to launching her own firm (MooreLawOC.com) after she became a mother. Incidentally, she became mother to her sons, who are eight years apart, the same year – one via adoption and the other through assisted reproduction.

Her ability to relate to the struggles of her clients is one of her greatest strengths, because she’s been through similar circumstances and has fought for — or against — many of the issues that challenge families today.

After completing her undergraduate degree in Pennsylvania with honors, Moore wasn’t quite sure what she wanted to do. She considered becoming an elementary school teacher or child psychologist, but her parents encouraged her to pursue law.  After being accepted to law school at Pepperdine University, she moved to California and began her legal career.

“In law school I became very interested in women and children’s rights and I thought  I would do legislative work so I could write laws to protect the most vulnerable,” she says. “Then I did an internship with the L.A. County Counsel, the government agency responsible for prosecuting child abuse and neglect cases.  I was worried at first because I was afraid it would be too heart wrenching. However, I discovered if I worked on a case-by-case basis, I could handle it. Some cases stick with me to this day, though.”

The frustration of seeing many of the issues with children and families repeated again and again in dependency court made her want to take a more pivotal role in protecting children. So after graduating law school, she went to work for the DA’s office in Orange County.  There, it was typical to spend a year or two in each department. She worked in law and motion, juvenile court, general misdemeanors, general felonies, and then specialized in motions and appeals and the domestic violence unit, where she remained for several years.

“During this time, for about eight years, we were trying to have a baby and tried everything, including fertility treatments, private adoption, and training to become foster parents,” Moore says. “We fostered one boy who went back to his family. The woman who trained us came to me and said, ‘I want you to meet this little four year old boy,’ and we ended up fostering and adopting him. But we missed his first four years, and I still longed for a baby, so we decided to try one more time and I got pregnant the year the adoption finalized. We got two boys the same year and they are the light of my life.”

After taking a year off, Moore returned to work part time at the DA’s office, still working in domestic violence, but her heart wasn’t in it as it had been before.

“Being away from crime for a year changed my mindset,” she says. “Everyone in court is either being charged with a crime or a victim, or their family member is being charged or is a victim, so no one is happy. I had a good friend who was job sharing with me and she had a son with autism, who was my older son’s age. She said, ‘Let’s leave. Let’s start our own law firm with a focus on special ed.’ And you know what? I realized that I had never even thought of any other types of law I would be interested in practicing.”

It took her about three months to make the decision. Though she felt being a prosecutor was a special calling that allowed her to truly make a difference, she couldn’t deny the flexibility of being her own boss which would be the ideal situation while raising her family. As they began mapping out their business plan, she decided she wanted to expand the practice from special education to include other areas of children’s law, such as adoption and fertility contracts. Advocating for children and families with education struggles was still paramount.

“Often parents do not realize they have recourse if their child is not getting the help they need in school,” she says. “There are so many different types of learning challenges and diagnoses that can prevent children from performing academically and socially, and the parents, teachers and schools might be at a loss to identify the issue or find the right solution to address the needs. If it goes on too long, the damage to a child’s self-esteem can be extremely difficult to repair.”

Her law partner left after a year and a half to become a full-time mother.  Since then, the practice has continued to thrive with Moore at the helm. Her understanding of education and behavioral struggles, informed by years of working with children in the juvenile system, give her an acute insight into what might be going on with a family’s struggle.

“Children don’t want negative attention. They are always reacting to something, whether it’s internal or external forces,” she says. “It might be autism or ADHD or a reaction to what is going on around them, such as instability in the home.”

Moore loves to discover the root of the problem to seek the appropriate remedy so that children can succeed in school and be happy. 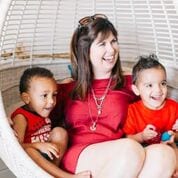 One of the additional specializations Moore added to her practice is fertility and reproduction law. With medical technology progressing at warp speed, it’s difficult for the law or ethics debate to keep up. Assisted reproduction, such as sperm and egg donation, and surrogacy, involve a web of legalities that vary from state to state and internationally.

If it seems like celebrities are having babies via surrogate frequently these days, you would be correct. What was previously considered risky (the fear of a surrogate mother changing her mind and keeping the child) has largely been rectified with medical technology allowing in vitro fertilization using the Intended Parents sperm and eggs, or that of a donor.

“There are two types of surrogacy,” Moore says. Traditional is when the surrogate’s egg is used. Those are largely frowned upon now.  What the law advises is gestational surrogacy, where the surrogate is implanted with an egg that is not her own. “It’s not her egg so she doesn’t have any genetic ties to the baby. It is the safer way to go because it’s purely a contractual relationship. The surrogate has no legal claim to the child so there is a lot less litigation.”

Not surprisingly, California has some of the most progressive laws on the books in this sensitive field, while in other states, it’s still illegal or not addressed at all. Because of this, California attorneys with clear knowledge are in high demand.

Moore has gathered a team who has personal connection to the issues her clients face.  The team includes an adoptive mother, an adoptee, a birth mother, a former special education teacher, and a mother of special needs children. The combination of personal experience, education, training and legal experience, makes Moore Law for Children uniquely qualified to handle these cases.  Going forward, Moore and her staff of six plan to further expand into other aspects of family related law, such as custody and estate planning, because, as she says, they frequently have overlapping issues. “To do the best for children and families, we need to advise and assist with all aspects that can affect these children.” 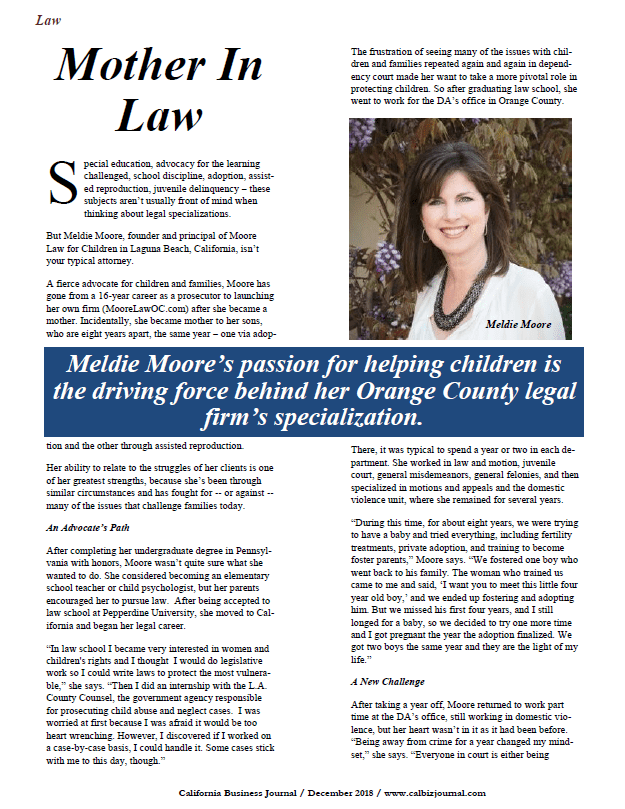 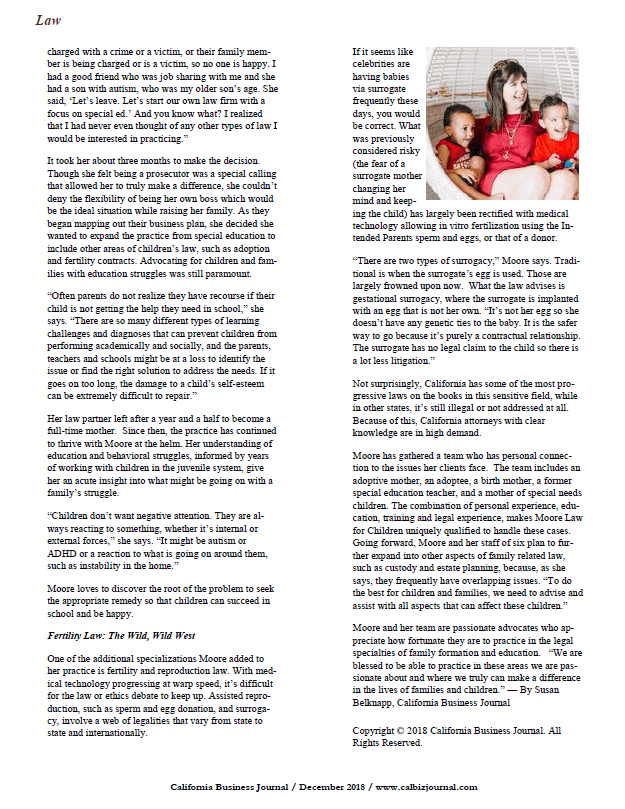