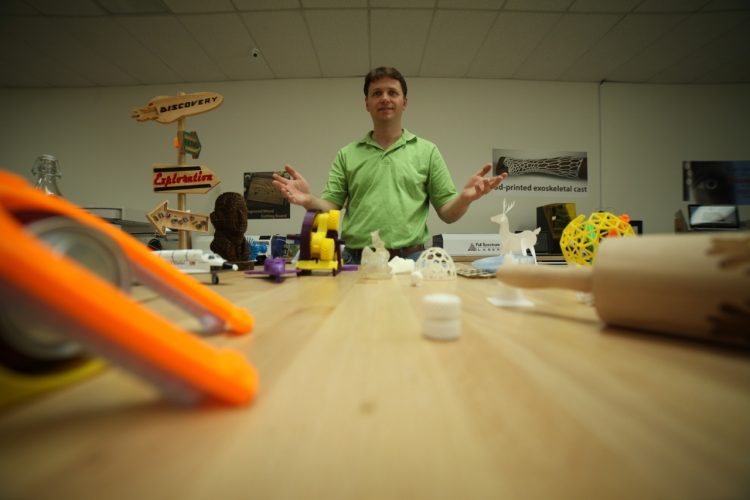 3D printing prototying work spaces are popping up all over Southern California. And one of the most unique facilities is Built It Workspace in Los Alamitos.

THE URGE WAS INCREASING A LITTLE BIT MORE EVERY DAY, EVERY WEEK, EVERY MONTH.

All around him, Mark Lengsfeld kept hearing and seeing a new industrial revolution taking place: new Built-it-Yourself, Make-It-Yourself and Do-It-Yourself work spaces popping up throughout the country — highlighted by the use of 3D printers, the latest craze in the innovative world of technology.

At the time, Lengsfeld was a Project Manager for Flowserve, one of the world’s largest manufacturers of pumps, valves, seals and components. Yet the desire to start his own company was overtaking his mind, his heart, his soul.

Finally, earlier this year, he made the decision: leave his secure position at Flowserve and launch Build It Workspace in Los Alamitos, a membership-based operation that is capitalizing on and satisfying the demand for affordable access to industrial tools and shared work spaces.

He calls Build It Workspace “an open-access prototyping shop where people can make whatever they want” – from Statue of Liberty figurines and jewelry to IPhone cases, toys and silverware — and they do it by tapping into their own creativity and craftsmanship instead of outsourcing the labor … or buying it off the shelve at a store.

“What we’re finding about the market is people who are new to it look at a 3D printer or laser cutter and say, ‘This is really cool but what can I actually make?’”

The answer is virtually anything: shoes, hats, chess pieces (and the chess board), your own super-figurines, a lock and key, a sprinkler. The list goes on and on. Name it and you can make it.

Moreover, imagine breaking an item in your home or work, such as a bracket. Finding or getting a replacement piece can be expensive and time consuming. Well, Lengsfeld or anyone of the other mechanical engineers on his staff can produce a replacement piece for you in minutes — or teach you how to do it.

Thanks to today’s incredible maker movement revolution, people have reconnected with the idea of “do-it-yourself” and working with their hands – an old concept in a new world of innovative technology that literally boggles the mind and rekindles creativity.

At places like Built It Workspace, students who no longer have access to wood and machine shops in school can come and create. So can an entrepreneur who has an innovative idea but not enough capital to invest in the equipment necessary to build a prototype. Basically, people of all backgrounds come together, by themselves or in groups, to work, collaborate and create.

“We wanted to give the community a place to come in, use our tools, learn and make anything they desired, whether it was something for fun or something they really needed,” Lengsfeld says.

A father and son – or grandfather and grandson – can step into Build It Workspace and truly bond in a special and unique way by working on a variety of “Make-It-Yourself” projects, gadgets or toys. Imagine coming in to handcraft a Father’s Day – or Mother’s Day’s — gift?

Don’t know how use a 3D printer or laser cutter? No problem. Come in, and take a class at BIW, learn the basics, build a product and even get ideas and suggestions on how to market it — all in the same building.

It is 6 p.m. as the crowd filters in to Build It Workspace for a special event to see what this new “maker movement” is all about.

On a large table in the back of the facility, there are more than 20 items on display that Lengsfeld created with his 3D printer, laser cutter and other equipment.

“What? You made all these from a 3D printer?” says a surprised Toni Hauger, holding a horseshoe in one hand and the Eiffel Tower in another. “Wow. I’m astonished. I don’t believe people can make things like these now on their own.”

A couple feet away, LeAnna Ferris is holding a coffee cup and cup holder. “It’s truly unbelievable,” she says, shaking her head. “I never thought this it was possible to make this yourself.”

The “maker movement” has completely taken the U.S. by storm. This revolution began taking shape in the Bay Area less than 10 years ago. Little by little, it’s grown … enormously.

Even “Maker Faires,” a gathering of people interested in building, tinkering, and creating things from scratch, are now popping up all over the U.S. Two years ago, a Maker Faire in San Jose attracted 10,000 people. Last year, 100,000 technically-minded people attended, hauling along with them robots and software that they had built in their garages and workshops. The events also attracts knitters, woodworkers, and other traditional artisans and hobbyists.

The crowd at Build It Workspace zeros in on Lengsfeld as he leans toward his 3D Printer, the Star Of Tonight’s Show, the piece of equipment that has caught the attention of everyone in the world, let alone the folks here tonight.

“3D printing has come a long way – and this is a perfect example,” he says, turning toward his laptop. “All you do is download your files and open a basic software, configure it, hit ‘make it’ and you’re done.”

At that moment, the 3D printer begins zipping back and forth, north and south – all directed and dictated by the software.

The crowd of people watch in stunned amazement and silence as Lengsfeld produces a small item that he made in minutes with his 3D printer. He holds it up – a two-inch figurine of a character you’d see in Star Wars or a cartoon.

Yes, it’s that simply – and extraordinary. Just think, you accidently break or lose a part to anything at home or work or wherever and you can instantly create a new one, sometimes in a matter of minutes.

Case in point: While riding his motorcycle, John Osborn fell and broke a small piece on the 12-volt power supply mounted to the handle bars. Instead of scouring the internet to find the part, order it and wait for it to be delivered, he went to Build It Workspace and created the piece instantly – “and it was better than the original,” he says.

Verson Jensen uses heavy tripods for various land-related projects – and he had an idea to create a new adapter that would lighten his equipment load. Enter Build It Workspace. Lengsfeld helped Jensen create a new, lighter adapter – “and it worked perfectly,” Jensen says. He is now thinking about marketing his creation to the industry.

Lengsfeld is all about ideas – he has been from virtually from Day 1. Which is not surprising at all considering he comes from a family whose IQ combined is so off the charts it would need to be calculated in terms of googolplex.

Lengsfeld often jokes that he considers himself “the weakest technically” in his family.

“My brother is a Mechanical Engineer with a BA and Masters in Material Sciences – and he also has a BA in economics. His wife has a PhD in Engineering. My sister has a PhD in Microbiology and her husband has a dual Bachelors and a Masters.”

“And me?” Lengsfeld says with a laughs. “I have a BA in Mechanical Engineering and I went easy unlike the others in my family — I got my MBA instead of a Masters of Science.”

Quite a family to say the least. Imagine the dinner conversation in this family?

From the beginning, Lengsfeld, thanks to his DNA and his cultural environment, has been a thinker, an idea guy. He’s always thinking about how to make things better. When he walks down the isle of a store like Home Depot, he looks at a product and often thinks to himself, “There’s a way to make this better.”

Always thinking, always looking at the world and its components in a profound and captivating way.

“I have a love for objects and I want to make them functional and useful for people,” he says.

So as Lengsfeld witnessed this Maker Movement explosion, he decided, that was it – it was time to join in. His wife, Catherine, was all for it, backing him 100 percent.

“Mark was a little nervous about leaving a stable full-time job with a regular paycheck,” she says. “I wasn’t nervous. I knew that if he put in the effort to this like he always did in his corporate job, he’d be successful.”

So it was full steam ahead. He found an ideal space and he equipped it with his “new toys,” some of which had been purchased months earlier.

“Our Christmas and anniversary presents to each other,” he says with a laugh, “were a 3D printer and laser cutter.” 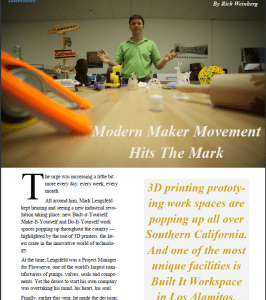 Planning to Open a Woodworking Business?

5 Things to Consider When Building Your Own Workspace